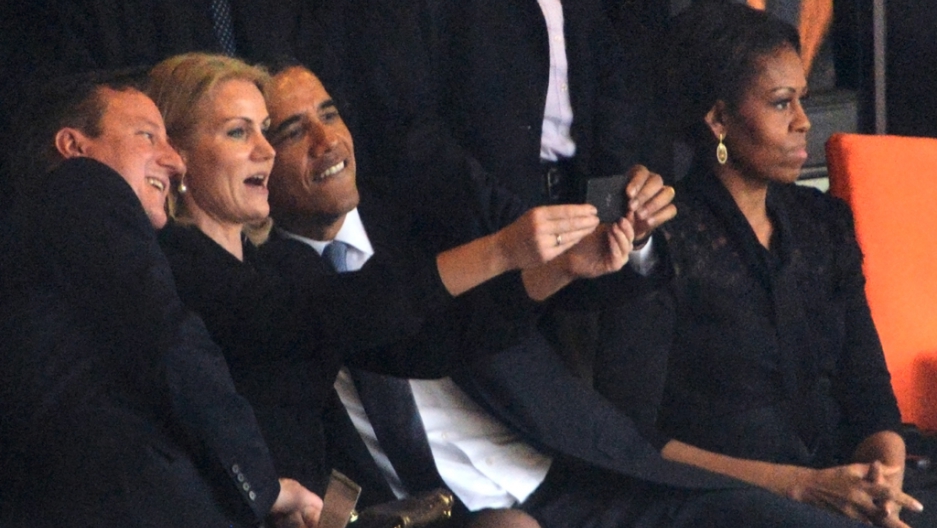 It may be the Oxford Dictionaries word of the year, but a selfie at the memorial service for one of the greatest leaders in modern history?

Maybe not the best idea.

President Barack Obama and other world leaders are taking heat after either snapping or posing for selfies during Tuesday's memorial service for former South African President Nelson Mandela.

A visibly displeased Michelle Obama is seen sitting to the left of the group.

The photo was quickly posted to the "Selfies at Funerals" Tumblr blog and was making its way around social media Tuesday afternoon.

Thorning-Schmidt took some heat from constituents on Twitter, while right-wing pundits and politicians were quick to jump on Obama for what some perceived as inappropriate behavior.

"Thank you Mrs. Obama for knowing how to behave at a funeral," tweeted RedState.com's Erick Erickson.

The Telegraph's Iain Martin let Cameron have it:

"What on earth is going on? Why do world leaders now behave like this? And at a memorial service?" he said. "I saw that selfie picture and my response was simple and from the gut: what the hell do you think you're doing man? Whatever it is stop it."

Others, like The Huffington Post's UK team, tried to recreate the moment:

Though not technically a selfie, former President George W. Bush posted a photo of himself posing with Bono at the memorial service to his Instagram account.

Nearly 100 world leaders gathered for the memorial service in Soweto for the anti-apartheid icon.