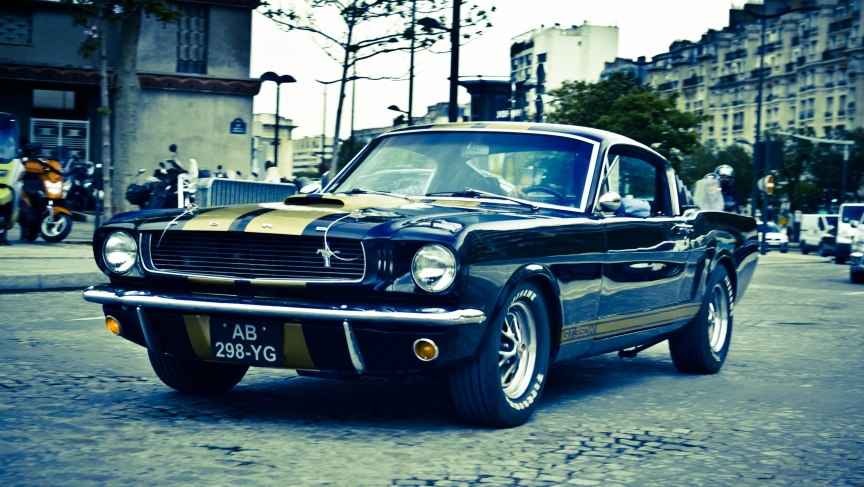 I'm 16 years old, and I have just gotten my driver's license. My grandmother has just decided to get rid of her car, a fire-engine red 1967 Ford Mustang.

The car's only got about 10,000 miles on it. When you open the heavy door, you can smell grandma’s cigarette smoke still clinging to the leather interior. The keys are handed to me with the curt warning: "Don't wreck it."

I turn it over, and the throaty hum of that massive V-8 engine hits me. I suddenly have visions of Steve McQueen and his sweet ’68 ride in Bullitt running through my head. But I live in the Midwest, and there’s not a San Fran style hill around for miles. And miles.

It hardly matters, though. Talk all you want to about how it looks, but with a Mustang, I think you fall in love with the sound first.

Growing up, taking that car up to 100mph on back roads in Indiana, I never dreamed that my life-long love of Ford's pony car would be shared overseas.

“We love the V-8 sound. It’s a 50-year love affair,” says Tord Jonsson of Malmo, Sweden, who fell in love with Mustangs as a teenager back in 1964 when he saw one on the cover of a magazine.

Jonsson bought his first one, used, in the late 70s. “I bought a ‘66 Fastback, and I still have it in my possession.”

That Fastback has been joined by two others over the years. In the meantime, Jonnson and some buddies started up a Mustang club in Sweden, and then merged with another club. Today, Jonsson chairs a Mustang club with a membership of more than 3,000.

No, Jonsson's not a casual fan.

He even traveled to Barcelona last week to see the unveiling of Ford's 2015 model. The company did the reveal in six different cities around the world on the same day. Australia, China and Europe are expected to be the major markets.

Jonsson's take on the new model? "It was love at first sight, again."

It is part of a major global push for this most American of cars. The Mustang hasn't been sold directly to overseas buyers since 1979. Of course, you could get a hold of used ones, and many people around the globe have.

So what's the new sales pitch to the global audience for the 2015 model?

This Mustang is more Mustang than any other Mustang.

“If you look at this silhouette, what you see is a bloodline,” said Ford's Chief Design Officer Jay Mays as he introduced the new model.  “And it runs back and courses through the veins of every Mustang back to 1964 and a half.”

Bloodlines. OK. But seriously, is there really global demand for a gas-guzzling American muscle car?

“It's interesting. The Mustang is probably the best known and best loved car that's never really been sold here officially,” said Jack Rix, news editor for Britain’s Auto Express magazine, in an interview with the BBC. “So, there's lots of well meaning for it. And everyone's looking forward to it. It's a great story. Quite impressive.”

"People don't drive the car. They drive a story. This is about America. This is about Hollywood. This is about Steve McQueen and Bullitt,” says Clotaire Rapaille, head of a company called Archetype Discoveries Worldwide. Rapaille's a marketing and branding expert with long experience working with brands like Chrysler and GM.

The key for Ford overseas, Rapaille says, is to fully embrace its American-ness.

“People around the world are confused, with social media and everything, so many choices, they're confused. They want a strong identity. “

To be clear, Rapaille's not working with Ford on the 2015 Mustang. But he's willing to offer an opinion on why it might sell outside the US.

“The problem is that most of the American cars have become too Europeanized. They look like European cars now. And they try to compete with European cars, and they lost some of their identity. And what is crucial here for the success of the Mustang, is to preserve a strong, strong identity. People aren't going to buy the Mustang if it looks like something else. It has to have a special look.”

“The looks? Yeah, it’s got the looks,” says Jack Rix. “Whether people will put their hands in their pockets and buy one, that’s another thing.”

Tord Jonsson in Sweden says he expects the new Ford to retail for around $75,000. Ouch. And, Rix notes, the V-8 model might only get you into the teens in gas mileage.

But Ford is making some modifications. It says it will offer a version of the 2015 with a smaller, "eco-boost" engine. That might be some comfort for places in the world where gas tops 7 bucks a gallon. Not that Clotaire Rapaille thinks anyone's brain will actually WANT an “eco-boosted” Mustang.

“The cortex always wants to be safe, and secure, and get good gas mileage. But my theory is the reptilian always wins. You want to be reptilian brain — powerful, muscle, stronger, bigger.”

As if to prove the point, I got in touch with Jarek Rosol, owner of two Mustangs and active member of the Mustang Club of Poland. I asked him what he thought of the 2015. "I like it. It's fresh," he told me. "I love the V-8. If you want something with a smaller engine, you can buy German or Japanese stuff."

So, just remember what your lizard-brain is telling you when you find yourself standing in a Ford showroom next year.

Oh, and as Grandma always said: "Remember to kick the tires."