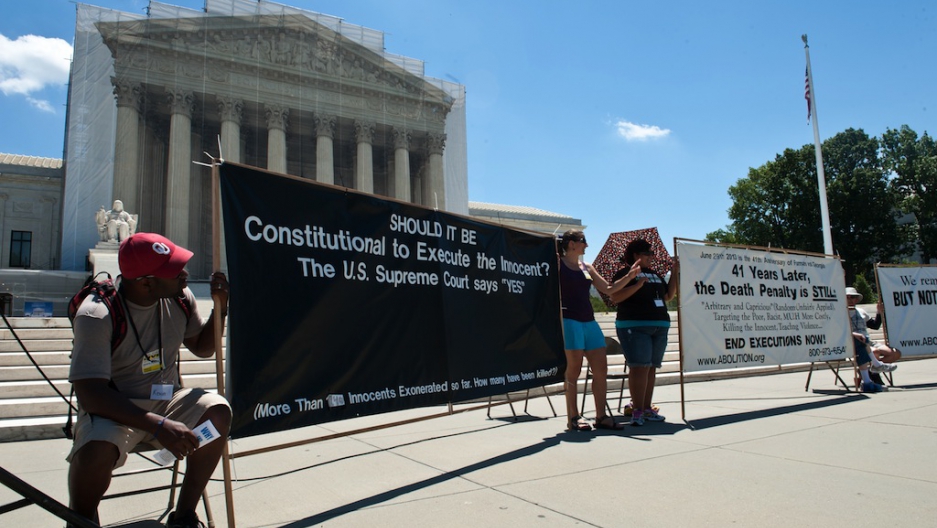 The 20th annual Starvin' for Justice fast and vigil against the death penalty in front of the US Supreme Court in Washington on June 29, 2013.
Credit: Nicholas Kamm
Share

GENEVA — Which country will be the last to abolish the death penalty?

Not so long ago, posing such a question would have seemed overly optimistic at best, and naïve at worst. But as we mark Human Rights Day on Dec. 10 — the 65th anniversary of the United Nations’ adoption of the Universal Declaration of Human Rights — we do so knowing that the global outlook is shifting rapidly. The tide has turned irreversibly in the long battle against the death penalty, an inherently cruel and deeply flawed punishment that has done incalculable damage to countless individual lives and whole societies.

As understanding has grown that capital punishment is an abhorrence unworthy of a civilized society, government after government — from all major regions, cultures and religions — has rejected it.

They have done so because experience and evidence demonstrate that the death penalty is cruel, irrevocable and a violation of the right to life. It damages and poisons society by endorsing violence, and by causing injustice and suffering. It has no particular deterrent effect on violent crime, and in fact abolitionist nations often have lower murder rates than those that still execute.

Not only have most individual governments concluded that the death penalty is wrong. Increasingly the world’s community of nations is sending a clear, collective and powerful political message that there is no place for capital punishment in humanity’s future.

In December 2012, the UN General Assembly voted overwhelmingly and decisively for a global moratorium on the death penalty. This was the fourth such vote since 2007; on every occasion the number of nations supporting a moratorium has risen.

This latest UN call was supported by a record 111 countries, with Central African Republic, Niger, South Sudan and Tunisia all voting in favor for the first time. Meanwhile, several nations — including Afghanistan, Papua New Guinea and Indonesia — moved from a negative vote to abstention.

Such categorical, undeniable and remarkable progress explains why we at the International Commission against the Death Penalty — an independent body opposed to capital punishment in all cases, led by a group of high-profile commissioners from across the world – are convinced that capital punishment is steadily, inexorably moving toward the history books.

At the same time, we know there can be no complacency. Recent executions or resumptions of death sentences after de facto moratoriums in countries such as India, Indonesia, Kuwait and Nigeria have all caused international concern.

A major stumbling block is the behavior of a small group of hard-core executing states. The world’s most prolific executioners are China, Iran, Iraq, North Korea, Saudi Arabia, the US and Yemen.

More from GlobalPost: European companies squeeze US over death penalty

The inclusion of the United States in this list is regrettable, yet there are grounds for hope. Across the US, numbers of executions and death sentences are declining as courts impose life imprisonment instead, while public support for capital punishment has dwindled to its lowest levels in nearly four decades. Connecticut, Illinois, New Jersey, New Mexico and New York have abolished the practice in recent years, while Oregon imposed a moratorium on executions.

Legislation repealing Maryland’s death penalty came into effect on October 1, following a vote by the House of Delegates in March and Governor Martin O’Malley’s subsequent signing of the decision into law. With the stroke of a pen, Maryland became the 18th state, and the sixth in as many years, to become abolitionist.

Meanwhile, other states such as Colorado, Delaware, Oregon and New Hampshire are moving closer to abolition.

Former President Jimmy Carter’s call ilast month for a nationwide moratorium on the death penalty — and for the US Supreme Court to reintroduce the ban on capital punishment it had imposed between 1972 and 1976 — is most welcome.

Globally, it is clearer than ever that abolition is politically right and politically possible. Any objective assessment shows that full global abolition would be a true victory for humanity. Fortunately, the question now is no longer one of “if” but one of “when.”

Increasingly, it will also be a question of “who”: Which nation will be the last, lonely outpost of state killing? Which will be the last to cross the threshold to a modern, civilized system of justice by finally abolishing this cruel, inhuman and degrading punishment?

Every executing state still has the choice and the opportunity not to be burdened with such an unenviable legacy. As we shine a spotlight on this ultimate abuse of human rights today, the message is clear: With political courage, every nation could immediately suspend use of the death penalty as a step toward full abolition.

The writers are members of the International Commission against the Death Penalty, an independent body of politically influential people supported by a diverse group of 16 governments. Bill Richardson is former Governor of New Mexico, US. Federico Mayor is President of ICDP and former Director General, UNESCO and former Minister of Education and Science of Spain.