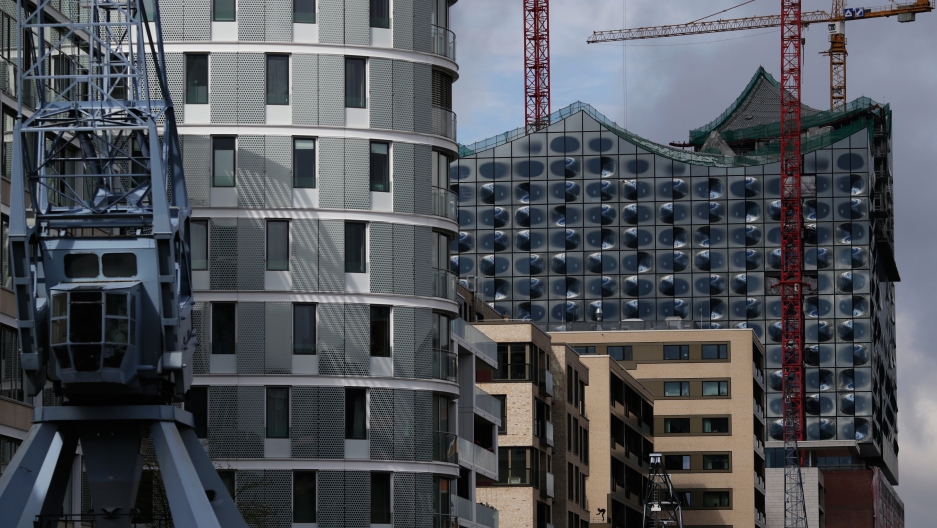 HAMBURG, Germany — The Elbe Philharmonic Hall may become an architectural marvel that will revive this city’s fading glory — or go down in history as one of the country’s colossal engineering failures.

Sipping espresso in a cafe opposite the building site in Hamburg harbor, Josephine, a 28-year-old banker, says Europe’s second-largest port needs “something special” to attract big ships such as the Queen Mary.

“But I'm very disappointed about the problems and the cost — which has exploded,” she says.

Builders now expect the Elbe Philharmonic Hall — once budgeted to cost around $325 million and expected to be finished by 2010 — to tip past $1 billion even if all goes well and open in the spring of 2017.

Renowned for companies like BMW and Daimler-Benz, Germany has thrived for decades on an export-oriented economy founded on the clockwork precision of its engineering. Infrastructure-related products and machinery account for half the country’s exports.

Even during the euro crisis, German firms have capitalized on oil-rich countries' appetite for superlatives and maintained a coveted trade surplus with China.

But a series of high-profile failures are threatening Germany's longstanding reputation for speed and efficiency.

"It's bad for our good image," Walter Boerman, spokesman for a German engineering association, told AFP earlier this year.

Once forecast to cost a mere $1.6 billion and be finished as early as 2007, the Berlin-Brandenburg Airport has already cost more than $4.3 billion, and there’s still no opening date in sight because no one seems to be able to unsnarl failures in the fire safety system.

In Stuttgart, estimated costs for a new, high-speed railway station deep beneath the city have ballooned to $8.8 billion from $6 billion. Entrenched local opposition and unprecedented engineering challenges make it impossible to predict the final bill or when the project will be completed.

Back in Hamburg, Heinrich, a 63-year-old businessman, calls the philharmonic hall’s cost “unbelievable.”

Perhaps, but not inexplicable — and not actually the fault of Germany's engineers, many believe. Observers say politicians and bureaucrats are really to blame.

In all three cases, city and state officials slashed budgets and moved up deadlines to get projects approved and win points with voters. In the process, they set their engineers impossible tasks, then ensured their failure by rushing the projects along.

For the Berlin airport, project planners scrapped a privatization deal that would have put a private contractor in charge of construction, liable for all the financial risk, in favor of creating a management structure that made it virtually impossible for the builders to succeed, says transportation and infrastructure expert Dieter Schneiderbauer of ECM Ventures.

“I'm positive that if they’d signed the general contractor agreement, the airport would have been opened in 2011 and would have run smoothly.”

Instead, a screwball contract structure put an inexperienced team of bureaucrats in charge of the builder and architecture firm.

Experts say the government set an arbitrary completion deadline for political reasons that had everyone scrambling.

When inspectors showed up to test the smoke alarms and ventilation system, no one could produce the right documentation or even demonstrate it actually worked.

“It was politicians mingling with contractors and putting demands on them,” Schneiderbauer said. “It was simply poor management rather than poor engineering.”

A storied commercial and financial center since the Middle Ages, Hamburg remains one of Germany’s wealthiest cities. Confronted with the fading importance of its port, however, the authorities launched one of Europe's largest redevelopment projects — dubbed the HafenCity — in 2000.

The original scheme was to convert a forest of cranes and warehouses into a media hub that would employ some 40,000 people along with other businesses. But as the media business began to decline, the city targeted tourism instead, and plans for a simple shoebox were shelved in favor of a concert hall designed to do for Hamburg what the Opera House did for Sydney.

First imagined as a modest cultural project, it was given a bargain-basement budget and assigned to the city's culture department rather than an agency more experienced in infrastructure projects.

As the blueprints expanded to incorporate a high-rise hotel, 45 multi-million-dollar apartments and three concert halls that would present an unprecedented engineering challenge, Hamburg put bureaucrats schooled in scheduling festivals sandwiched between one of the world's most renowned architecture firms and Germany's largest construction company, Hochtief.

With a new contract that makes clear that Hochtief is running the show, the company and the city say the project is now weeks ahead of its revised schedule and slated for rapid completion.

Still, the original plan has already cost the city millions of dollars in legal fees and years of delays as a spat between the architect and builder inched through the courts.

“This was the main problem for the whole project,” said Bernd Pütter, head of corporate communications for Hochtief. “It's so complex, not only in terms of the technical equipment but also in terms of the contract.”

Inside the construction site, observers can already see signs of breathtaking results in the bare bones of the steep-sided main concert hall and penthouse apartments, where peaked ceilings follow the contours of the building's tent-like roof and reflective, bubbled glass walls offer a panoramic view of the harbor and steeples of the city's many churches.

The entire 12,500-ton main concert hall rests on giant spring assemblies to insulate it from the vibrations of passing ships. And renowned acoustics expert Yasuhita Toyota had to design and redesign a special new material for the “white skin” of the walls due to the especially steep seating: The audience will surround and loom over the orchestra in another first-of-its-kind design.

But setting the bar so high created serious problems, both in terms of project execution and public perception.

More from GlobalPost: UK: A rebound on paper, but not in pockets

Despite the obstacles, there’s optimism the price will be worth it. More than a million people attend events at the Sydney Opera House and another seven million tourists show up to gawk at the building each year.

Hamburg arguably has both a larger audience to draw from and a more compelling claim to status as a center of musical culture.

Both Felix Mendelsohn and Johannes Brahms were born in Hamburg. Gustav Mahler was its opera director before he moved to Vienna to make his name.

Even the Beatles got their start in clubs on the Reeperbahn in the city's mammoth red light district. “I might have been born in Liverpool,” John Lennon once said, “but I grew up in Hamburg.”

“No other German city has such a large tradition and history,” Mischke says.

If all goes well, the Elbe Philharmonic Hall could be the next chapter.