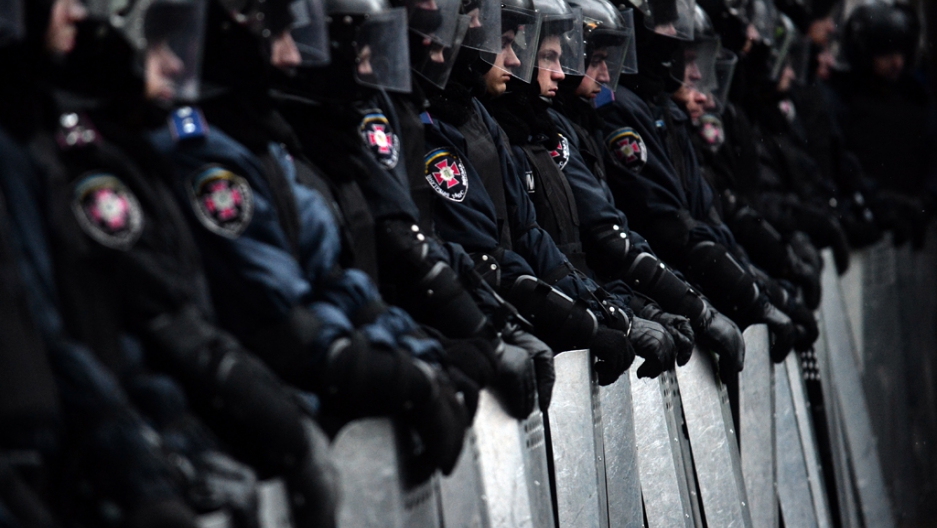 Riot police stand guard in front of Ukrainian parliament after a mass rally called "The March of a Million" gathered on Kiev's Independence Square on December 8, 2013.
Credit: AFP
Share

Ukrainian President Viktor Yanukovych supported a call for talks with the opposition Monday, even as police moved against protesters in Kyiv.

Former President Leonid Kravchuk proposed an "all-national round-table," which would include the opposition. Yanukovych's website said he "has supported this initiative. In his opinion, such a round-table can become a platform for mutual understanding."

The news came as several media reports said police were gathering in central Kyiv. Police dressed in riot gear, including helmets and shields, assembled around Kyiv's city hall as a court-ordered deadline for protesters to leave approached.

US Vice President Joe Biden called Yanukovych on Monday to express "deep concern about the situation in Ukraine and the growing potential for violence."

"The Vice President underscored the need to immediately de-escalate the situation and begin a dialogue with opposition leaders on developing a consensus way forward for Ukraine.

"He noted that violence has no place in a democratic society and is incompatible with our strategic relationship," the White House said in a statement.

A spokesman for the opposition Fatherland Party said its headquarters was raided by police. Ostap Semerak told the Associated Press police were walking in the hallways of the headquarters and climbing in the windows, describing the situation as "insane."

Three main subway stations were shut down on Monday, while protesters dug in, reinforcing barricades. The New York Times reported some demonstrators appearing to evacuate the city hall, expecting it to be an early target.

While the police removed barricades and cleared encampments near Kyiv's city hall, no clashes were reported.

US Vice President Joe Biden talked with Yanukovych, emphasizing the need to "immediately de-escalate the situation and begin a dialogue with opposition leaders," the White House said in a statement Monday afternoon.

Biden told Yanukovych that "violence has no place in a democratic society," and reaffirmed the United States' support of Ukraine's aspirations toward the European Union.

Independence Square, which saw the symbolic toppling of a statue of Lenin on Sunday, was also filled with crowds.

The demonstrations have spawned an array of trademarks: the moniker “YevroMaidan” (EuroSquare), lapel ribbons that blend the Ukrainian and European flags, and chants — such as “Away with the gang!” — which are shouted rapturously on the streets and in the subway.

But after nationalist protesters dragged the marble statue down with a steel cable and bashed it to bits with sledgehammers on Sunday night, the uprising may have finally acquired its most vivid image.

Elated crowds rallied around the bare mantle, erupting into renditions of Ukraine’s national anthem. Passing cars feverishly honked in support. Protesters called their friends and loved ones with the momentous news.

“Hi Mom,” said one. “Tell grandma that Lenin has fallen.”

Vitali Klitschko, a leading opposition figure, warned Yanukovych that he would have blood on his hands if the police attacked protesters.

PHOTO: Vitali @Klitschko warms his hands with fire at a barricade set by pro-European protesters in Kiev, Ukraine pic.twitter.com/LxELxyRGal

And this is his brother, Wladimir:

We hope this guys r wise enough not to start the fight against demonstrants. Getting "hot"in here. #ukraine pic.twitter.com/ZH2APojOLz

The protests in Ukraine began when Yanukovych moved away from a deal with the European Union. On Friday, Yanukovych met with Russian President Vladimir Putin, raising suspicion among the opposition that Ukraine's president might move towards a customs union headed by Moscow instead.

"I asked him to show restraint in the face of these recent developments, to not use force against the people that are demonstrating peacefully, to respect fully the freedoms that are so important for all of us in Europe," Barroso said.

More from GlobalPost: What next for Ukraine’s ‘revolution?’