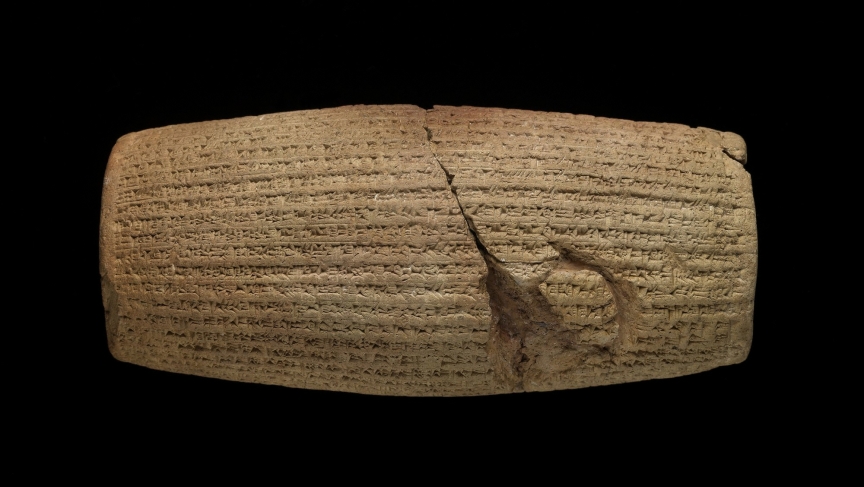 The Cyrus Cylinder dates back to 539 BC, when the Persian king Cyrus the Great conquered Babylon. It's said to be the first human rights charter. Iranian expats flocked to see this clay cylinder during its exhibition at the Getty Villa in California.

The Trustees of the British Museum

The Cyrus Cylinder may be small — only about 9 inches by 4 inches, but it is thought to be the world's first, written, human rights charter, inscribed 2,600 years ago in the Persian Empire.

The Persian king Cyrus the Great wrote the charter in 539 BC, after the conquest of Babylon. In it, he gave his subjects religious freedom and allowed exiled groups to return to their homelands. Since its discovery more than 100 years ago, the clay cylinder has become an iconic artifact for Iranians.

Now it is just completing its first tour in the US. Los Angeles has the largest population of Iranians outside of Iran, so it’s only fitting that the Cylinder made its final stop in LA. Throngs of Iranian expats and their children lined up to see it at the Getty Villa during its exhibition there.

As soon as I walked into the exhibit, I saw Zohreh Sadrzadeh wiping away tears. "I burst into tears," she said. "I got so excited, and something inside me just reacted. I don’t know, maybe it’s Iranian blood."

She stood in front of the Cylinder with her college-aged daughter Roxanne Radpour. Radpour is among the first in the family to grow up in the US.

She told me, "All of a sudden I turn around and I see [my mother] has got tears streaming down her face and she’s staring at it and was overwhelmed. And I saw another daughter with her mom and she had the same reaction. It was very overwhelming for her."

"It’s a good reminder of how much influence Persia had on the world," she said. "There’s a lot of awe and respect for it. It’s a big deal to see something that’s part of my heritage that I don’t get to see very often."

Her mother says the Cylinder means even more to her because of the political situation in her country. "Cyrus is the father of Iran," she explained, "and the fact that he wrote this declaration of human rights, and the fact that Iranians at this time don’t have basic human rights in Iran, maybe that’s another reason I couldn’t control myself. I started crying."

Ali Hajimiri also brought his children to see the Cylinder. He left Iran at 22 and now teaches engineering at CalTech. He talked proudly about Cyrus the Great’s legacy.

"The conquerors used to completely take over everything and subjugate the people around them," he pointed out. "When Cyrus came to power, considering how vast the empire became — the Persian empire at the time — I think he realized that model is not going to work. Arguably, it was one of the first true empires, in the sense that he gave the local people the ability to have self-governance, to some extent."

Bahman Fathi, a 60-year-old expat who moved to LA in 1977, said he’s thrilled to see the cylinder. He hopes cultural exchanges like this exhibit can help change Americans’ negative views about Iran.

"This tour has been successful, in a way, to introducing Iranians as peace-loving people, like many other people around the world," he said. Clearly the Cylinder's tour has brought joy and national pride to many Iranians.

Some of the expats here would like to see the Cyrus Cylinder go on exhibit in Iran again, so that more people there could see this vital part of their history. After this weekend, it is scheduled to head to Mumbai, India before returning to the UK, where it’s a part of the British Museum’s permanent collection.

Editor's note: This post was updated to add more information.