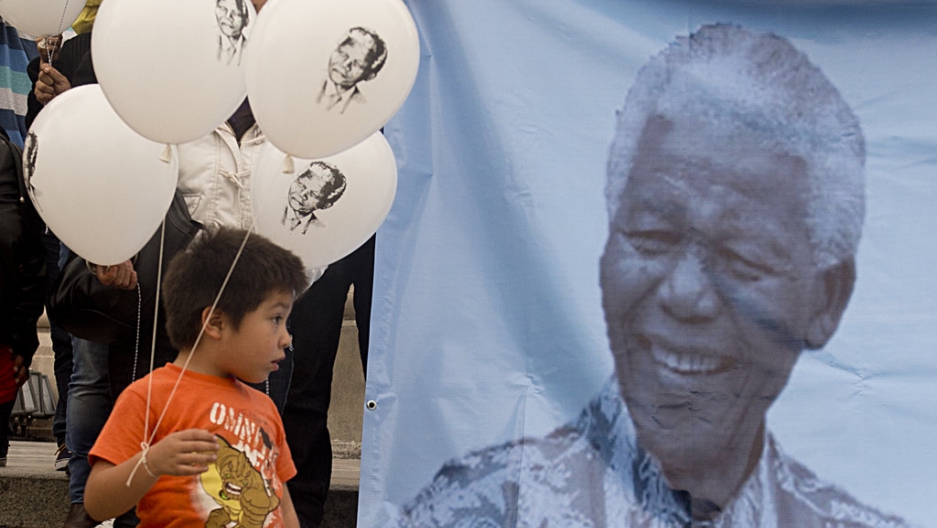 A boy accompanying his mother, member of the Conscience and Dignity Foundation, holds balloons with an image of former South African President Nelson Mandela during an event to mark Nelson Mandela International Day at Independence Angel square in Mexico City on July 18, 2013.
Credit: Yuri Cortez
Share

The widely adored South African leader Nelson Mandela, anti-apartheid icon and former president of the 'Rainbow Nation,' died Thursday at the age of 95, leaving behind a rich legacy promoting equality and human rights worldwide. A lesser-known part of his legacy is his founding of an international group known as The Elders.

Several years ago Peter Gabriel of the rock group Genesis and entrepreneur Richard Branson approached Mandela with an idea. That idea swiftly grew into a conversation.

The notion was simple: “many communities look to their elders for guidance, or to help resolve disputes. In an increasingly interdependent world—a ‘global village’—could a small, dedicated group of individuals use their collective experience and influence to help tackle some of the most pressing problems facing the world today?”

The Elders were formally established in Johannesburg in July of 2007.

The assembly is made up of 12 former heads of state, Nobel Peace Laureates, activists and freedom fighters that include Jimmy Carter, former US president; Ela Bhatt, the “gentle revolutionary” and Desmond Tutu, Archbishop Emeritus of Cape Town. The group is chaired by former UN Secretary-General Kofi Annan.

“Using their collective experience, their moral courage, and their ability to rise above the parochial concerns of nation, race and creed,” Mandela said of the group. “They can help make our planet a more peaceful, healthy and equitable place to live. Let us call them ‘global elders.’ Not because of their age, but because of their individual and collective wisdom.”

The Elders stand for independent voice, humanity and universal human rights, listening and acting boldly, according to their website.

“We are human only through the humanity of other human beings,” Mandela once told a crowded room. The statement is a South African Ubuntu philosophy—the word translating to “human kindness.”

In the last eight years of operation, The Elders have applied that human kindness to the Arab Spring, “reconciliation and healing” in the Côte d’Ivoire, equality for women and the strengthening of developing countries.

They are able to do so because they belong to no one entity exclusively.

“This group derives its strength not from political, economic, or military power but from the independence and integrity of those who are here,” Mandela explained. “They do not have careers to build, elections to win, constituencies to build. They can speak to anyone they please and are free to follow paths they deem right, even if hugely unpopular.”

Their Facebook page is evidence of international acclaim. One woman from British Columbia praised the group for their work on women’s rights in the Democratic Republic of Congo with a comment that read: “Thank you, Elders. Thank you for all you do!”

Similar messages of thanks can be traced back to London, Germany, India and Iceland, among other countries and regions—troubled or not.

“Congratulations to the Elders who are doing wonders to promote and sustain universal human values in the world,” wrote a woman in Oman.

With its founder now gone, the Elders will carry on in the spirit of Mandela, who said, "This group can speak freely and boldly, working both publicly and behind the scenes. Together they will support courage where there is fear, foster agreement where there is conflict and inspire hope where there is despair."