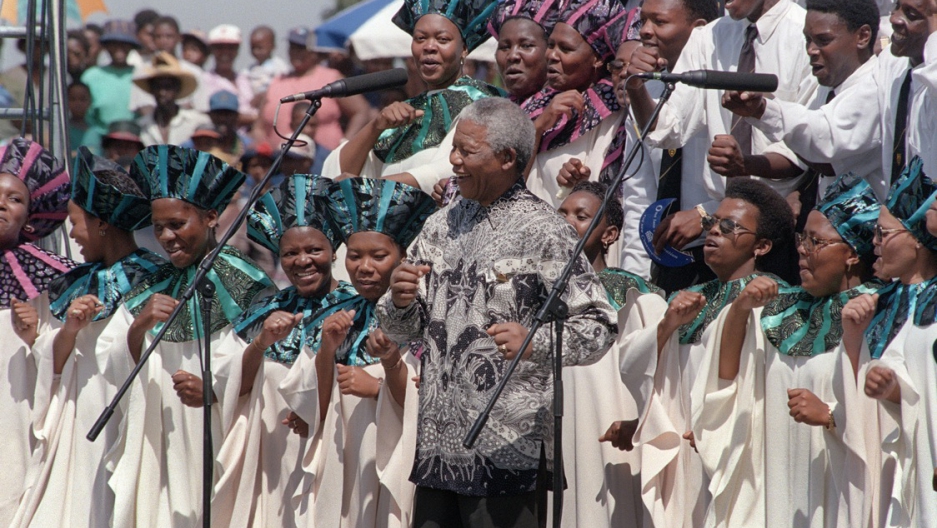 President Mandela celebrates the signing of South Africa's new constitution, on Dec. 10, 1996, in Sharpville stadium. The constitution is considered one of the most progressive in the world.
Credit: WALTER DHLADHLA
Share

Though he has passed away, Nelson Mandela's legacy as one of the world's most influential civil rights leaders will live on in many ways. Films, biographies, multimedia exhibits and even video games, for instance, all attest to the lasting impact Mandela has had on both South Africa and the world at large.

Music and social activism have always been a potent combination, so it's no surprise that Mandela is the subject of countless musical tributes. The songs span genres, from jazz fusion to opera to synth pop. He became an international icon during his decades-long imprisonment for fighting apartheid in South Africa, prompting scores of musicians to celebrate his determination in the face of deeply entrenched prejudice.

Perhaps the most involved tribute is the Mandela Trilogy, a 2010 South African opera that covers Mandela's life in three parts, focusing on his childhood in rural Transkei, his rise in South Africa's political activist scene, and finally his imprisonment and eventual release. Each section features music from a different composer, reflecting the cultural and political shifts that occurred during Mandela's life. Traditional Xhosa vocal music, re-arranged jazz standards, and opera librettos all combine in this spectacular tribute to South Africa's most revered leader.

Fusion-rocker Carlos Santana and jazz giant Wayne Shorter, meanwhile, collaborated on the propulsive instrumental piece "Mandela," a song that mixes Latin, African, Middle Eastern, and jazz idioms to reflect the universal importance of the civil rights leader's fight for social equality. Santana dedicates the peace to a "true freedom fighter who reminds us that we are not free until all our brothers and sisters are free."

Hugh Masekela's "Mandela (Bring Him Back Home)" is another popular tribute from a South African musician. Masekela's eclectic blend of jazz, synth pop and African choral traditions draws on the cultural diversity of Africa to honor the continent's most influential voice for freedom.

Not all tributes to Mandela are good, of course. Nickelback's schlock-fest "If Everyone Cared" vaguely pays tribute to Mandela and other activists, like Bob Geldoff and Betty Williams, though the lyrics fail to mention any of them. The video for the song features archival footage of Mandela, perhaps compensating for his absence in the song itself. At least the proceeds from the hit single went to human rights organization Amnesty International.

Britain's ska-rock group The Specials recorded one of the catchiest tributes to the former South African president with their 1984 single "Free Nelson Mandela." The band's punchy horn arrangements and jubilant backup vocals make for one of the most upbeat celebrations of Mandela's accomplishments.