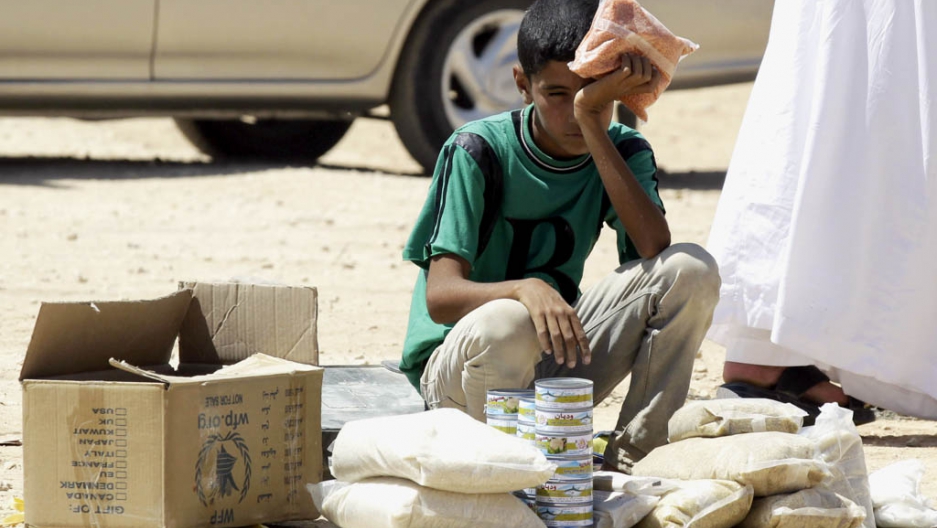 A young Syrian refugee boy sells canned tuna and other food items in the Zaatari refugee camp, located close to the Jordanian city of Mafraq, near the border with Syria, on September 4, 2013.
Credit: KHALIL MAZRAAWI
Share

ZA’ATARI REFUGEE CAMP, Jordan — The conflict in Syria is only eight miles away from the residents of Za’atari, the second largest refugee camp in the world. They can sometimes hear the explosions, according to one humanitarian aid worker, who noted that the proximity to the border and the conflict adds to the insecurity in the camp.

“Za’atari is the tip of the iceberg of the Syrian crisis,” said Kilian Kleinschmidt, the camp manager.

Za’atari is laid out on a stark five square miles of barren rocky desert with tents and caravans as far as the eye can see. There is not a single tree or bush or plant anywhere, nothing to break the view except coiled barbed wire around certain parts of the compounds. Conditions have improved considerably, according to those who have visited the camp in the past; however the landscape and the challenges remain daunting.

Originally set up for 10,000 people, Za’atari currently houses over 80,000 and at times has held as many as 150,000. The camp is now the fourth largest “city” in Jordan, one of the places I recently worked on a field mission for Refugees International to meet with Syrian refugees.

“We walked three days in the dark, at night, afraid, carrying our two children,” said one young man, who travelled with his wife and three-year old son and one-year old daughter, trying to avoid the fighting. They finally got a ride and arrived at Za’atari, but he was concerned he wouldn’t be able to support his family.

The displacement of people from the three-year old civil war in Syria has caused the worst refugee crisis since Rwanda, according to officials at the United Nations High Commission on Refugees (UNHCR).

They estimate that at least two million people have fled across Syria’s borders and millions more are internally displaced. Hundreds of thousands are living in tents and caravans and many in even more problematic structures in fields and behind houses across the border from Syria. Men, women and children--often on foot or in buses and taxis--have fled into Iraq, Jordan, Lebanon, Turkey and countries further away.

Adding to the challenge of assisting these people are the recent and growing restrictions on crossing from Syria into Iraq and Jordan, restrictions which some complain are tantamount to closing the borders.

In Jordan, a country of six million people, the UNHCR believes that there are nearly 600,000 refugees, and some estimate the figure to be over a million. In both Iraq and Jordan, only a third of these refugees are in camps; the rest are dispersed throughout cities and towns, often unregistered and without services.

At Za’atari, the camp was preparing for winter. Ninety thousand thermal blankets had just arrived, and winterization packages were being assembled which would also include plastic sheeting, kerosene and heaters. A few days before, 20,000 ration cards had been deactivated in an attempt to get an accurate registration roster, in part triggering a large protest, which included some of those whose ration cards no longer worked.

Since Kleinschmidt, the current camp manager, arrived in March, the violence in the camp has decreased, but there is still considerable resistance to authority.

“The challenge is for the people to respect some authority so when the refugees return, they can rebuild and govern Syria," Kleinschmidt said. "If people return with the state of mind now, it is going to be difficult.”

In the past months Za’atari has been divided into 12 districts. The UNHCR camp manager is planning for everyone to be registered with an address so each refugee can be located. Another goal is to replace tents with metal caravans, which offer more protection from the elements.

“People want to be able to stand upright in their homes and be able to lock their door at night,” he said. But the caravans promised by international donors are no longer arriving in the numbers needed.

Education for the children is also a significant challenge in Za’atari and at other refugee camps, as well as among those living out in the Jordanian communities. In Za’atari, an estimated 13,000 children attend school out of 18,000 enrolled and an estimated 55,000 youth in total. Outside the camps parents often face fees and expenses for schools. One parent living in a community outside the camp said he wanted to send his children to school, but he didn’t have the funds, and he was not allowed to work to earn the money. In Syria he had been a school principal.

As the year ends, the region is facing increasing needs and another shortfall of funds, according to Daryl Grisgraber, senior advocate for Refugees International. (Running Za’atari is said to cost roughly $500,000/day.) But there is also some progress with more countries willing to take in Syrian refugees on humanitarian grounds.

Despite the harsh conditions in Za’atari, there are signs of hope. Myriad small enterprises—30 restaurants, a supermarket, even a new coffee shop—have sprung up. Running through the middle of the acres of desert is a dusty path with stalls on either side where residents sell vegetables, clothes, shoes and other wares. The residents have dubbed it the Champs Élysées. There are many more births (10 per day) than deaths (5 per week). And a new camp nearby has been set up and will soon take the overflow from Za’atari.

Joanne Leedom-Ackerman, novelist and former reporter for The Christian Science Monitor, is a member of the board of directors of Refugees International and recently returned from a visit to Iraq and Jordan.