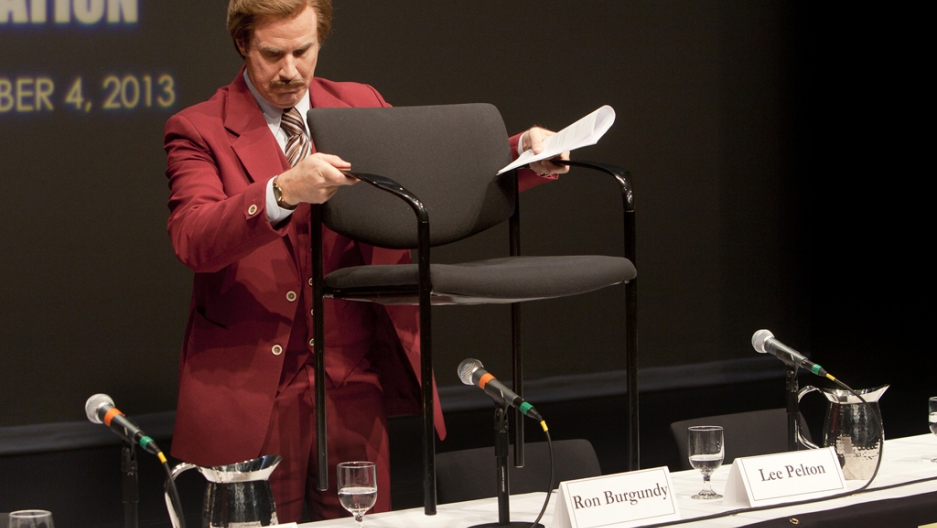 BOSTON — Some days drip with historic and journalistic import.

There's Neil Armstrong on the moon.

And then there was today — Dec. 4, 2013 — otherwise known as Ron Burgundy Day at Emerson College.

As future historians will duly record, on this date the Boston institution named its communications school The Ron Burgundy School of Communication.

"For one day, and not a minute longer," Emerson President M. Lee Pelton joked to a packed theater of journalism students and some 90 professional journalists.

And, yes, Ron Burgundy was there. Or at least, "Anchorman" (and "Anchorman 2") star Will Ferrell was there.

Ferrell never broke character throughout the event, which included a brief naming ceremony and then about an hour of Q-and-A with the audience.

His character was full of advice for Emerson's future journalists.

"Always get the facts, unless it's too hard."

"Get in the habit of speaking in lower octaves," he told one aspiring broadcaster. "I gargle with day-old bathwater. That's what gives me these dulcet tones."

He also urged male and female journalists to wear more cologne and perfume, while lamenting the lack of facial hair in journalism today.

And he offered this bit of wisdom for those out in the field:

"Always keep a $20 bill in your shoe in case you end up in a Peruvian jail," Burgundy said.

More from GlobalPost: 19 reasons you should probably move to Lima, Peru

He also noted that Boston was "founded by the Japanese in the early 1600s," and that in Japanese the city's name translates to "flight of the sparrow."

Funny stuff for sure, and the audience loved it.

There was naturally some hand-wringing about a "serious" journalism school handing over its brand to a fictional journalist — even for a brief PR stunt.

But most of the audience laughed that off, before quickly tweeting about the event and sharing jokes across other social media platforms.

And that was precisely the point.

By teaming with Ron Burgundy, Emerson showed that it's a bit hipper than your average journalism school.

Puffed up and preening journalists are easy to skewer, especially in the hands of someone as smart as Ferrell.

That included one local TV diva who tried to hijack today's event by brashly approaching Burgundy on stage, begging him for an autograph while simultaneously asking advice on how to be a better journalist.

"Wear a shorter skirt," he answered.

By playing along with the joke, Emerson can float more easily above the digs that journalists are out of touch, and get down to actually teaching students how to practice the craft in the digital age.

"The buzz surrounding the event for the past few weeks made for a terrific learning opportunity," Emerson College Journalist-in-Residence Cindy Rodriguez said.

"Ron Burgundy's satirical character gives us loads of examples of what NOT to do as a journalist. He's a composite character much like Archie Bunker: racist, sexist, rude, self-involved. My students and I have talked about his character and the reality of what newsrooms were like in the '70s and '80s. Sadly, there are real Ron Burgundys in the news media who actually anchor the news for stations that have dumbed down the news," she added.