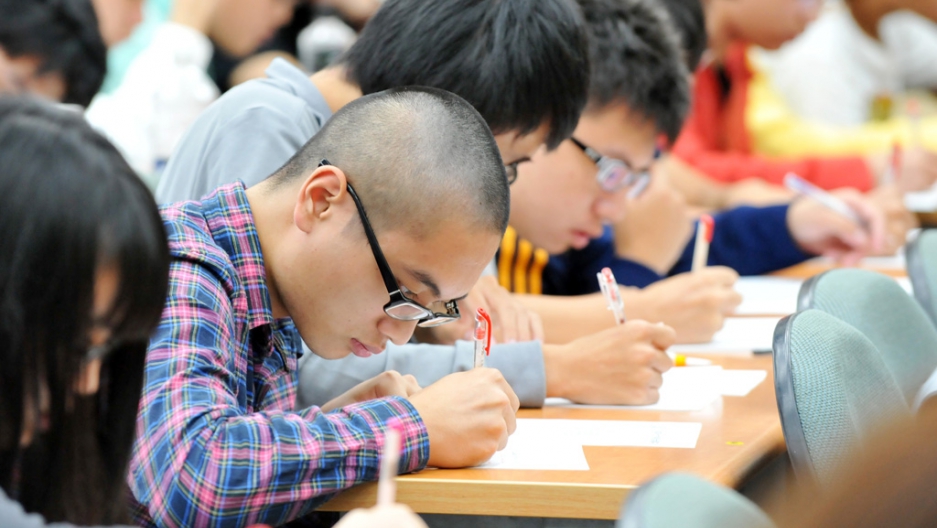 High school students study in Taipei in this 2012 file photo. According to the Organization for Economic Cooperation and Development (OECD), students from Asia are vastly superior to their counterparts from Europe and North America when it comes to math, reading and science, the group said on Dec. 3, 2013.
Credit: AFP
Share

Two things we know thanks to the Organization for Economic Cooperation and Development: first, students from Shanghai and Singapore are adding to their advantages when it comes to math.

Second, Helen can really rip on the back of her new bicycle.

After testing more than a half-million 15-year-old boys and girls from 65 regions, the OECD released findings on Tuesday from its Program for International Student Assessment (PISA).

The OECD (a collection of the world’s richest nations headquartered in Paris) has found Asian countries dominate math, girls are better readers and student-teacher “relations” among all but one OECD nation improved from 2003.

“With high levels of youth unemployment, rising inequality and a pressing need to boost growth in many countries, it’s more urgent than ever that young people learn the skills they need to succeed,” OECD Secretary-General Angel Gurría said during the launch in Washington, DC.

“In a global economy, competitiveness and future job prospects will depend on what people can do with what they know. Young people are the future, so every country must do everything it can to improve its education system and the prospects of future generations.”

Every three years since 2000, students from randomly selected schools worldwide take tests in reading, mathematics and science. The two-hour tests are a mixture of open-ended and multiple-choice questions based on real-life situations, the OECD says.

Overall, Asian countries are outpacing their peers in all three subjects.

Students in Shanghai, for example, are nearly three years ahead of most OECD countries, the study says. Hong Kong, Chinese Taipei, Korea, Macao, Japan, Liechtenstein, Switzerland and the Netherlands round out the top 10.

Here’s an example of a math question given to students:

Andreas Schleicher, the OECD deputy director of education, told CNN Asian students realize they are responsible for their futures.

“In China and Shanghai, you have nine out of 10 students telling you, ‘It depends on me. If I invest the effort, my teachers are going to help me to be successful,’” he said.

The United Kingdom is so concerned with its foundering results that it will introduce “elite maths” schools, the Telegraph reported.

UK schoolchildren are about three years behind their Asian counterparts, the OECD says; however, better teachers will do little to improve their performance, one critic told the Telegraph.

“While high-level teacher skills are essential for maximizing student performance, at a national level, these cannot have any impact without a culture of hard work, a drive to succeed educationally, backed up strong support outside school,” Durham University education professor Joe Elliott told the newspaper.

While some suggest the United States can say many students come from different cultures, and Asian students are only those from elite families, Marc Tucker is tired of the apologies.

As National Center on Education and the Economy president, Tucker said Americans should look at improved countries such as Ireland and Poland. Vietnam, one of the weakest economies among OECD nations, was tested for the first time in 2012 and scored better than the US.

“Americans have got a thousand reasons that one country after another is surpassing our achievement, and I have yet to find a good excuse,” Tucker told the Associated Press.

PS: The answer above is B.