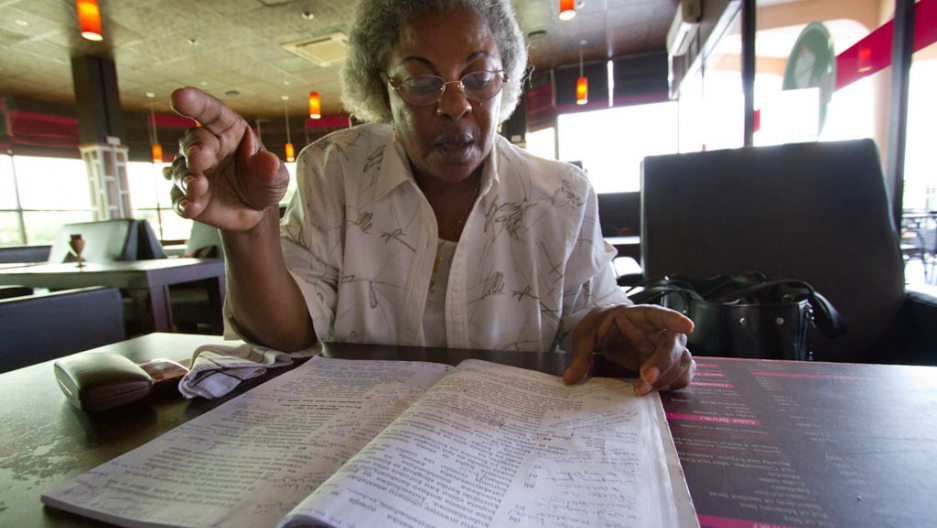 Maria Kashonda pages through her copy of the proposed constitution she helped draft as a member of the Constitutional Review Commission. She says People are putting aside their religious differences to fight for guarantees of rights like education and health, which she says are universal.
Credit: Jacob Kushner
Share

ZANZIBAR, Tanzania – Political divisions in this East African nation are so profound that to achieve some sort of unity may, paradoxically, require dividing the country even further—into as many as three governments within a single state.

That’s the proposal put forth by a group of politicians drafting a new constitution intended to usher in prosperity for all Tanzania’s people, urban and rural, rich and poor. That task appears even more daunting given that Tanzanians are further divided by religion, split between Christians and Muslims and those who are animist or practice local religions.

And yet the one thing nearly everyone in Tanzania agrees on is that religion should have little or nothing to do with the constitutional process.

“Wherever you are, you want good education, health services—these things are universal,” said Maria Kashonda, member of the Constitutional Review Commission. “People are putting aside their religious differences for these.”

That fact makes Tanzania a fascinating anomaly in the context of the many deeply religious conflicts that plague today’s world from Myanmar to Egypt to Nigeria, where Muslim-Christian violence has killed more than 5,000 people since 2009. In neighboring Kenya, young Muslims last month set fire to a church in reaction to what they believe was a police-sanctioned killing of a popular Muslim cleric.

In Tanzania, the proposed constitution broadly guarantees “freedom of worship” and states that “the government has no religion or religious affiliation.”

These are the only mentions of religion in the entire 130-page, 240-article document.

To say that religion has become a non-issue here would seem a bold statement indeed: After all, Tanzania made headlines in September for an acid attack committed by what are presumed to be Islamic extremists that left a Catholic priest hospitalized, his face and body disfigured. That attack occurred in Zanzibar, an island of 1.3 million that is 99 percent Muslim. One month earlier, two British women suffered a similar attack there.

But few Tanzanians believe these incidents indicate that a broader, Islamic fundamentalist movement is fomenting here. In fact, many see the attacks as acts of desperation by a declining cohort of Islamic hardliners in a place that has become decidedly less religiously fervent in recent years.

“During the month of Ramadan, in the old days, you were not allowed to eat, drink, smoke or anything in public, even if you were Christian,” said Abul Bakari Ali Mohamed, a Zanzibar native and a moderate member of the committee drafting Tanzania’s new constitution. “But now there are some residents you might find cooking during the day in Ramadan. Things have somehow relaxed.”

Like most mainstream political leaders here, Mohamed says the current disagreements aren’t religious. Rather, “it’s an economic sort of tug of war.”

New discoveries of natural gas off the Tanzanian coast led Tanzania’s Ministry of Energy and Minerals to predict in August the country’s known gas reserves may quintuple this year. Natural gas could become a major revenue earner in Tanzania when it begins exporting to Asian markets in coming years.

But combined with discoveries of petroleum near Zanzibar and uranium on the mainland, the findings are causing disagreements over how the proposed constitution should split Tanzania’s natural resource wealth. Small landowners want a guarantee that they’ll be fairly compensated for land appropriated by mining companies, and they don’t want any land concession to last longer than 10, 15 years at most. Many demand the right to become shareholders in any mining venture on their land.

These are demands that, if granted, would make it more difficult for Tanzania’s ruling party to attract foreign investment to its mining sector. What’s more, the draft constitution would give the Zanzibar government and the mainland government the right to tax and profit almost exclusively from their own respective resources. Zanzibar would thus control what could be billions of dollars worth of oil buried just offshore—assets mainland Tanzanians may have a difficult time letting go of.

Indeed, Zanzibaris have high hopes for the new constitution and the economic possibilities it may offer. On a quiet Saturday afternoon, a relatively hardline Muslim cleric sits upon a bed of dirt and leaves on his family farm and calmly explains how Zanzibar needs offshore banking investment and a free trade zone for its port—things which Tanzania’s current, Union government has refused them.

It’s one of the many reasons why Zanzibar business leaders want more control over their island’s lucrative tourism and spice production. An autonomous Zanzibar could qualify for low-interest loans offered by the Organization of Islamic Cooperation. “We could join FIFA,” exclaimed one Zanzibari businessman.

Most Zanzibaris believe more autonomy will allow them to generate more revenue and create jobs to ebb the nation’s growing youth unemployment crisis.

“The youth, they have no opportunity. They loose hope entirely,” said Ahmed Seif, 39, an IT consultant who conducts programming among the island’s youth. He said many young people are finding a home for their grievances within a movement that is pushing for Zanzibar to become an independent state altogether.

Hundreds of young people took to the streets of Stonetown, Zanzibar’s historic city, last year in what began as a protest against the disappearance of a leader of the separatist and staunchly Islamic group Uamsho (Awakening). Police fired tear gas and arrested several Uamsho members on charges of inciting violence.

Some in Tanzania pointed to these protests as evidence that an independent Zanzibar could become a haven for radical Islamists. But the majority here seems to see the protests more as a reflection of general discontent by Zanzibar’s youth than as an endorsement that Zanzibar should be ruled by Islam.

“Because of the nature of the activities that they were doing—open rallies every weekend—it led many people to believe that what was happening in Zanzibar was connected to (Uamsho),” said Ismail Jussa, leader of the separatist-leaning CUF party in Zanzibar. “People thought this was a religious movement. But it was not. “

For now though, Zanzibar’s independence remains out of the question. Most people in both Zanzibar and the mainland—where the vast majority of Tanzania’s 44 million people reside—seem willing to accept that the country’s future will require some sort of unity, even if it’s a complicated one. Tanzanians are voicing that opinion through more than 140 public hearings held in communities across the country on the new proposed constitution.

These public discussions allow Tanzanians to air their religious and economic grievances in the realm of politics and dialog rather than through violence as occurs elsewhere in the world. But they also create a problem: the direct involvement of a wide array of everyday Tanzanians makes the constitutional process so complex it might doom the endeavor altogether.

As Tanzania’s National Assembly begins discussing the constitutional draft next month, members will be hard pressed to reach a compromise agreeable enough to win the necessary votes: The final bill must appease two-thirds of the members of the Unity government’s National Assembly as well as two-thirds of the Zanzibar House of Representatives. Then, at least 50 percent of voters in both the mainland and in Zanzibar must ratify it through public referendum.

The battle over Tanzania’s future may be more economic than it is religious, but it is a deeply contentious one nonetheless.