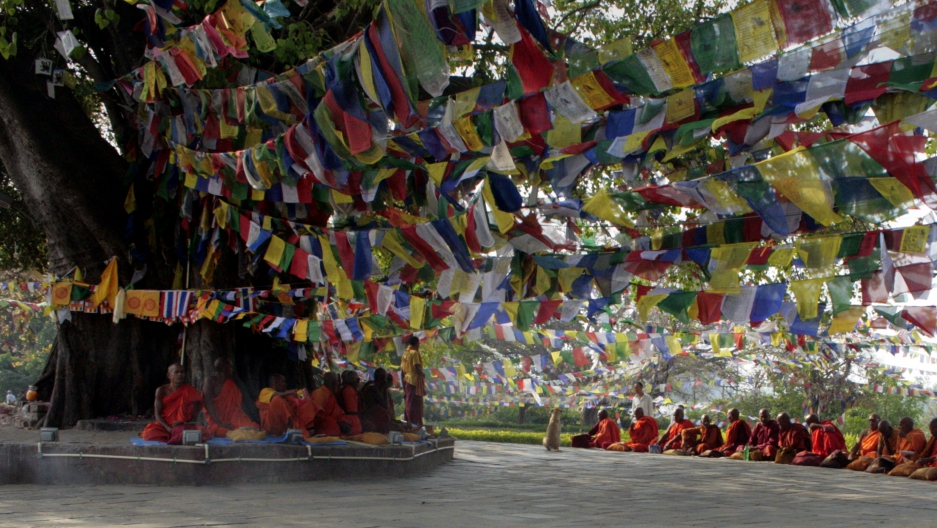 Monks chant as they sit under the Bodhi tree adjacent to the Maya Devi Temple in Lumbini some 200kms west of Kathmandu on April 17, 2013. The temple is dedicated to Buddha's mother and is one of the four most sacred places in Buddhism, as it is the site of his birth.
Credit: Kyle Knight/AFP
Share

Buddhism is one of the planet's most popular religions, with estimates ranging from 350 to 550 million followers worldwide.

Like many other religions, Buddhism has a strong culture of pilgrimage, with the four most important sites located in southern Nepal and on the Gangetic plains of Northern India — where the Gautama Buddha is believed to have lived and taught.

These sites include Lumbini, the Gautama Buddha's birthplace in southern Nepal, which received renewed attention in November 2013 after scientists investigated ancient ruins beneath the current pilgrimage site.

More from GlobalPost: China vs. India: The battle for Buddha

Sarnath, the deer park where the Gautama Buddha was said to have first taught the Dharma is another major Buddhist site, located near the Hindu holy city of Varanasi in Uttar Pradesh, India.

Third is Bodhi Gaya, where the Buddha is said to have attained enlightenment under the iconic Bodhi tree. The modern pilgrimage site is at the Mahabodhi Temple Complex in India's Bihar state — a popular destination for devotees from around the world.

The final major site is Kusinara (now referred to as Kushinagar), where the Buddha is said to have died and reached Parinirvana, or total enlightenment.

These four major sites are by no means the only important sites of Buddhist pilgrimage in the modern world, however. Here's a photographic sampling of other hot spots.