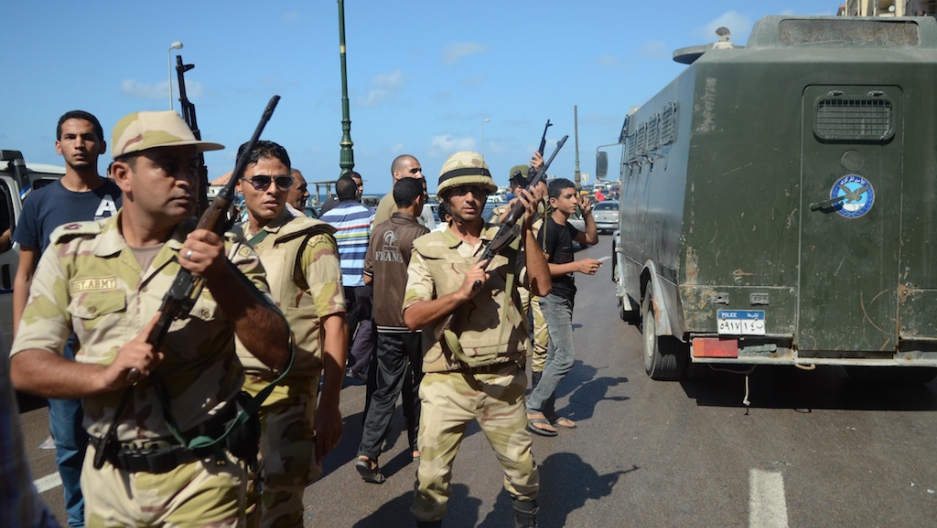 Egyptian security forces take position during a Sept. 20, 2013 demonstration in the northern coastal city of Alexandria. Protesters rallied in support of Egypt's ousted Islamist president Mohamed Morsi and against the military.
Credit: -
Share

Here’s how it went: the US government would collect taxes from the American people. It would give a portion of the proceeds — about $1.3 billion a year — to help Egypt’s military. Egypt’s military would then give that money back to the United States, or at least to the country’s major defense corporations, in return for goods and services.

This special relationship was necessary, the US government said, to maintain stability in the Middle East.

Well, stability in the Middle East is hard to come by these days, as is a justification for giving the military leaders of Egypt — one of the least stable countries on the planet right now — so many resources. So the White House, somewhat tentatively, announced Oct. 9 that the two countries could no longer continue their “business as usual.” (Other business with Washington, however, appears to be flourishing.)

While the change may be largely symbolic, before Oct. 9 — no matter how bad it got, no matter how much violence or no matter who was leading the government — US companies producing and providing Egypt’s tanks, helicopters, and bullets did not flinch. Business was business.

To illustrate just how unwavering the arrangement was, GlobalPost compiled key US contracts for military aid to Egypt, held by the American defense giants that profited the most from that aid. We mapped this sample within the context of significant political moments, from the 2011 revolution that toppled a dictator to the military ousting of the president who took his place.

Contract details cited here were compiled from the US Defense Department database, where contracts over $6.5 million are published each business day. Dollar amounts are rounded to the nearest tenth of a million.

More from GlobalPost: Here are the top 10 American companies profiting from Egypt's military

Birth of the Arab Spring

Dec. 17 – Mohamed Bouazizi lights himself on fire in Tunisia to protest social and political injustice. In response, mass demonstrations erupt across the Middle East in what would be later known as the Arab Spring.

Jan. 4 – The US Defense Department grants $6.8 million to Caterpillar, Inc. to provide heavy machinery, like bulldozers, to the government of Egypt — seemingly harmless construction equipment. But bulldozers including those built in the US by Caterpillar are later used by security forces to destroy barricades and violently disperse pro-Morsi protesters staging a mass sit-in at Rabaa Al-Adawiya mosque.

Data obtained by Al Jazeera will later show that Caterpillar heavy machinery continued to be shipped from the US to Egypt between July 3 and Sept. 24 2013, when security forces were staging an intense and bloody crackdown on the opposition. Caterpillar did not respond to a request for comment from GlobalPost.

Jan. 28 – The White House says it will review aid to Egypt based on the direction anti-Mubarak protests take in coming days.

Feb. 10 – In the midst of the Egyptian revolution — and just a day before Mubarak steps down — Swiftships Shipbuilders, LLC is awarded $20.2 million, modifying a previously awarded $13.4-million contract from 2008, to construct four 28-meter coastal patrol crafts for the Egyptian Navy, as well as to provide naval training.

But by 2013, strained US-Egyptian relations will push the order for the batch of patrol crafts to the back burner. “The Egyptian Navy has been a long enduring partner since the 1980s,” Swiftships Shipbuilders CEO Shehraze Shah tells GlobalPost in October 2013. “A team of four Americans, managed by a retired Egyptian admiral, has been serving the contract for almost a decade. But now we’ve been told we need to pull resources back. It’s hurt us because of the unrest. All of the production overseen by the US government has basically stopped,” Shah says.

Feb. 11 – After 18 days of massive protest, Hosni Mubarak steps down and hands power to the Supreme Council of the Armed Forces (SCAF).

March 9 – Egyptian police forces and armed men violently break up a sit-in at Tahrir Square. Protesters are interrogated, whipped, and electrocuted for hours in detention. Over a dozen female demonstrators are subjected to "virginity tests" while male soldiers take pictures of the stripped women. Many protesters, who had been demonstrating against remnants of Mubarak’s regime and his internal security apparatus, only receive brief military trials before being convicted and sent to military prisons. A Muslim woman supporting her Christian friend after her brother was killed during Maspero demonstrations. Lilian Wagdy/Wikimedia Commons

Oct. 9 – Some two dozen protesters are killed in clashes with military police after several thousand Coptic Christians, as well as Muslims, demand fair rights for religious minorities after a church is burned in southern Egypt. In what will come to be known as the Maspero Massacre, soldiers fire live rounds at protesters and drive armed personnel carriers into the crowd, crushing some to death.

Years earlier, the Egyptian government had justified expansion of its tank fleet on the grounds that “the Egyptian military has no history of human rights abuses and is under civilian control,” as detailed in an April 2008 document published by WikiLeaks.

At the time of the Dec. 30, 2011 contract, however, the country is under military control, and the SCAF is accused of widespread abuses. General Dynamics Ordnance and Tactical Systems did not respond to a request for comment from GlobalPost.

A democratic vote, a new president

June 24 – Mohamed Morsi is announced as the new president of Egypt, and the first to be democratically elected. But it's not long before he is accused of pushing an Islamist agenda and granting himself authoritarian powers. Since 1979, Egypt's F-16 fleet has swelled to over 200 fighter jets. FAYEZ NURELDINE/AFP/Getty Images

Aug. 24 – AICI/Archirodon is awarded a $66.6-million contract for the “design and construction of facility upgrades” for F-16 fighter jets. Egypt was the first Arab country to buy F-16s; since 1979, the country’s F-16 fleet has swelled to over 200 aircraft. They have long been viewed by both countries as a strong political symbol of US-Egyptian relations. Neither AICI nor Archirodon responded to requests for comment from GlobalPost.

Egyptian riot police stand behind their shields as the clash with protesters along a road which leads to the Interior Ministry. MAHMUD HAMS AFP/Getty Images

Egyptian protesters use makeshift shields to approach the Shura council building during clashes the army in Cairo on December 16, 2011. MOHAMED HOSSAM AFP/Getty Images

Dec. 3 – The Defense Department awards General Dynamics Land Systems a $37.6-million contract for the modification of an already existing contract to help Cairo’s military tank plant produce M1A1 Abrams tanks. Peter Keating, director of communications at General Dynamics Land Systems, told GlobalPost that the contract was intended to provide technical support and assistance to Egyptian workers. The American workers stationed in Egypt to carry out this contract will later be sent home following the State Department’s October 2013 announcement of a partial cut to US military aid, according to Keating.

An Egyptian protestor holds the widespread picture of a woman who was stripped and beaten by riot police during clashes on December 22, 2011. MOHAMMEDABED/AFP/Getty Images

A purge of "foreign hands"

June 4 – Amid allegations of “foreign hands” intervening in Egyptian affairs, a criminal court in Cairo convicts 43 NGO workers, including 19 Americans, of illegally receiving foreign funds to operate organizations. In response to the convictions, then-US Secretary of State Hillary Clinton threatens a cut in aid to Egypt.

June 30 – On the one-year anniversary of Morsi’s official inauguration, millions of Egyptians demonstrate across the country, demanding his resignation and the exit of a government accused of backing an Islamist agenda.

$8.1 million for a border surveillance system

July 2 – Just one day before Morsi’s ouster, DRS Radar Systems is granted an $8.1-million contract to provide a border surveillance system to Egypt. While the contract does not offer specifics, the surveillance is likely geared toward Egypt’s most volatile border area near the Gaza Strip and Israel, where the United States has invested millions of dollars in military aid.

Morsi is overthrown by the military

July 3 – Following mass protests against the Islamist president, Gen. Abdel Fatah al-Sisi announces Morsi’s removal from power, the appointment of Adly Mansour in his place, and the suspension of the controversial constitution.

July 24 – Following Morsi's ouster, the United States announces it will delay the delivery of four F-16 fighter jets produced by Lockheed Martin. A Pentagon spokesman tells reporters: "Given the current situation in Egypt, we do not believe it is appropriate to move forward at this time with the delivery of F-16s.” However, just three weeks later the US will grant a contract to extend the life of part of Egypt’s existing F-16 fleet.

Aug. 12 – General Electric Co. is granted a $13.7-million contract to provide 18 “life extension” kits to the Egyptian Air Force. The kits will make the engine lifespan of some of Egypt's existing F-16 fighter jets, made by Lockheed Martin, last decades longer. The contract is granted as the US government publicly withholds support for sending more fighter jets. General Electric Co. did not respond to a request for comment from GlobalPost.

Aug. 14 – Security forces violently clear a massive pro-Morsi sit-in at Cairo’s Rabaa al-Adawiya Mosque, in addition to a smaller protest at a tent city in Al-Nahda Square. Over 600 people die in clashes, the majority of whom are Morsi supporters. The incident is labeled a massacre by much of the international community.

Aug. 28 – Raytheon is granted a $9.9-million contract to develop border tunnel activity detection systems for Egypt. (Following Morsi’s ouster, the majority of the tunnels leading from Sinai into Gaza were destroyed by the Egyptian army.)

Soon, the military’s campaign to quell militancy in the peninsula will be met with fear and anger from Sinai civilians who say they are being targeted and killed by their own government. But no US aid bolstering counterterrorism efforts or border security has been cut to date. Raytheon did not respond to a request for comment from GlobalPost.

The US announces some cuts to Egypt's military aid

Oct. 9 – The US announces it will cut some aid to Egypt “pending credible progress toward an inclusive, democratically elected civilian government through free and fair elections,” according to the State Department. Officials say the cut includes 10 Apache helicopters costing around $500 million, M1A1 tank kits, F-16 fighter jets, and anti-ship missiles, as well as $260 million in cash assistance to the Egyptian government. No new contracts have been granted since Oct. 9, based on the Pentagon's public data.