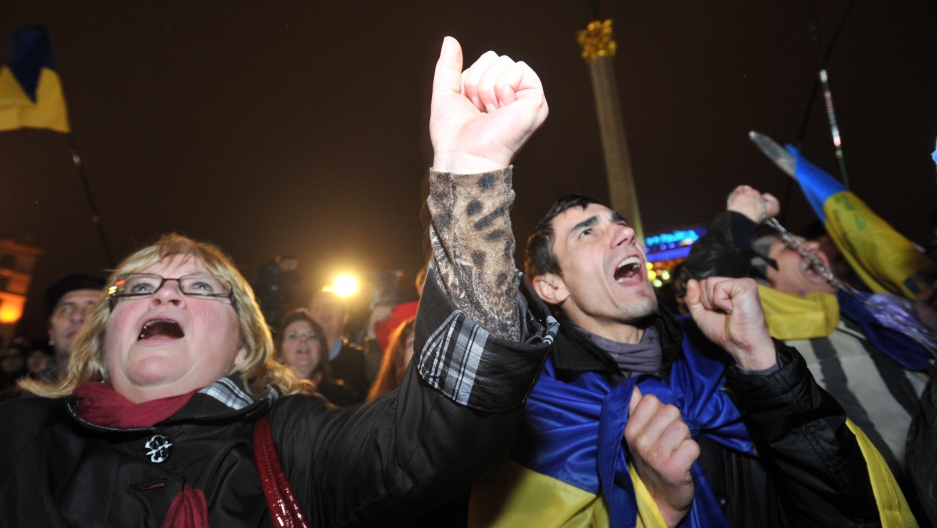 More than 100,000 people gathered in the Ukrainian capital of Kiev on Saturday to protest the government's move to delay an association agreement with the EU.

Opposition leaders have joined, and some say are leading, the demonstration, which is said to be the largest since 2004's Orange Revolution.

They are calling for President Viktor Yanukovych to sign the free trade and political association deal with the EU next Friday and say they will continue to demonstrate until he does.

Protesters were met with tear gas and batons as they clashed with police while attempting to storm government buildings and throwing stones at officers, according to reports.

People arrived at the rally in European Square holding banners with slogans like "I want to live in Europe" and "Ukraine is part of Europe."

"We want to be together with Europe," said Volodymyr Mnikh, a 62-year-old retired chemist, to the Associated Press.

"We want our children to have a future and not to be pressured by Russia."

A pro-government rally a few miles away brought out about 10,000 people, according to the BBC.

Ukraine announced suddenly last week that it would pull out of the EU agreement because it could not afford to break trade ties with Russia.

Russia has been aggressive in its attempt to derail the EU deal in order to bring Ukraine into the Moscow-dominated Customs Union.

Russian President Vladimir Putin accused the European Union of blackmailing Ukraine so that the country would sign its deal during an EU summit in Vilnius, Lithuania, next week.