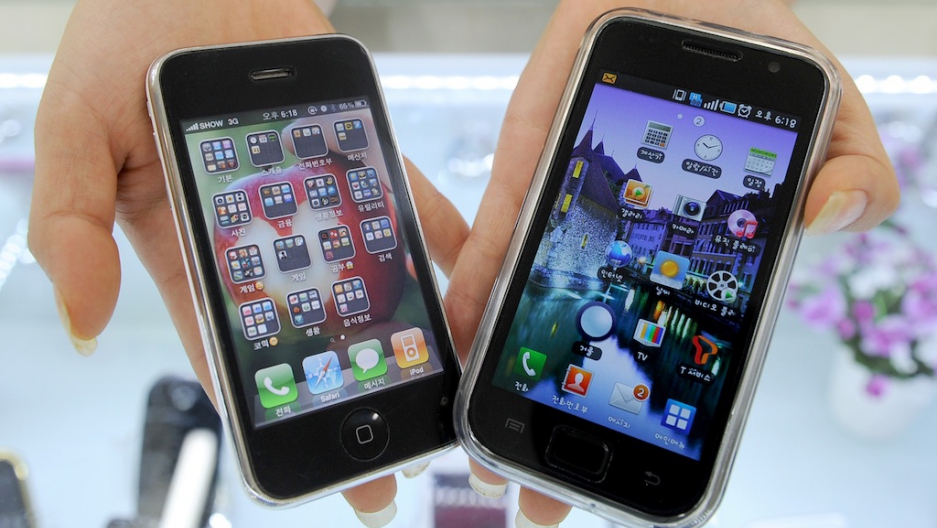 SEOUL, South Korea — Since 2011, two titans of the electronics industry — Samsung Electronics and Apple — have been locked in legal warfare over their smart phones and tablets, slinging more than 50 lawsuits at each other on four continents.

But despite the bitter rivalry, these two giants aren’t really enemies. More like frenemies.

And on Thursday, their conflicting and schizophrenic relationship got more complicated.

After three days of deliberations, a jury demanded that Samsung pay Apple $290 million for 13 patent infringements, bringing the total amount owed to the California-based company to $920 million.

Samsung has taken the bigger beating in the dispute, despite overtaking Apple as the world’s largest smart phone maker. For one, the electronics giant has received a measly 10 percent discount from the original $1.05 billion in damages owed to Apple.

Samsung might have no choice but to suck up the ruling. “The fine represents an expense that Samsung understands may be necessary to continue to sell in the US market,” said Jasper Kim, a law professor at Ewha Womens’ University in Seoul. If Samsung appeals, it could also have a hard time arguing its case. Two separate juries have now ruled that patent infringements did substantial damage to Apple.

Samsung won’t have to struggle to find the money. The company has a $39 billion cash hoard. In the third quarter of 2013 it raked in an astounding $9.56 billion profit.

Yet the ruling wounds corporate pride. For years, Samsung has been trying to shed its image as a “fast follower.” It has yet to create a game-changer like the Apple iPhone or Sony Walkman; Its recent smart watch appears to be a colossal flop. The notion that its fortunes depend on pilfered Apple technology no doubt bristles.

Apple, of course, was happy with the ruling, regardless of whether it’ll receive a slightly smaller payoff from Samsung. “For Apple, this case has always been about more than patents and money. It has been about innovation and the hard work that goes into inventing products that people love,” the company said in a statement. “While it's impossible to put a price tag on those values, we are grateful to the jury for showing Samsung that copying has a cost."

So Apple has declared victory. Now for the hard part: dealing with the awkward reality that Samsung is a major supplier of chipsets and parts for the iPhone and iPad.

The Samsung Group — the name for the more than 80 Samsung affiliates in shipbuilding, semiconductors and even life insurance — has one major piece of leverage over the global supply chain: its octopus-like reach into just about every pivotal tech industry you can imagine.

Because of this, these two adversaries have a history of fighting and kissing. Apple, in fact, depends on the Korean company’s high-tech manufacturing prowess for billions of dollars worth of components in the iPhone and other gadgets.

“I don't see the ruling as changing the Apple-Samsung complex dynamic,” Kim said. “It certainly won't help to warm relations between these two fierce rivals.”

Rivals, maybe. But the two companies have had a more complex relationship since the advent of the personal computer.

It all began in 1983, when Steve Jobs first visited the Samsung Electronics campus in Suwon, South Korea.

The early Apple-Samsung meeting didn’t produce immediate results. In the 1980s, the Korean company was known for making cheap, third-rate microwaves and dishwashers, rather than the sleek Galaxy products of today. But Lee was making his first forays into the high-tech future, investing in semiconductor manufacturing.

It took time for Samsung’s tech investments to bear fruit, but by the 2000s, the company had significant stakes in the holy trifecta of growth: flash memory, mobile phone batteries, and LCD displays. In 2005, the quality of flash memory products — along with Samsung’s financial stability — caught the attention of Jobs, who was looking for a flash memory supplier for his gadgets.

That year, Samsung heir apparent Jay Y. Lee, the grandson of deceased founder Lee Byung-chul, even visited Jobs at his home in Cupertino, Calif. The duo forged an amiable business relationship that lasted until Jobs’ death, one former Samsung executive told GlobalPost on a condition of anonymity. Lee was the only Asian industry executive to attend Jobs’ memorial service in 2011.

Before the iPhone-Galaxy rivalry, Apple placed a great deal of trust in Samsung. The Korean company began supplying NAND flash memory to Apple, a coveted and strategic position in the electronics industry.

But that’s where things got complicated. Analysts say Samsung’s massive position as an industry supplier may have given it a road map for what Apple — along with other competitors — thought about the future of the mobile arena. Samsung denies this; The official company line is that its semiconductor and consumer electronics businesses remain separate.

After Apple filed its patent infringement lawsuit over the Galaxy line in early 2011, many wondered whether Apple would seek to diminish its dependence on Samsung.

So far it hasn’t, possibly because of difficulties finding suppliers who could match Samsung’s quality, stability and delivery speed. Samsung continues to be the world’s largest NAND maker, dominating just under 40 percent of the NAND flash memory market.

Still, it’s possible that Apple is coming close to finding a way out. In October, a report suggested that Apple was turning to New York-based chipmaker GlobalFoundries. Analysts also wonder if Toshiba — the Japanese company that first thought up NAND technology — could take Samsung’s place, given its plans to build a large flash memory factory.

Samsung, on the other hand, may have a sound counter-strategy. The company could be using acquisitions to strengthen its hold on the supply chain. In October, the company became the largest shareholder in American glassmaker Corning, which makes the glass for the iPhone cover and just about every other big competitor.

The California legal battle may be over for now.

But with Samsung’s tentacle-like reach, a long and difficult game of chess is being waged — one that could easily complicate the relationship even more in the future.