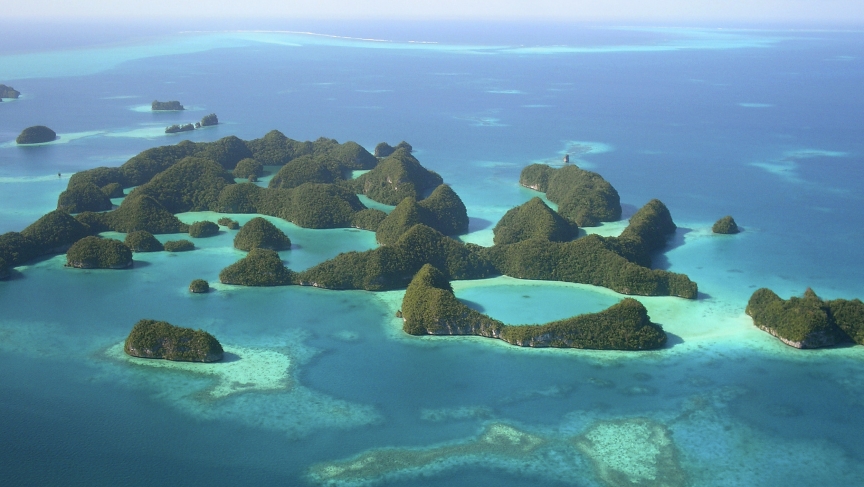 Palau, a nation of sparsely populated Pacific islands surrounded by turquoise waters teeming with fish and giant clams, is so obscure most people must scour a map to find it. Typhoon Haiyan hit the northern island of Kanyangel particularly hard.

The best descriptions are often the simplest. In this case, a small child living on a tiny island in Palau describes the aftermath of Typhoon Haiyan this way: all the trees fell down, and all the houses blew down.

A couple weeks ago, she lived on the island of Kayangel. It's a tiny dot in the middle of the western Pacific Ocean and part of the island nation of Palau. Only 40 or so people live on the island and they are vulnerable to whatever the sea tosses at them.

Typhoon Haiyan essentially leveled the island. The hospital had its roof blown off, but survived, and the Protestant church is okay, too. Reporter Ari Daniel says four families survived the typhoon by crowding into the only room with concrete walls: the bathroom.

Daniel just returned from a trip to the region reporting for the Solutions Journalism Network. He says the people who lived there didn't want to leave their tiny island home. One resident said they preferred to face the typhoon in their home than be relocated to another area.

But in the aftermath, the residents were relocated anyway.

Most residents of Kayangel were taken to the main island of Palau. Twenty people, or about half the population of the island, are living in a community hall. And the residents could be staying there for up to a year. Daniel met one woman who said the hall has enough for them: a kitchen, bedroom, bathroom. That's it.

But while it's enough, it's not home. Daniel says the move has taken a toll on Kayangel residents. Their life is completely different. It's busier on Palau. There's more traffic. Parents are worried their children will be hit by the cars. But part of the reason they were relocated was so the kids could continue to attend school, and not fall behind.

"There's a lot of adjustment that still needs to happen," Daniel says.

Adjustment, and rebuilding — so that residents of Kayangel can one day return home.