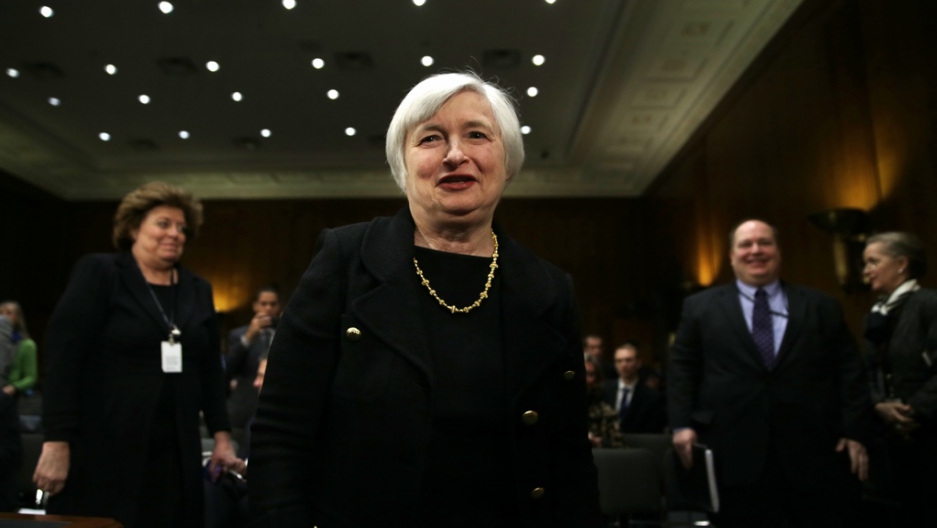 WASHINGTON — Little noticed amid the fur flying over Obamacare has been the slow but steady progress of Janet Yellen, the president’s nominee to replace Ben Bernanke as Federal Reserve chair.

It coincided with a significant lowering of the goal posts, as the Senate’s Democrats pushed through a new rule that removes the threat of a filibuster on any presidential nominee — meaning in effect that Yellen and other pending appointments only need 51, rather than 60, votes.

Things, it seems, are jellin’ for Yellen.

That’s not entirely true — certainly, any Barack Obama ally viewed as a Bernanke protege would be doomed if the House of Representatives had a say. But the House gets no vote on confirmation matters, and in the Senate the support of those five Republicans should ensure that she takes over as Fed chair in the New Year. That makes it likelier than ever that the day of reckoning known as “tapering” will be pushed into next spring at the earliest.

This news has many of the world’s central bank governors — especially in emerging markets — breathing a deep sigh of relief, even as they continue to plan for the day when the US Fed begins to slow the pace of its expansionary monetary policies.

Those policies, known broadly as “quantitative easing” or “QE,” began in 2009 and have pumped about $85 billion a month into the world economy ever since, first by purchasing distressed mortgage assets off the balance sheets of American banks and more recently by printing money to buy US Treasury bonds.

This, combined with “forward guidance” that publicly committed the Fed to keep interest rates near zero percent until 2014 (thus encouraging investment in real estate, stocks and other US assets), is credited by many with preventing the damage done by the 2008-2009 financial crisis from being an even greater drag on the US recovery.

But there has been an important byproduct overseas. Because America’s central bank purchases have had the effect of giving money to US banks at near-zero interest rates, the banks have been able to make a killing simply by depositing that money into domestic accounts in places like Brazil, India and Indonesia, where interest rates are often in double digits.

Now, with 2014 upon us and the Fed talking about tapering — i.e. curtailing this gigantic cash infusion — the easy profits made on these interest rate differences, known to bankers as “the carry trade,” are coming to an end.

And as such, there are widespread fears the flow of money toward the emerging markets will turn into a new version of Ross Perot’s “giant sucking sound.” Banks would return to buying safer, US and developed market bonds (whose rates will rise). Currencies of nations like Brazil, Indonesia, India and Turkey would collapse in value.

Late last summer, as the Fed first began mulling tapering, there was a dress rehearsal for this emerging market crisis — let’s call it EM-aggeddon. Currencies fell drastically in most EM countries. Governments slapped on new regulations (currency controls, tariffs) aimed at preventing the subsidiaries of multinational corporations — and the elites who have grown rich servicing them — from moving their money offshore or into dollars.

Now the big discussion among Fed watchers is about how the US central bank under Yellen, 67, who is now the Fed's vice chair, will be able to taper without causing a new shock to the global economy.

If this is viewed strictly through the lens of politics — as most things are in this city — Yellen’s march toward confirmation would be viewed as a victory for Obama and, indeed, for Bernanke himself. It is Bernanke’s unconventional monetary policies, after all, that Yellen has pledged to continue.

But Bernanke’s magic (or black magic, as some on the right see it) cannot go on forever. Predictions by prominent supply-siders that QE would lead to Weimar-like hyperinflation have been exposed as hyperventilation.

But even Bernanke and Yellen, as the Fed’s most recent meeting notes indicated when they were released Wednesday, concede that tapering needs to happen soon.

The question then is when, and with which guarantees — stated and unstated — from the Federal Reserve’s new leader about future policies.

Some feel Yellen would be loath to wait too long and thus have a potential economic crisis strike just before next year’s midterm elections.

Others feel Yellen will prove even more of a “dove” than Bernanke and announce new criteria for tapering that could put it off into 2015 or later. Certainly, she is known to believe that current US unemployment statistics are a poor indicator of the actual health of the economy due to the large numbers of people who simply drop off the statistical chart when their joblessness becomes long-term.

For the US, this is an important internal debate that will be very difficult to divorce from politics. But for the rest of the world, who get no vote and have even less appreciation for the cross-currents of Washington, a poorly executed “taper” can mean the difference between prosperity and social unrest.

For now, they are thrilled to see Yellen advance. But that tune may change.