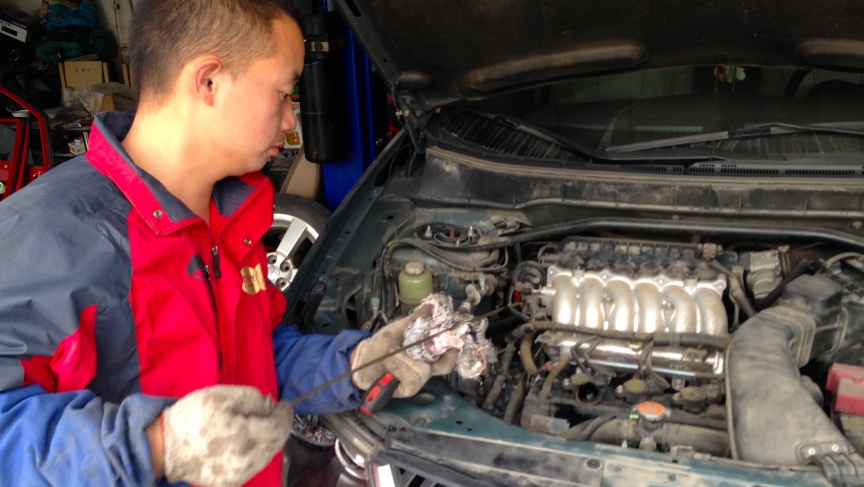 A generation ago, privately-owned vehicles were rare in China. Nowadays, cities like Beijing are looking for ways to curb the public's reliance on private cars.

It used to be that private cars were rare in China. Now, the family car has become so prevalent, Chinese cities are jamming on the brakes.

Beijing is among them, imposing tough restrictions for the sake of traffic and the air.

I paid a recent visit to an auto shop on the outskirts of Beijing, and pretty much everyone I talked with agreed that the city's roads are too clogged.

Beijing traffic can be a nightmare. The city air is some of the worst on Earth. And three-quarters of Beijing's 21 million people still don't even own a car... yet.

Tang Lianghua has been fixing cars for about eight years now. He's 27 and still saving up to buy his first car. It should take another three years or so, Tang says with a chuckle, as he gets back to work on a green Mitsubishi SUV.

Patience and a sense of humor are good qualities to have, if you're a Beijing driver. One reason is that you have to win the lottery to drive here — that's the notorious lottery system that determines who gets new license plates.

Zhang Yushang is a college grad who stopped by the repair shop to pick up his brother-in-law's car. Zhang is also saving up to buy his first car, but he already applied for new plates over a year ago. And he's still waiting.

“Probably will take about another year or two years," Zhang said. "I hear that it's even more difficult now than winning the [cash] lottery.”

That might be a slight exaggeration. But Zhang is right about one thing at least. Beijing officials are getting more and more stingy. This year, they handed out 240,000 new license plates. Next year, it'll be 150,000. And the number will continue to go down for the next several years.

And even when you have a license plate, Beijing restricts the number of private cars that can be on city roads. On Thursdays, for example, if your car's license plate ends with a five or a zero, you can't drive into the city. To get around these rules, some Beijingers are setting up car-sharing schemes. Others have a second car, with a different license plate number.

Liu Xinli and her husband are professionals who live close to downtown and they tend to use the subway to get around during the week. But for weekend trips and for running errands, they share a little silver Peugeot hatchback with both of their parents. That means one car for six people.

"It's not very convenient," Liu says. "Besides, we want a baby someday, and that will make it even harder to live without a second car."

So, once again, Liu and her husband are thinking about the license plate lottery and hoping for the best.

Ma Wen, a 40 year-old engineer, drives an SUV one hour each way to and from work. He lives outside Beijing and works in the city center. He says he supports the government's efforts to get people to drive less and rely more on public transportation. But he is pretty resistant to changing his own habits.

“Too many people in subway," he says. "Too crowded."

But Beijing drivers like Ma could be in for a dose of car-less reality this winter.

The city has announced a new emergency plan in the event of another round of severe air pollution, like the one that made headlines last year. The plan would ban half of all private cars every day. Even-numbered license plates one day, odd numbers the next, until the pollution clears up.