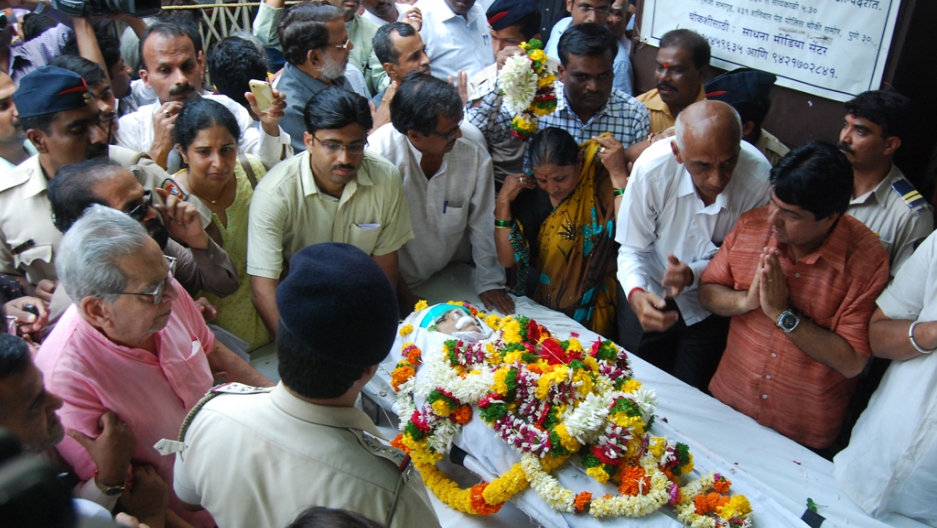 MUMBAI, India — On the morning of August 20, the anti-superstition leader Narendra Dabholkar was assassinated by two men on a motorbike as he walked along the Omkareshwar Bridge in India's Pune city.

Three months after Dabholkar’s murder, no arrests have been made.

At the edge of the bridge where the 67-year-old was killed is a temple dedicated to Lord Shiva, which, like thousands of temples in India, earns millions of rupees in donations each year. Young, old, educated, illiterate – a vast majority of Indians continue to seek spiritual refuge through elaborate rituals — which can be expensive and in some cases, dangerous.

Living in the birthplace of Hinduism, Jainism and Sikhism, and home to a large number of Muslims, Christians, Buddhists, Zoroastrians and numerous tribes, a majority of Indians identify themselves as part of a religion or sect. Making donations – from a few rupees by the poor, to large sums of cash and gold by the wealthier – is also a way of paying obeisance to one's religion.

Dabholkar had spent the last 20 years advocating against religious faith, urging people to see “miracles” and “supernatural intervention” as the work of science. In doing so, he was attacking the business of religions and unsettling the basis of India's caste system, his colleagues say.

“Dr. Dabholkar was very persuasive and persistent in his efforts, indicating his sincerity to eradicate blind faith,” said astrophysicist Professor Jayant Narlikar, who frequently appeared in televised conversations with Dabholkar over the years.

Dabholkar established the Committee for the Eradication of Blind Faith (MANS), which now has 225 branches across the western Indian state of Maharashtra. He became a regular guest on local news programs and at public forums, denouncing practices of blind faith.

The day after Dabholkar’s murder, the Maharashtra government became the first state in India to promulgate an "anti-superstition" ordinance that mandates those "indulging in black magic or preying on peoples' superstitions be jailed for up to seven years." It bans "a range of practices including black magic, animal sacrifice and magical remedies to cure ailments."

The bill had been redrafted at least 29 times due to stiff opposition from Hindu groups, which claimed it to be “anti-Hindu.”

This was seen as an affront to the right-wing religious fundamentalist groups.

“Dr. Dabholkar was working on several fronts and the bill against superstition that was passed following his death was a fruit of his efforts,” said Shahaji Solunke, additional commissioner of police for the crime branch of Pune district. "There are so many channels with so many self-proclaimed gurus, and people are watching them. So obviously he had made enemies. The way he was killed tells us that his murder had been well-planned, and was executed with sophistication.”

“Births and deaths are pre-destined and everybody gets the fruit of their karma. Instead of dying bedridden through illness, or after some surgery, such a death for Dabholkar is a blessing of the almighty.”

The Pune police questioned several members of the organization but no arrests were made.

“How can the ordinance define faith as blind or real? If this ordinance has to become an act, then we'd have to banish all religious texts! Will the ordinance arrest me if I fast for my religion?” said Shambhu Gaware, 37, one of Sanatan Sanstha’s coordinators.

Working closely with Gaware is Sunil Ghanwat, 33, who left a corporate job to work with the organization Janjagruti Manch (Platform to Awaken People on Hinduism).

“Our mission is to establish a Hindu state, across the world. This ordinance proves that there is an international conspiracy to annihilate the Hindu religion,” he said.

Gaware and Ghanwat's words exemplify how practices like 'agori' are prevalent in India.

“A common 'agori' practice is to throw a toddler from the roof of a temple or a mosque, and allow it to fall onto a piece of cloth tied below. This is supposed to make the child stronger,” said Deepak Girme, 62, a real estate developer who has been volunteering with MANS since its inception. Since Dabholkar’s death, Girme has been delivering lectures on superstitions across Pune city.

Girme said that MANS receives at least two calls every month with complaints of humans possessed by spirits, and people willing to pay obscene amounts to “cure” such ailments.

“The most shocking incident that I have ever come across was the murder of a little boy, a few years ago, as a sacrifice by a man to be blessed with children. The boy's burnt and decomposed body was found with his genitals cut, and holes across several parts. The boy's parents were employed to work on the farm of that man. The police wrote off the case as an accident. There was nothing we could do to prove otherwise,” said Girme.

Such beliefs of human or animal sacrifice, and the success of godmen, gemstones, and astrologers, depend on deep-rooted superstitions. In a study conducted by Professor Narlikar and Pune University, eight astrologers were given 200 horoscopes of children with varying mental abilities. By this study, MANS was able to prove that there is no correlation between time of birth, mental abilities, and fate.

Yet in India, the superstition industry is thriving. And many within it saw Dabholkar as an adversary.

Donations and stones for good luck

Hindus widely believe that the Siddhivinayak temple in Mumbai will fulfill a family’s wish for a male child, according to Narendra Kore, 58, the temple’s manager. The temple has 20,000 visitors daily. In the last fiscal year, the temple earned US $11.2 million in cash donations, as well as 9 kg of gold and 111 kg of silver.

Tirupati Balaji temple in the southern state of Andhra Pradesh and Shirdi Saibaba temple in Maharashtra rake in even more in annual donations than Siddhivinayak. And a 2012 news report stated that the shrine of Moinuddin Chisti in Ajmer, considered the holiest shrine for Muslims in South Asia, earns around US $36 million annually.

Another industry based on superstitions is that of gemstones with astrological significance. These stones can cost anywhere from 30 cents to US $81,000, depending on whom one consults. In his plush office in Mumbai, for example, Dr. RD Pala, 49, boasted of a clientele that includes ministers, industrialists and film personalities. “I was initiated at the age of 19 by spiritual heads including the Dalai Lama,” he said.

For many, indoctrination begins at birth and does not end even at death.

“Christians are told to attend church on Sundays; Muslims are told to pray five times; Hindus are told to perform elaborate rituals – people easily buy into such beliefs,” said MANS’ Girme. “India is developing, but superstitions prove that we are still in the Dark Age.”

More from GlobalPost: Bombing in India may be related to religious, sectarian divisions