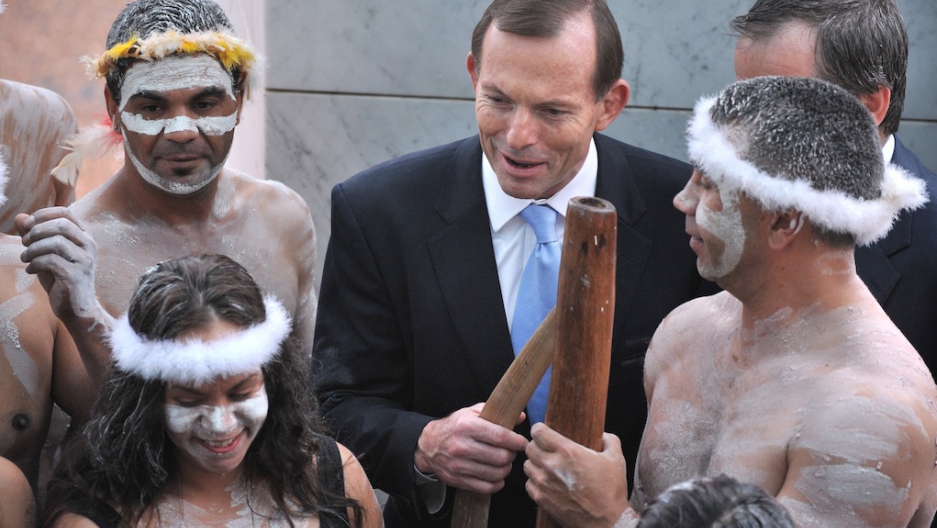 Australian Prime Minister Tony Abbott holds a fighting boomerang while talking to an Aboriginal performer at the opening of the 44th Parliament in Canberra on November 12, 2013. Some Australians say that Abbott's agenda is coming back to haunt him.
Credit: Mark Graham
Share

When it came to a woman whose newborn baby required intensive care in an Australian hospital, his authorities made good on his promise.

The mother, from Myanmar, had given birth to baby Farus last week, after arriving in Brisbane from an Australian detention center on the South Pacific island of Nauru. After the birth, authorities whisked the mother away to a nearby immigration detention center.

They granted her only limited access to the sick infant.

“Guards drove Latifa to the hospital to see her baby only between 10 a.m. and 4 p.m.,” Sophie Peer, Campaign Director at the non-profit ChilOut, told GlobalPost. “Time was not dictated by the baby's sleep, the mother's rest or the doctor's guidelines. This decision was arbitrary and potentially harmful to mother and child, especially when considering feeding options.”

Several days later, the boy was reunited with his mother at the Brisbane immigration center.

But the damage had already been done — and the incident appears to have indelibly stained the Abbott administration’s chaotic first three months in office.

Australian outrage over the baby Farus controversy overshadowed other, more positive recent domestic policy announcements, such as a review of childcare options for families and the axing of a contentious scheme to dump waste into the Great Barrier Reef World Heritage Area.

Abbott — a staunch Catholic — was unrepentant when asked about the baby boy. “I don't, as it were, apologize for what happens when people come to Australia illegally by boat,” he said.

“The United National Refugee Convention clearly outlines the legal right for all people to seek asylum,” she told us. “Australia's present asylum-seeker policy is in contravention of many of our international obligations. The Convention on the Rights of Children sets out the need for decisions to be made in the best interests of the child. Being sent to indefinite detention in a remote camp with limited education, healthcare and basic amenities cannot be in the best interests of any child.”

At the Commonwealth summit in Sri Lanka last week, another storm awaited Tony Abbott. There, despite intense international pressure led by British Prime Minister David Cameron, Abbott refused to add his voice to calls for an inquiry into alleged human rights abuses by the Sri Lankan military during the country’s civil war.

Instead, the Australian prime minster signed a deal with Sri Lanka, agreeing to donate two ex-Navy vessels to the embattled country in return for increased cooperation in the fight against the Sri Lankan people smugglers he says are partly responsible for bringing asylum seekers to Australia.

Sri Lanka, however, isn’t Tony Abbott’s main problem in the region. That honor goes to Indonesia, the departure point for the majority of the dilapidated boats that invariably get into trouble in Australian waters.

Abbott has been frustrated by Indonesia’s lack of enthusiasm for his desire to turn boats around and send the whole asylum problem back to Indonesia. Three recent Australian requests for the Indonesian government to accept asylum seekers picked up in Australian waters were rejected. Revelations that Australian spy agencies tapped Indonesian phones have further complicated the relationship.

Reaching a compromise with Indonesia may therefore prove a significant challenge for the bullish Abbott, whose core election promise was to “stop the boats.”

It may be only three months since he swept to power, but asylum is just one of a number of foreign policy nightmares already hurtling Australia towards international pariah status.

Take climate change. The Australian government was too busy repealing the country’s carbon price legislation last week to bother sending a ministerial delegation to the Warsaw climate talks (though it did send a diplomat).

The carbon tax will be replaced by a “direct action plan” which economists and the UN’s climate chief agree is insufficient to fund the energy reforms needed in the OECD’s highest per capita polluter.

The plan will be overseen by an environment minister who cited Wikipedia in place of scientific facts in an effort to dismiss the link between climate change and Australia’s severe October wildfires. Referring to the online encyclopedia may prove even more necessary in the future, however, given that Abbott has abolished Australia’s science-led think tank, the Climate Change Authority. He has also proposed cutting $435 million from the Australian Renewable Energy Agency, which was set up to fund green energy research and development.

On Sunday, tens of thousands of Australians took to the streets to protest against what they see as government climate change denial.

Alexander Ochs, Director of Climate and Energy at the Washington-based Worldwatch Institute, slammed the announcement last week that Australia would downgrade its emissions reduction targets from 25 percent to just 5 percent below 2000 levels by 2020.

“Emissions in Europe and the United States are [already] decreasing,” he told GlobalPost. “The position of the new Australian government is shameless and irresponsible. And it makes no sense — economically, socially, environmentally, politically.”

He said the policy could have dire consequences for other countries, too.

“Abandoning that pledge could be a deal wrecker for the international community and any meaningful international agreements,” he says. “The Australian government is also considering cutting commitment to the Green Climate Fund, an international fund to help developing countries cope with the impact of climate change. At the same time, it complains about the environmental refugees that arrive at its shore every day because they no longer see a future in their own countries.”

With severe cuts also in store for Australia’s premier federal scientific research institute, CSIRO, it is unclear how Australia will nurture the talent needed to fight climate change.

Ochs says that instead of leading the world in the development of green energy sources, Australia will have to “rely on an economic model from the last century that is dirty, ugly, uneconomic and kills Australians every day.”

The expenses scandal that engulfed the government during its first month seems a long time ago. Whether a current debate over the country’s debt ceiling causes similar consternation is so far unclear.

What is clear is that Tony Abbott is struggling to grasp the big-picture challenges facing his country. Challenges that, whether he likes it or not, involve dialogue with the outside world.

And that outside world is watching.

Lynette Eyb is an Australian journalist currently based in France. She writes about current affairs, health, and social issues. Prior to moving to France, she edited a London-based magazine for Australians.