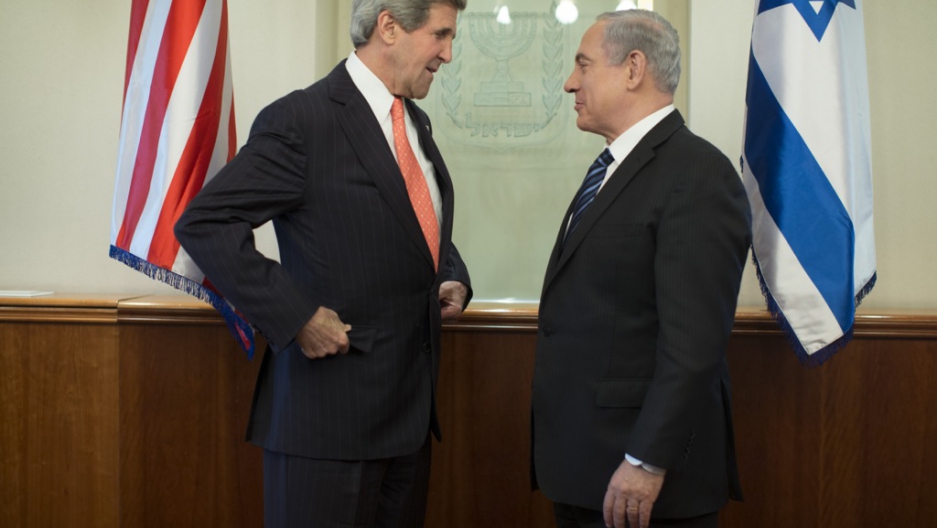 US Secretary of State John Kerry and Israeli Prime Minister Benjamin Netanyahu on May 23, 2013 in Jerusalem.
Credit: Uriel Sinai
Share

JERUSALEM — As major world powers prepare to resume negotiations with Iran over its nuclear program, it is shaping up to be an international week of summits.

The talks begin Wednesday in Geneva. But the jaws are already flapping furiously all around the world.

And in the coming weeks, US Secretary of State John Kerry will arrive in Israel to try to calm nerves and smooth over residual resentment from his previous visit ten days ago, which culminated with an unusually caustic exchange of pique between Kerry and Netanyahu. (Netanyahu had announced that Kerry would visit Israel on Friday, but the secretary of state said Monday they had agreed to push back the trip until after the Thanksgiving holiday.)

When it comes to Iran's nuclear program, the United States and Israel are knotted over two different means of achieving an urgent, shared goal: keeping Iran free of nuclear weapons.

But to longtime observers the two countries look like a long-married couple diverging over the best way to treat a sick child. Should aggressive treatment be undertaken? Is watch-and-wait okay? And when will it be too late?

The United States and Israel both believe a nuclear Iran would endanger world stability. Both also believe the crippling economic sanctions the West has imposed on Iran — often at Israel's instigation and against the will of powerful economic interests — have brought the Islamic Republic to the negotiating table.

But in the eternal debate over the carrot or the stick, President Barack Obama's administration is willing to bet on a few carrots — in the form of reversible sanctions relief — to encourage Tehran to open its nuclear facilities to greater international inspection and decelerate or halt its uranium enrichment efforts.

Israel, on the other hand, believes this is the moment to give Iran another whack of the stick: if sanctions have brought Iran to serious talks, Netanyahu believes, it is counterintuitive to diminish them so long as Iran has not entirely dismantled its uranium enrichment program.

To further complicate matters this week, the ultimate status of US sanctions against Iran will be determined not by Obama or Netanyahu but by Congress.

So, yes, more jaws will flap on the matter.

This week, Obama is expected to brief key senators about progress of negotiations with Iran, and ask them to give diplomacy a chance by holding off on new sanctions.

Israel, meanwhile, has dispatched its hard-line Minister of Economy, Naflali Bennett, to lobby the same senators to toughen the already harsh measures.

The differences of opinion on Iran's nuclear ambitions, however, come down to a matter of degrees.

"The level of threat that Iran presents is very different for the United States and Israel," said Owen Alterman, an expert on non-proliferation and the Israel-US relationship at Tel Aviv's Institute for National Security Studies.

"What also differs is each state's capacity to respond militarily," he added.

The United States possesses bunker-busting bombs specially designed to hit targets located beneath Iran's rocky mountains, which Washington has demonstrated in an attempt to convince Israel it has the capacity to demolish Iran's most fortified facilities. The US has never sold the bombs, however, to Israel.

Adding more tension to the situation this week: Israel has been the longtime target of specific Iranian threats.

"We don't have a pogrom complex," Netanyahu said Monday. "We understand that when people say they want to destroy us — we need to take them seriously. It is my duty to prevent from anyone to commit a second holocaust against the Jewish people."

No matter how many times Obama repeats that the United States will not allow Iran to become a nuclear power, Netanyahu hears a voice asking him to relinquish the fate of his nation to a foreign — and possibly fickle — power.

Yes, it should be an interesting week.