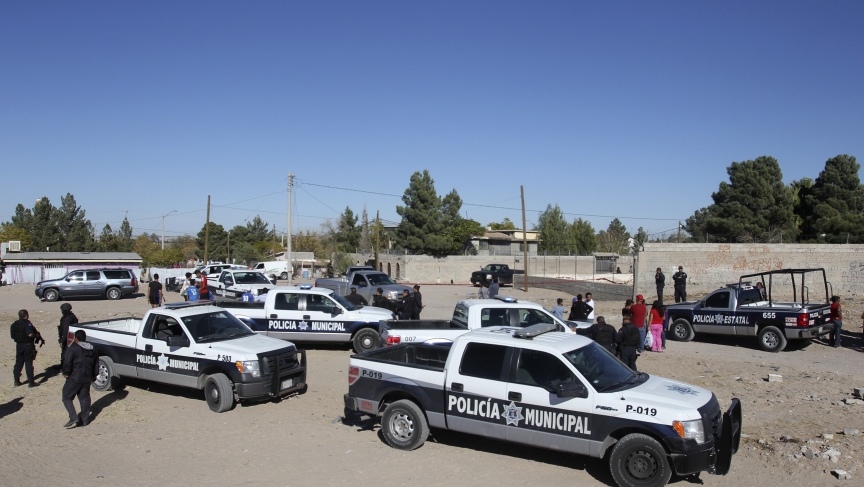 Police officers guard the perimeter of a house where a family was killed in Ciudad Juarez this past weekend.

The border city of Juarez, just south of El Paso, Texas, has been trying to shed its violent reputation.

The murder rate there spiked in 2010, with more than 3,000 people killed at the height of the drug war. But the murders have been declining in recent years, as Juarez residents have worked to reclaim their city from traffickers and other criminals.

Then, the killing of 10 people at a party in September brought back the negative headlines. And now, a new massacre over the weekend in Juarez has shaken the community. A family of eight was found dead on Sunday. The victims ranged in age from 4 to 60.

Alfredo Corchado has been reporting on the story for the Dallas Morning News. He says this is a new low for Juarez and has opened a lot of old wounds.

Ironically, the city just celebrated "the return of Juarez" a few days ago with a big opera that attracted people from both sides of the border.

Corchado says If you think of Juarez as if it were a sick person, you would say the person is in remission, but not necessarily in recovery. As much as Juarez would like to look ahead, the ills of the past are still very much present.

More than 30,000 people fled Juarez for El Paso during the height of the drug wars, and some are now starting to come back. But there’s still a sense of fear.

The city doesn’t have a police chief at the moment. The old one left two months ago and they haven’t found a new one yet. There’s also a new mayor who has been in office for only two months.

So far, police have no suspects in the murder of the family. Reports say that a 3-month-old baby was found alive in the house, having been spared in the rampage.