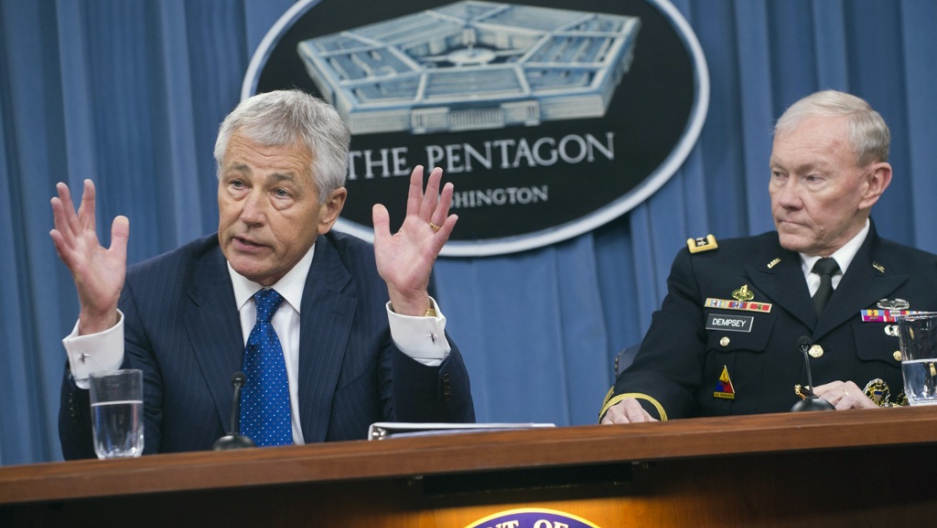 In November, Reuters published the second part of its series on the Pentagon’s management (or lack thereof) of its $565.8 billion budget. And it's a doozy.

You should read the full Reuters report. It's a fabulous piece of journalism. Here are just some of the most troubling things you'll learn:

1) The Pentagon cooks the books

The agency in charge of the Pentagon’s accounting is called the Defense Finance and Accounting Service (DFAS). It seems that a lot of what they do is make things up. The official mechanism for making things up is called an “unsubstantiated change action,” more commonly known as a “plug.”

Plugs help balance the books when monthly budgetary reports fail to match those generated by the US Treasury. And when there’s no information to explain the discrepancies, you just make something up.

Covering up discrepancies with phony numbers makes it difficult or impossible to answer many questions about how the Pentagon spends and tracks its money.

The total amount of plugs in the Pentagon’s finances was $9.22 billion in 2012. According to Reuters' sources, the actual number of concealed errors, phony money, and missing information could be much higher.

Now, financial accounting is tricky business, so those dollars don’t necessarily correspond to actual dollars lost and replaced, but rather, stand in for money spent and received. Make enough mistakes with the accounting, and pretty quickly the actual connection between the numbers on the page and the money in circulation becomes totally imaginary. One DFAS office in Columbus, Ohio, made $1.59 trillions in errors in its 2009 financial reports for the Air Force. About $538 billion of that were plugs. But that's not possible. That number alone was significantly larger than the entire Air Force budget.

3) It doesn't comply with mandatory audits

By law, federal agencies must submit to mandatory annual audits.

The Pentagon is the only agency that has not complied. It has failed to comply every year since 1996, the year when the audits were set to begin. Since 1996, Congress has given the Defense Department $8.5 trillion dollars.

Repeat: that’s 8.5 trillion unaudited dollars. That's half of the current US debt.

Congress has given the Pentagon until 2017 to be audit-ready. Reuters doubts that it will hit that mark.

The Pentagon has no single system for measuring, monitoring, and accounting for money and resources. How many does it have? Two? 10?

It’s amazing that there are 5,000 different accounting and business management systems in the world, much less in use at the Pentagon. But that’s what the Defense Business Board, a defense advisory group, found in 2012.

These are 5,000 systems that, according to Reuters, are not only incompatible but “obsolete.” They use obsolete computer languages from the 1970s. They exist on obsolete mainframes. Their obsolete file systems make it impossible to find data and have rendered much of the data corrupt.

The Pentagon is as bad at accounting for its material resources as it is for its financial resources.

The Defense Logistics Agency, which is in charge of the Pentagon’s supplies, estimates that half of the agency's $14 billion inventory is excessive.

And yet, they keep buying more stuff, in part because there is no reliable system maintaining inventories. Without reliable inventories, it’s impossible to know how much you have and how much you need.

The Pentagon is also something of a hoarder. Take a visit to one of the US Army’s eight Joint Munitions Command depots and you’ll find thousands of rifles from World War II; air-to-air missiles built for fighter jet models that have been decommissioned; or several hundred pounds of dangerously unstable C4 that was made in 1979.

It takes tens of millions of dollars every year to house these obsolete and unneeded munitions. Pennies on the dollar when it comes to the defense budget, but still...

6) It can't keep track of its contracts

The Pentagon spends a lot of money securing goods and services from private external vendors. It has signed over $3 trillion worth of contracts in the last decade. But it’s doing a terrible job keeping track of them.

There is a huge backlog of contracts waiting to be reviewed, audited, and closed out. At the end of 2011, the Defense Departments unresolved contracts totaled $573.3 billion.

In the meantime, nobody knows whether the contractors rendered their services, whether payment was made, and whether those payments were excessive or wasteful. That means no accountability, no oversight, no way of identifying waste and mismanagement.

The Pentagon is aware of all these problems, of course, and it has taken steps to correct them. Unfortunately, those steps have often been as disastrous as the problems they are supposed to correct.

Take the accounting systems problem. Every time the Department of Defense or one of its branches has tried to streamline accounts and business management systems, it’s been a technical nightmare on par with the healthcare.gov rollout.

Reuters has many examples. Here are two:

1. The Pentagon spent $1 billion between 2003 and 2010 on the Defense Integrated Military Human Resources System, which would have replaced several of those 5,000 accounting systems with a single system for managing payroll and personnel. There were too many problems across agencies to make it effective, so it was killed.

2. The Air Force spent $1.03 billion between 2005 and 2012 designing the Air Force Expeditionary Combat Support System. It didn’t work when actually subjected to a test run. The Air Force estimates that it would cost $1.1 billion and another eight years to make it work. That project is now dead, too.