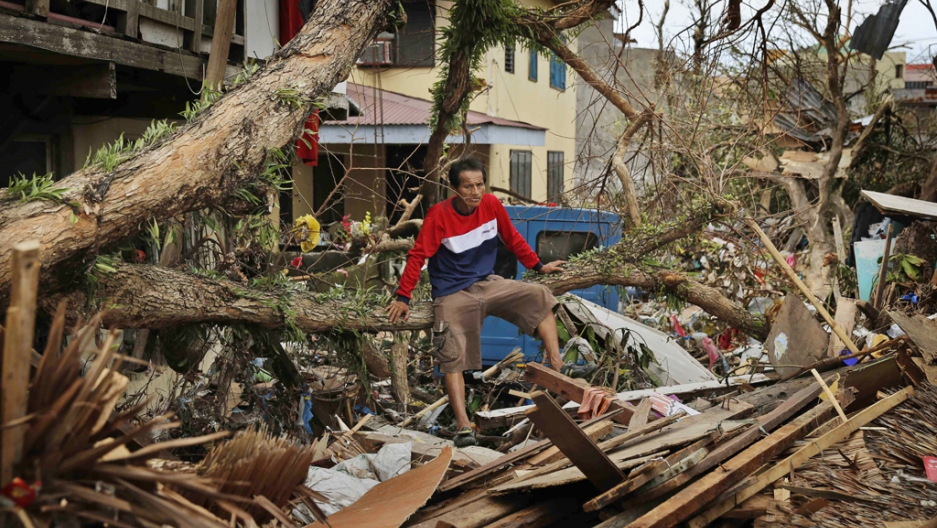 A man sits amongst the wreckage of his devastated home in the aftermath of Typhoon Haiyan on November 13, 2013 in Tacloban, Leyte, Philippines. Typhoon Haiyan, packing maximum sustained winds of 195 mph, slammed into the southern Philippines and left a trail of destruction.
Credit: Kevin Frayer
Share

Since Typhoon Haiyan ripped through the Philippines on Saturday, reducing whole neighborhoods to rubble and killing an estimated 2,500 people, Sheena Opulencia hasn’t taken a break.

When she finds a spare minute between meetings and phone calls for her job as an information manager for ACF International in Manila, she pulls out her smart phone and sifts through hundreds of messages and photos that have been posted on social media about the typhoon.

With the flick of her index finger she categorizes tweets calling for food, water and electricity. She rates photos of the chaos and destruction “mild” or “severe.” Flick. Flick. Flick.

Thousands of others have been doing the same from offices and living rooms across the globe. The information they have logged has been made into a detailed map and the data has been passed out to aid workers to help inform relief efforts.

The project is called MicroMappers. It combines computer-generated algorithms and volunteers to quickly sift through social media noise during disasters.

“Increasingly, with social media, when a disaster happens you have an overflow of user-generated content," said developer Patrick Meier, director of social innovation at the Qatar Computing Research Institute.

“Humanitarian organizations come from a world where an absence of information was the name of the game. They have no idea how to make sense of it.”

Using a series of keywords and hashtags, MicroMappers collected 230,000 tweets during the first 48 hours of the typhoon’s landfall. The application automatically tossed out retweets and filtered for relevance, chiseling the number down to 55,000. Volunteers from around the globe then clicked through the messages manually. Each time a volunteer clicked, Meier said, the computer took note, refining its algorithm.

The resulting map, created using geotagging, has information about things like damage to hospitals and health facilities as well as flooding and displaced populations.

When Adrej Verity, information officer for the United Nations Office for the Coordination of Humanitarian Affairs, stumbled across one of Meier’s maps a few days after Haiti’s 2010 earthquake, his first thought was, “This is a gold mine of information.”

“People are posting pictures and videos almost instantaneously,” Verity said. “If we can find that data and get it collated quickly, it can really help people get a situational understanding of what’s happening much quicker.”

He called Meier and they formed an alliance. Now OCHA combines data gleaned from social media with information gathered from government officials, ground observations and personal interviews. OCHA distributes the reports to NGOs like ACF International, where Opulencia works.

“It is so helpful for aid workers,” said Opulencia. “MicroMappers is so efficient.”

As the information manager for ACF’s water, sanitation and hygiene projects, it is Opulencia’s job to know exactly what is needed where. Damaged roads and felled power lines make traditional methods of information gathering difficult.

The application is designed to monitor infrastructure damage —not the outbreak of disease. But Opulencia said it still helps inform the public health sector’s response. For example, she used the MicroMappers data to identify power outages.

“If there is no electricity, it’s nearly 100 percent certain that they don’t have water,” Opulencia said. Without access to clean water, people are more susceptible to water-borne diseases such as dysentery, cholera and typhoid fever.

More from GlobalPost: Typhoon Haiyan: The situation is dire in outlying Philippine settlements