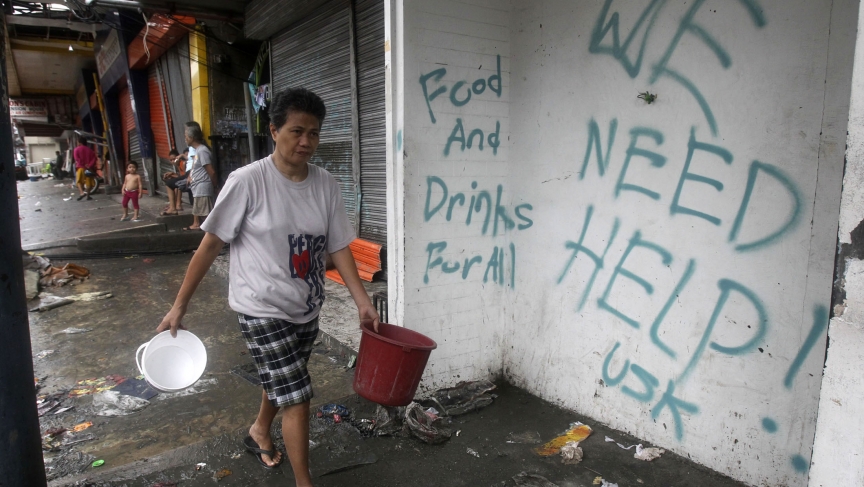 The relief effort for survivors of Typhoon Haiyan has had a wobbly start.

With little aid reaching the center of Tacloban City, the BBC's Jonathan Head reports a sense of panic and fear among the dazed residents. And increasingly, they worry about looting and rape.

But elsewhere, Head says, he sees a "fully-engaged" relief project emerging. At Tacloban's airport, US Brig. Gen. Paul Kennedy has brought in Osprey heavy-lift planes for ferrying aid to remote areas. And Kennedy promises C-17 transport aircraft are on the way.

Head says he saw large shipments of UN aid finally hitting the road on Philippine military vehicles. "It's the first sign where there's been a well-enough organized and guarded distribution of aid that agencies have felt they can actually get it going," he says.

"Up to now, there's been so much chaos in the city, so little evidence of the authorities and near anarchy ... that none of the agencies have wanted to take aid in."

Head has witnessed looting, though he says it is often because of scarcity.

"We've seen a lot of cases where people are lining up initially orderly. People are inclined to be orderly here. But then it breaks down, particularly if they're really hungry and they see that the guards aren't very strong or they're not there," Head says. "Often, these lines outside food warehouses degenerate because there's not enough and people at the back of the line realize they're not going to get any."

Rumors of rapes are on the rise, although Head is quick to note there is no confirmation that women are, in fact, being attacked.

Reporting from Tacloban, he says, "It's hard to get across to you how utterly destroyed this town is. It looks like it's been hit by an atomic bomb. It's just this massive sodden rubble that was people's homes, covering everything with splintered trees. It's uninhabitable."

Head admits it can be difficult to navigate the moral dimensions of reporting on the disaster. His BBC crew had to smuggle their water supply into the airport to avoid being mobbed. He handed out bottles of water to families quietly, so others wouldn't notice.

"It feels like such a futile gesture really ... You see so many children in this ghastly mess with nothing coming in. You just want to hug them and you wish you could do more," Head says. "As a journalist, you do your job, which is to report and hope other people respond. But you do often feel really, really helpless."