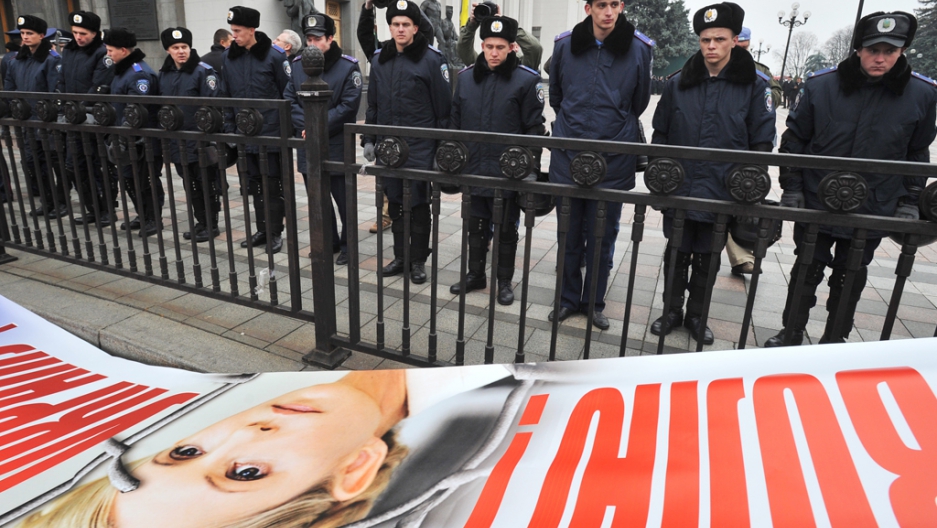 Ukraine's prospects of signing a potentially historic deal with the European Union were dealt a possibly fatal blow after parliament failed to agree a bill that would allow the release of jailed ex-premier Yulia Tymoshenko (on poster).
Credit: GENYA SAVILOV
Share

MOSCOW, Russia — Ukraine’s chances for signing landmark agreements with the European Union appeared all but dashed on Wednesday after the country’s parliament failed to vote on a crucial bill that would have paved the way for ex-Prime Minister Yulia Tymoshenko’s release from prison.

The extraordinary session ended amid disagreement between opposition forces and the ruling Party of Regions over a draft law that would allow Tymoshenko to travel to Germany for medical treatment. Imprisoned since 2011, she’s serving a seven-year term for abuse of office.

EU officials say they will not sign agreements on association and free trade with Ukraine — billed as a major move by the ex-Soviet republic away from Russia’s sphere of influence — until a solution is reached over the former prime minister.

They believe Tymoshenko, a heroine of the democratic Orange Revolution who is President Viktor Yanukovych’s main rival, was jailed for political reasons.

Although parliament speaker Volodymyr Rybak postponed the vote until November 19, European officials are scheduled to decide a day earlier whether Ukraine will be eligible to sign the agreements at a summit in the Lithuanian capital of Vilnius on November 28.

Nevertheless, Alexander Kwasniewski, one of two EU envoys to Ukraine, told a news conference in Kyiv after Wednesday’s session that lawmakers would still have until November 19 to pass the bill.

Some pro-European officials in Ukraine remain pessimistic, however.

“The chances for signing the association agreement collapsed before our eyes today,” Andriy Shevchenko, a lawmaker from Tymoshenko’s Fatherland party and a parliamentary representative to the Council of Europe, told GlobalPost shortly after Wednesday’s session.

He added that he sees “not a single sign that Yanukovych or his team is ready” to reach a compromise.

Ukraine’s leadership, meanwhile, appears disjointed over the country’s pro-European drive as well as a solution to the Tymoshenko issue.

Leading officials have publicly supported signing the agreements, and Yanukovych has said he would approve a bill releasing her abroad for medical care.

But members of his party have sought to toughen the legislation, with some arguing that her release to Germany would amount to a reprieve.

Comments on Wednesday from Foreign Minister Leonid Kozhara were more bizarre. He told the Interfax news agency that he believed “all preconditions are in place today” to sign the agreements with the EU.

Opinion polls say around half the population prefers integration with Europe, while the rest want closer ties with Russia.

Pressure from Moscow has complicated the matter.

Russia has warned Ukraine against European integration, attempting to convince it to join a Moscow-led customs union with Belarus and Kazakhstan instead.

The Kremlin banned imports from popular Ukrainian chocolatier Roshen, citing substandard quality, and closed its border to all Ukrainian goods for a week last summer.

The aggressive moves appear to have prompted consternation among some top officials.

“The number one question for the national economy is the normalization of relations with Russia,” Prime Minister Mykola Azarov told a government meeting on Wednesday, local media reported.

The leaders of three anti-Yanukovych parliamentary factions asked the EU delegation on Wednesday not to submit a negative report about Ukraine on their return to Brussels.

They’re calling for a mass, pro-EU demonstration in Kyiv next week.

Kwasniewski and Pat Cox, the other top EU rapporteur, are scheduled to hold a news conference in Brussels later this evening.