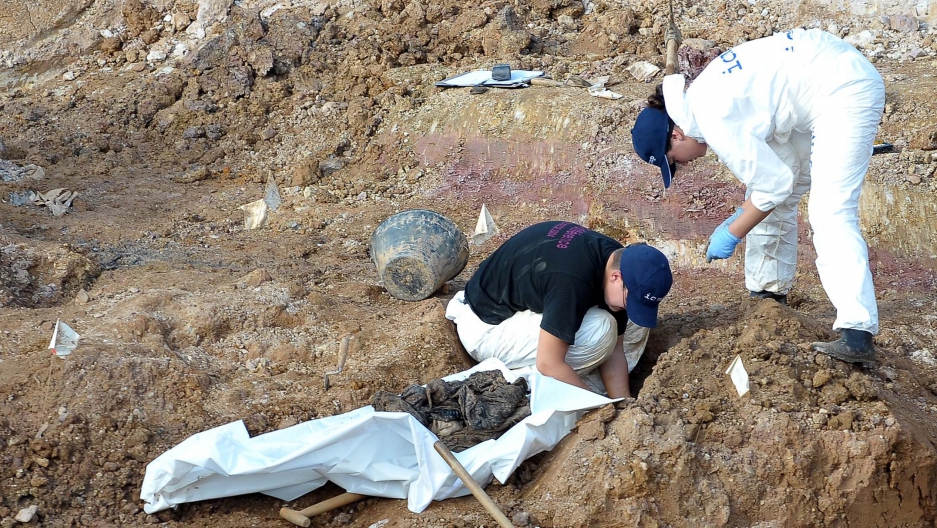 Forensic experts at a mass grave in western Bosnia last month search for human remains believed to have belonged to Muslims and Croats killed by Serb forces. The authorities are still searching for 1,200 people missing from the area.
Credit: Elvis Barukcic
Share

SARAJEVO, Bosnia — Preliminary findings from Bosnia’s first census since the 1992-1995 conflict shows the population has dropped substantially since then, raising concerns about the government structure put in place by the Dayton Peace Accords.

The census results reflect demographic changes wrought by the conflict’s displacement and ethnic cleansing. The new figures are highly controversial because they could upset the quota-based power-sharing system between the previously warring Muslim Bosniaks, Catholic Croats, and Orthodox Serbs.

“Leaders of the three constituent groups will all seek to slice, dice and present the results in the manner most favorable to their interests,” says longtime Bosnia observer Valery Perry of the Public International Law and Policy Group.

All three sides, especially the minority Croats — the smallest population in 1991 — fear their influence will decline.

Although the preliminary data doesn’t include answers to those questions, speculation is rife.

Estimates put the Bosniak population at 40 percent of the population, the Serbs at 30 percent and Croats at 15 percent. The rest — Jews, Roma and other minorities — are identified as “others.”

Although the International Monitoring Organization — which helped finance and oversee the census — deemed none of the three questions necessary, politicians refused to conduct the process without them.

Religious and political groups that rely on the various ethnic power bases led controversial campaigns encouraging people to make their ethnicity known. Perry says some will argue the results show Bosnia has no cohesive sense of “citizenship.”

How the quota system will actually be affected, however — and how soon — remains unclear because the laws mandating the quotas refer either to “the last census” or “the 1991 census.”

“That’s not a subtle distinction,” Perry said. If the Republika Srpska remains seen as largely mono-ethnic, for example, many positions currently earmarked for Bosniaks, Croats or others could be eliminated.

The final results won’t be completed for at least another year, meaning speculation will be rife during general elections next year.

Politicians and religious leaders have already been quick to claim access to the final results.

Sejfuddin Tokic, a former Social Democrat who now leads the Bosniak Movement for Equality of Peoples, announced this week that based on data obtained by his activists, 54 percent of Bosnians declared themselves Bosniaks, well up from 34 percent in 1991. He also said Bosniaks make up 17 percent of the population in Bosnia’s Serb entity, Republika Srpska.

“They are using [the numbers] to raise the bar of expectations in order to be able to make political claims in the future,” said Darko Brkan, an activist who oversaw the NGO CensusMonitor, a website tracking irregularities in the process.

Croats worry that if they’re found to make up less than 10 percent of the population, their status as a third “constituent people” will be undermined, says Florian Bieber of the University of Graz in Austria.

“The near complete equality of all three communities in the legal and institutional sense is harder to maintain in case Croats would be a third or less of the next largest community,” he said.

Equally important for the Croats, as for the others, is where they live.

“If they’re more distributed than the Croat nationalist parties claim, the argument for a third entity for Croats will be weakened,” Bieber said. However, “if Croats live overwhelming in Herzegovina and Western Bosnia, the case for an entity may be stronger.”

Accordingly, Republika Srpska’s leaders will seek to prove their slightly smaller region is now predominantly Serb, even though only 54 percent of the area was inhabited by Serbs in 1991.

Some worry that would encourage the secessionist aspirations of the region’s leader Milorad Dodik.

Inga Kotlo, a census team captain in the southern city of Mostar, said some identified their nationality as “Martian” or their religion as “believer.”

“There’s a certain amount of distrust toward the project because they suspect the results will be manipulated by certain political groups,” she said.

More from GlobalPost: No deal on Tymoshenko as Ukraine’s European hopes fade

Brkan, who was involved in the “Coalition for Equality” campaign — which urged people to declare themselves “Bosnians” — believes around 20 percent of the population will be counted as “others.”

Although completion of the census has been a key condition for joining the European Union, there’s still a long road ahead. As the process was getting underway, the EU announced it was cutting the equivalent of $63.6 million in pre-accession funds because of political stagnation.

A veteran European diplomat familiar with the EU accession negotiations lamented that long-overdue constitutional reform has stymied progress. Completion of the census, however, is “one of the few positives in the past year.”