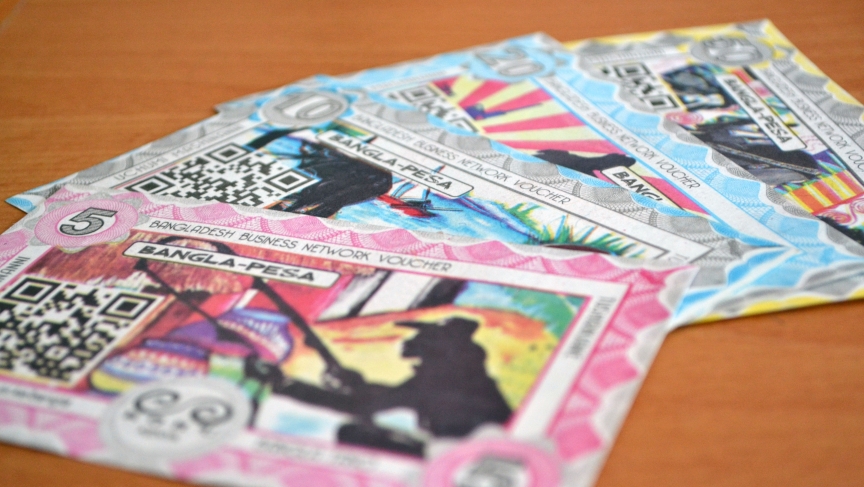 Most of the original Bangla-Pesa notes were confiscated by police when Ruddick and others were arrested. Since then, the community has had to print new notes with holograms and security seals to prepare to relaunch the program.

Every picture you've ever seen of an African slum — that's this place. It's called Bangladesh, but it's outside of Mombasa, on Kenya's coast.

It has dirt roads packed hard by bare feet, and open sewers running next to them filled with trash. The main road is lined with blocks and blocks of tin-roofed sheds with tiny businesses inside. Everybody here is an entrepreneur, just to survive.

“I have a tomato and cabbages business,” says Emma Onyango, who sells produce from a little wooden stall. Other people sell fish or corn meal. Even the mayor repairs clothes on an ancient sewing machine.

While everyone here is selling something, very few people have cash to buy anything. And that was the dilemma. The local economy was at a standstill because there was no cash.

“Imagine a silly situation with a bunch of people sitting around with goods and services to trade with each other, but they're not, because they don't have money,” says economist Will Ruddick. “Sounds insane, right? It's dumb.”

Will Ruddick is an American who lives in Mombasa. Last year, he got together with a group of local businesspeople and started asking some pretty revolutionary questions.

"What is this thing called money that they need so that they're not poor? Can we replace it with something they can use on a daily basis?"

Their answer was to print a kind of paper voucher that people could use instead of cash for their local trade. More than 100 businesspeople signed up to use it, like a microcredit loan — but backed by the faith and credit of the community, not the bank. They named it Bangla-Pesa, after the name of the slum and the Swahili word for money.

When the people here started using the vouchers in May, everyone suddenly had more resources to spend. Will Ruddick says trade jumped 22 percent in the first week.

“About three weeks after that, the police decided that it was a forgery,” Ruddick says.

It started with articles in the local paper that implied Bangla-Pesa was part of a secessionist movement with shady links to Islamic terrorists. You can imagine what happened next.

“First, they came into the community and started rounding people up," Ruddick says.

“We were threatened,” says Emma Onyango. “[They said] don’t use this money, it is bad money.”

Ruddick adds that, “police were running around asking people whose door to knock down, who's abetting the terrorists.”

Kenyan police threw Ruddick, Onyango and four other community leaders in jail and charged them with bank fraud, which could mean seven years in prison. They were ultimately released on bail.

It’s not the first time currency experiments like Bangla-Pesa have drawn scrutiny. Similar ones in Thailand and Brazil have ended up in court, and the people won. Ruddick spent the summer fighting the charges with a public education campaign. An international conference on complementary currencies at The Hague circulated a petition in support of Bangla-Pesa. More than 600 people signed.

After four months, Kenya's public prosecutor finally dropped the charges. But it’s taking time to convince people in the slum that it's safe to use Bangla-Pesa again.

“We are really frustrated, because business is down,” Onyango says.

The community had to pay to print new vouchers with holograms and security seals. But sometime in November, Bangla-Pesas are expected to go back into circulation. This time, Ruddick says, the local government is invited to celebrate the launch.