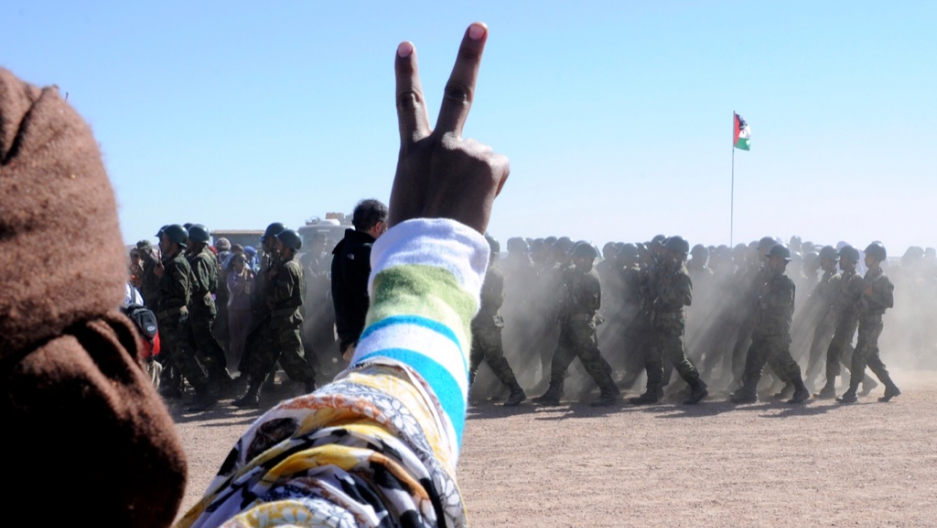 A man flashes a victory sign as soldiers from the pro-independence Polisario Front parade on Feb. 27, 2011 to celebrate the 35th anniversary of the proclamation of independence of the Democratic Arabic Sahrawi Republic, in the Western Sahara village of Tifariti.
Credit: DOMINIQUE FAGET
Share

DAKHLA REFUGEE CAMP, Algeria — In a large tent shrouded in dust, Safia Lansar’s family gathers to drink tea. The 85-year-old’s grandson-in-law, Mohamed, rhythmically pours the steaming liquid back and forth from cup to cup. Mohamed's infant son lies sleeping on the ground, wrapped in a cloth swarming with flies.

They sit on the land where Mohamed was born. His son was born here, too. But not Safia.

“When Morocco invaded and the bombs began to fall, we ran to the hills and hid between rocks for three months before the rebels came and helped us escape,” says the great-grandmother, recounting how she arrived at this sprawling refugee camp in southwestern Algeria. “I thought we would be gone for maybe a week. I never imagined it would be this long.”

The conflict in the Western Sahara is Africa’s longest-running territorial dispute. The tangled fight for land between the Sahrawi rebel Polisario Front and the Moroccan government has dragged on for nearly 40 years while mediation efforts have floundered.

Regional security worries are inspiring new interest in solving the decades-old battle. The United Nations is especially concerned that extremist violence in nearby Mali might spread to the Algerian refugee camps, home to thousands of frustrated and unemployed youth.

But young Sahrawis are already fighting for a cause of their own.

The generation of Sahrawis born and raised in the refugee camps has come of age — and they're tired of living a life in exile without jobs or prospects while the world turns a blind eye. After so many years without progress, they now say they're ready to use violence.

“No one wishes for war, we know life is precious,” says Omar Hassena, the 31-year-old director of the youth union at the Boujdour refugee camp, one of four in Algeria controlled by the Polisario. “But it feels like we are already buried alive; what is there left for us to lose?”

The young adults are frustrated that their struggle hasn't gotten the same international attention as the uprisings commonly considered part of the Arab Spring.

Most Sahrawis — the once nomadic people native to the Western Sahara — arrived in Algeria in the 1970s and 1980s, fleeing violence between Morocco and the rebels. An estimated 150,000 have been living in rebel-controlled refugee camps ever since.

A massive sand wall, 1,500 miles long and scattered with more than a million land mines, divides Moroccan-controlled Western Sahara from Polisario-controlled desert that lies east of the fortified berm. All of the resource-rich, livable land is part of the Moroccan territory along the coast.

Until 1975, Spain controlled the Western Sahara. Morocco and Mauritania both laid claim to the Colorado-sized strip of land on Africa’s western plank; Spain settled that dispute upon its exit by partitioning the land between the two African states under the Madrid Agreement.

By then, Sahrawi rebels had formed the Polisario Front — both an informal political entity that represents Western Sahara natives and a guerrilla force that fought for Sahrawi independence, supported by Algeria.

The Polisario convinced Mauritania to sign a 1978 peace deal to return their portion of Western Sahara land to the Sahrawis. But as soon as they did, Morocco pounced, moving in to take the terroritory. A guerrilla war between the Sahrawis and Morocco began in earnest, lasting more than a dozen years.

The UN brokered a ceasefire between Morocco and the Polisario Front in 1991, under the agreement that a referendum on independence would take place.

“When a person comes here, the first thing they say is, ‘Why, God, have these people been here for so long, for 35 years?’” says Khadad Emhamed, a Polisario Front leader who has worked as a liaison to MINURSO, the UN peacekeeping mission in the Western Sahara. “At the end of the day, what’s the problem? These people are suffering for all these years, just for the right to vote, for no other pretention, just to choose our own future.”

The Moroccan government did not respond to repeated requests for comment for this article.

“Nobody will do anything unless something extreme happens and because there is no political will by anybody concerned, including the UN,” said Anna Theofilopoulou, a former UN official who served on the negotiating team of a previous envoy to Western Sahara.  “The status quo is preferable to all concerned.”

All concerned, that is, except the refugees.

On a scorching October afternoon in Dakhla, the most remote of the four refugee camps, a group of young men and women cram into a conference room for a meeting of the Sahrawi youth union. As they talk with visiting journalists, the question of a return to armed conflict comes up. They unanimously say they are in favor of war, though they add that, as of now, they wouldn't act without the Polisario's blessing.

But with politics failing to make any progress, they're pushing their leaders to consider other means.

“To a certain extent, we hold the Polisario responsible for this failure,” says Abba Mohamed, the doctor. Others chime in to say it’s the international community and the UN who are to blame.

Polisario leaders say they are acutely aware of growing frustration among Sahrawi youth.

Mohamed Abdelaziz, the president of the Sahrawi Democratic Arab Republic, as the Polisario's government-in-exile is known, sits in a dilapidated meeting room at his presidential compound in Rabouni, the administrative center of the Polisario camps.

The pressure to return to war is becoming almost unbearable, he says. For 40 years, the Polisario has maintained unity among the Sahrawi people by investing in education and advocating for their rights to self-determination.

"But until when?" asks Abdelaziz, surrounded by elderly advisors dressed in blue, robe-like dara'as. "I don't believe it can be an eternity. Patience has its limits."

In an April report, UN Secretary-General Ban Ki-moon warned that the conflict in nearby Mali could be a "ticking time bomb" for the Western Sahara if Al Qaeda-backed Islamists infiltrate the refugee camps.

Morocco, a longtime ally of Western governments fighting terrorism, has sought to link the Polisario and Algeria to extremist groups. But there has been minimal evidence so far to support the connection.

“I do not see anything that shows the Polisario as an organization is becoming involved in these terrorist networks,” says Marina Ottaway, senior scholar at the Woodrow Wilson center in Washington, DC.

“But I think that there is beginning to be some evidence that there are some Saharawis who are beginning to show up in these organizations,” she adds. “For the time being, it looks more like individuals that are going into these groups because they don’t have anything else to do.”

Observing life in the camps, where Sahrawis practice a moderate version of Islam and where women hold many high-ranking positions, the threat of radicalization seems unlikely. Reasonable anger and frustration are far more common.

Back in her tent, Safia Lansar says she's grateful that the Sahwari youth — for now — have the wisdom not to restart the fight she left behind so many years ago.

"Morocco is destroying us," says Lansar. "Thanks to God that [the youth] listen to us."