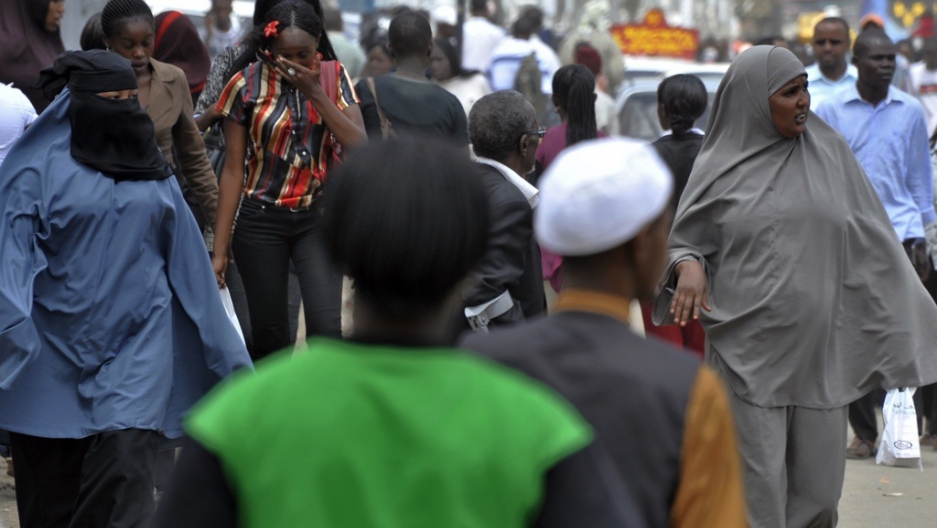 Residents of Eastleigh, a Nairobi neighborhood known for its Somali immigrant population, walk on January 18, 2010 in a commercial street.
Credit: Simon Maina
Share

NAIROBI, Kenya — The Westgate Mall terror attack may be fading from global headlines, but the political fallout of the deadly assault continues to reverberate across East Africa.

Hundreds of thousands of Somali refugees are set to return home after Kenya and Somalia signed an agreement less than two months since a Somali terrorist group attacked the Nairobi shopping mall killing at least 67 people.

Kenyan government officials believe that northeastern Kenya's Dadaab, the world’s largest refugee settlement, is a breeding ground for Al Shabaab, the Al Qaeda-aligned group that claimed responsibility for the attack on Nairobi’s Westgate Mall in September.

On Sunday Kenya’s Deputy President William Ruto and Somalia’s Foreign Minister Fawzia Yusuf Adam signed an agreement, together with the United Nations refugee agency (UNHCR), enabling the voluntary return to Somalia of refugees from camps in Dadaab and Kakuma as well as from Nairobi over the next three years.

According to UNHCR figures, the bulk of the 475,000 registered Somali refugees in Kenya live in Dadaab, a sprawling city-sized agglomeration of five camps close to the Somali border that is home to 388,000 refugees.

A further 54,000 live in Kakuma refugee camp in the remote northwest of the country, while another 33,000 live in Nairobi. Some have lived in Kenya for more than 20 years after fleeing the collapse of their country into civil war in 1991.

During the signing, Ruto expressed Kenya’s frustration and fear over the presence of Somali refugees.

“It is not the tradition for an African country to complain about visitors, especially those fleeing from danger. Even so, the large number of undocumented refugees, as well as the sheer magnitude of the entire refugee burden, has created unprecedented security challenges for Kenya,” Ruto said.

In the days after September’s terrorist attack, Kenyan parliamentarians called for Dadaab to be shut and Asman Kamama, chairman of the Administration and National Security committee, described the camp as “a nursery for terrorists."

“Some of these refugees have abused our hospitality and kindness to plan and launch terror attacks from the safety of refugee camps,” said Lenku, despite providing any evidence to back the claims.

“This cannot and shall not be allowed to continue anymore,” Lenku said.

The UN is at pains to emphasize that returns must be voluntary but there are fears here in Kenya that pressure — or worse — will be put on refugees to leave.

Those fears are not unwarranted. In 2011, New York-based Human Rights Watch documented cases of Somalis being forcibly deported by Kenyan security forces.

“It’s very important to underline that no one is forcing Somalis to leave Kenya,” said Raouf Mazou, UNHCR’s country representative.

Reflecting the increased suspicion of Kenya’s Somali population, media coverage here of the refugee agreement paid little heed to the voluntary aspect of the plan.

“Somalia To Take Back One Million Refugees,” stated the front page of Monday’s top-selling Daily Nation newspaper. The word “voluntary” did not appear in the story.

Al Shabaab has lost control of many towns over the last two years but continues to dominate large parts of the countryside in southern Somalia. Guerrilla attacks on African Union troops, suicide bombings and improvised explosive devices, or IEDs, are commonplace. In recent weeks Kenya has stepped up aerial bombardments of suspected Shabaab bases.

Nevertheless, Ruto insisted that the time was right for refugees to return. “In many parts of Somalia, conditions are favorable for the safe return of our brothers and sisters,” Ruto said. “Somalia is firmly in a post-conflict phase.”

The timing of the agreement has dismayed some observers. “There’s a direct contradiction between the resumption of the war and the pushing of the refugees back,” said Ben Rawlence, an Open Society Fellow who is researching a book about Dadaab.

“South and central Somalia, including Mogadishu, is an ongoing armed conflict, and conditions are not yet conducive for return. Daily attacks continue to take place,” said Gemma Davies, Somalia researcher at Amnesty International.

“It is imperative that Somali refugees in Kenya do not feel pressured to return,” she said.

Those who choose to return may find life harder than in the refugee camps where aid agencies provide food, health care and schooling.

Southern Somalia offers almost no basic services and is under the control of ill-disciplined government troops, foreign armies and a patchwork of militias with differing and shifting allegiances.

“Given that the Somali government is incapable of providing protection for its citizens currently in Somalia, it is highly questionable whether it will be able to create conditions of safety and dignity for refugees who return,” Davies said.