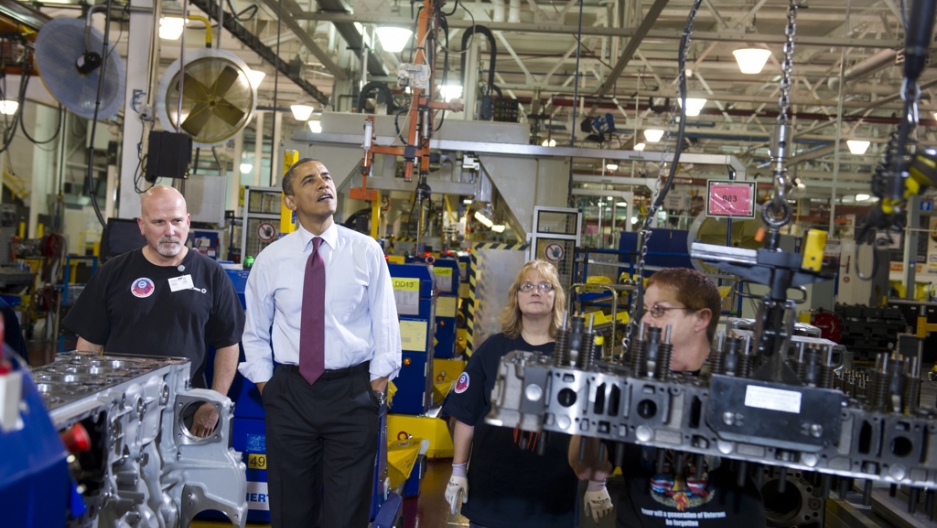 The president hopes more foreign firms like Germany's Daimler, which operates this plant in Detroit, will invest in the United States.
Credit: Saul Loeb
Share

NEW YORK — The damage Washington’s recurring games of debt default chicken does to America’s reputation tends to be fairly anecdotal. Government employees sent home without pay doesn’t move public opinion, which appears to assume that anyone with a future pension is beyond pity.

So, too, are abstract calculations about the reputational harm done to America’s brand — our ability to lead on the global stage.

To such arguments, the average American answers, “Why should I care what foreigners think?”

One reason is foreign direct investment in the United States, known as FDI. That's the money foreign companies invest in factories, offices and other employment-boosting enterprises based on US soil.

Over the past 30 years, FDI has grown from a small to an important creator of jobs and economic activity. During that period the US has gone from a somewhat inefficient, waning manufacturing power to the global leader in services, high technology and innovation.

The numbers are troubling and could suggest that traditional heavy investors — from German and Japanese carmakers that site plants on US soil to the Chinese, Gulf and other sovereign wealth funds (SWFs) that buy America’s debt — may have decided their money would best be spent elsewhere.

Foreign purchases of US Treasury bills, the bonds that underwrite America’s debt, are measured separately. However, FDI and “T bill” purchases are closely related, both based on calculations about the stability and potential growth of our economy.

“The case for investing in the world’s biggest economy is no longer self-evident,” the Financial Times wrote.

If you’re still shrugging this off, look at it this way: The University of Michigan has reported that workers at majority-owned affiliates of foreign companies in the US received 25 percent higher salaries than those who worked for American firms. These jobs are all over the US, at global giants like Unilever and Shell (Anglo-Dutch), BMW and Daimler (Germany), Chrysler (Italy — yes, that’s right), Toyota (Japan), GlaxoSmithKline (UK), and even the newly acquired-by-China sausage factory Smithfield.

So the jobs at stake are good ones.

Alarmed by the decline, President Barack Obama told a foreign trade conference in Washington last week he would prioritize efforts to draw FDI and to help mayors and governors who have traditionally been left to fend for themselves against national efforts by other countries.

Is the president playing politics with this issue? Perhaps. Certainly the spate of post-Lehman regulatory reforms, and separate-but-equally burdensome tax and health care changes any foreign operations in the US would have to wrangle with, could be dissuading some investment.

But the issue exists, nonetheless. Strobe Talbott, president of the Brookings Institution, a Washington think tank, described senior Chinese officials he met in late October as “breathing a huge sigh of relief” that the debt ceiling debacle did not go all the way to default.

“I can’t overstate the unhappiness in China about this,” he said, though he did not think they would stop buying American debt or looking for bargain-basement American corporate assets and real estate just yet. He described them as “very concerned investors.”

Whether the drop in FDI — or “inbound investment,” as economists call it — is a cyclical blip or the beginning of a downward trend in foreign investment is not yet clear.

Compared with previous highs ($314 billion in 2000 and $306 billion in 2008), the 2012 figure of $167 billion certainly suggests a shift in confidence may be taking place. It is not much above the recent low, clocked during the crisis year of 2009, of $143 billion, according to the United Nations Conference on Trade and Development.

Yet put another way, a trend is visible. In 2000, according to the Organization for International Investment, a trade group that represents the US operations of global firms, the US economy drew 37 percent of all capital invested overseas. The figure for 2012 fell to 17 percent.

Some of this could be explained by the global trend toward investing in big emerging markets that grew rapidly over the past decade, such as China, India and Brazil. But even taking that into account, the US has fallen more than most other advanced economies, according to the Organization for International Investment.

Then again, some — perhaps many of the same people who would be happy to see the US default on its foreign debt — would shrug and say, “We don’t want all that foreign money anyway.”