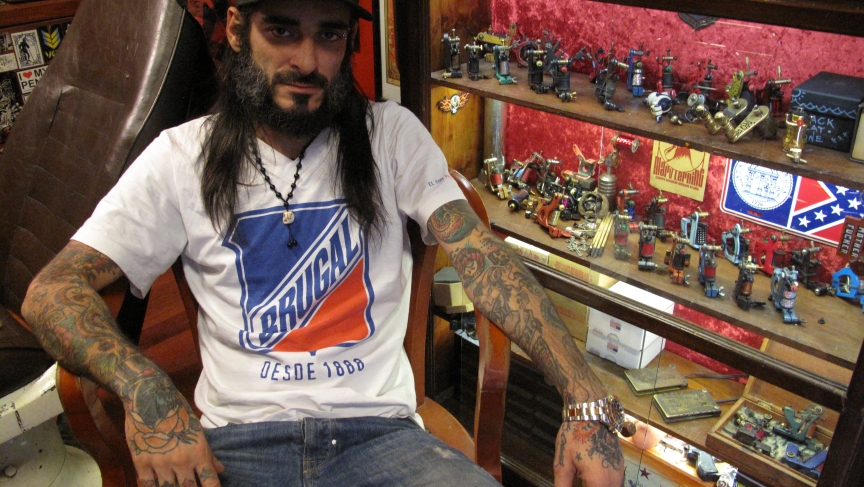 It could be the noisiest “moment of silence” in the world. In Turkey, each year on Nov. 10, sirens, whistles and horns erupt at 9:05 a.m. for about a minute.

It’s to mark the passing of Mustafa Kemal Ataturk, the creator of the modern nation of Turkey, built from the ashes of the Ottoman Empire after the World War I.

This Nov. 10, about a million people turned out at Ataturk’s mausoleum in the capital Ankara. In Istanbul, tens of thousands of people crowded in and around Dolmabahce, the 19th century Ottoman palace where Ataturk died 75 years ago.

Those are some of the official commemorations. Yet some Turks have come up with their own ways to honor modern Turkey’s secular founder. At his tattoo parlor in Istanbul's fashionable Moda neighborhood, Danny Garcia offers free tattoos of the late statesman's signature.

Garcia, who grew up in Germany as the son of a Spanish father and Turkish mother, says he admires Ataturk for westernizing Turkey. He says he’s disturbed by what he sees as a growing gap in Turkey between Eastern and Western values.

“We are trying to be modern, European,” Garcia says, “and the other side is trying to go back to Islamic culture. I don't want that style of life.”

Garcia says just a few years ago, dozens would line up for the free Ataturk tattoo. But not this year — only one man came in for the inking. Garcia notes it was a Sunday, and there was a big soccer match.

“I hope that was [what] affected it; not something else,” he said.

It’s possible that people were distracted by the big match. But the reality is tht Turkey is changing. For the past 10 years, the government has been run by the Islamist AK Party, and public signs of religion are increasingly accepted in Turkey.

Early in November, the state religious directorate issued an advisory on its website saying tattoos are “unclean” and not in accordance with Islam. But Garcia says he’s not too worried about what that means for his tattoo business.

In the meantime, anyone who wants a free Ataturk tattoo in Istanbul will have to wait until next year.