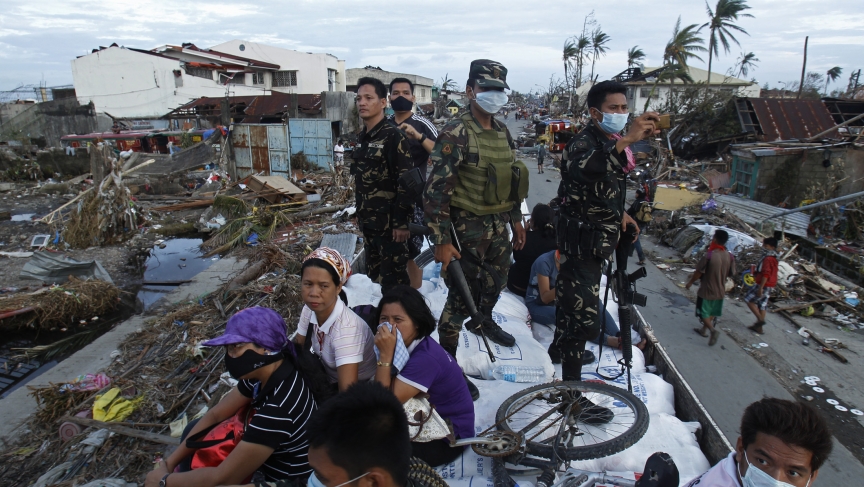 Soldiers and residents look at the devastation of Tacloban from an aid distribution truck after Typhoon Haiyan battered the city in the central Philippines Nov. 11, 2013. Dazed survivors begged for help and scavenged for food, water and medicine.

The Philippines continue to struggle with the aftermath of Typhoon Haiyan.

Hundreds are confirmed dead and the death toll in just one city is expected to reach 10,000. Thousands are missing, especially in areas that are inaccessible to the outside world.

But some locals have been able to get into some of the hardest hit areas. Kevin Vacca and his wife live on Cebu Island. They've been working as missionaries in the Philippines for the last 14 years. The two were among the first to arrive at a disaster area on the northern tip of Cebu.

"Some areas, there's no house standing," said Kevin Vacca. "The only thing you see [are] mattresses hanging in trees, couches out in the field where houses used to be [and] thousands of clothes just hanging on broken branches of trees. People have lost everything."

He helped clear the road, so relief supplies could get in — including about 500 pounds of rice that he was carrying. The problem, he said, is the lack of clean water.

"Most of these small towns have these little bottle water filtration family businesses. Those that have a generator are making water for people to drink. But there's no water for toilets. There's no water for hygiene. It's only water to drink, but we're thankful for that," he added.

Cirilo Cena lives in Lapu Lapu City, near a hard hit region of the Philippines. He works for a US-based company, providing online technical support. Cena said that even though he and his parents have lost the roofs of their homes, and he hasn't been able to track down a sibling, he's returned to his job — working online answering complaints from his company's American customers.

"I can't really think straight.  I just came from a super typhoon. I’m not even sure if my [online] answers were right during that day. I felt like 'Wow, these people are so concerned about these emails, and they don't know that the person answering them just survived a major catashrope,'" he said.

Asked why he continued to work during the disaster, Cena said, "I have to do my best and secure my job. I have to answer these people's problems, though they're very small problems about their website. I need to make sure I still have a job."

For some survivors, fear has turned to desperation. Survivors are looting from neighbors and from shops, said Jojo Malig, Deputy News Editor at ABS-CBN News in Manila.

"They're driven by desperation. They have lost everything. They have lost their houses. They lost their belongings and aid does not reach them," he said. "The roads are closed. The airport has just reopened. And efforts are underway, but I hope [they] reach them in time."

The Philippines is vulnerable to tropical storms because it sits along the typhoon belt. In the last decade, the country has lived through eight major natural disasters, including an earthquake, landslides and a cyclone. Filipinos, Malig said, have "bounced back every time disaster hits. But many lessons have to be learned.

"Efforts were made to bring people to safer ground, but some people died inside evacuation centers, and perhaps [the] government needs to assess emergency procedures. There ought to be a more comprehensive program in regard to preparing and evacuating people out of harm's way," he said.