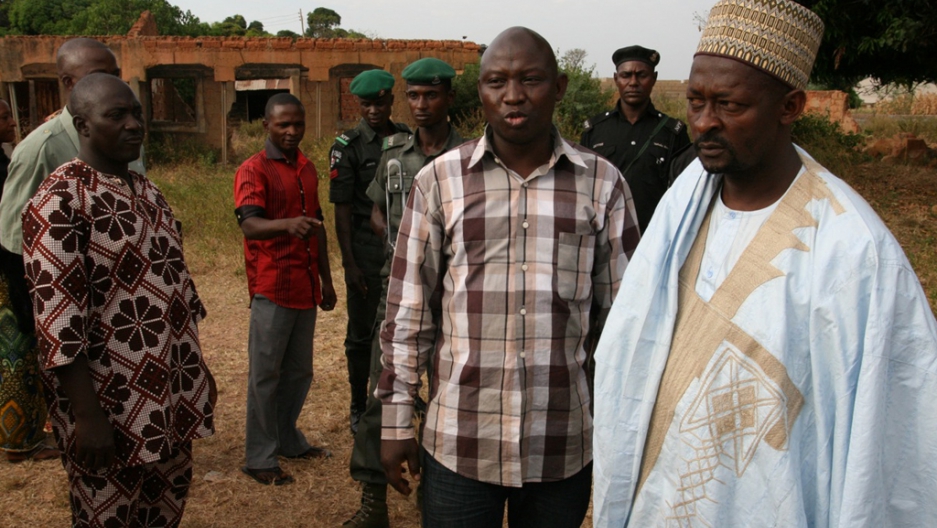 Umar Farouk Mohammed, of Kaduna's Interfaith Mediation Center, on a site visit to Redo, a community plagued with violence between Muslims and Christians. He stands with the head of a Muslim family whose home, in the background, was set ablaze in the communal violence.
Credit: Allan Leonard
Share

At the close of an inspiring week of shared perspectives at a six-day International Forum for Cities in Transition, delegates from around the world packed their bags and headed back to their own divided societies while Nigeria’s Sunday newspapers told of the mounting violence that continues apace.

And right below that story was another dateline of communal violence and another blaring headline: “BOKO HARAM: 5 sect members, 2 soldiers die in Kano raid.”

That made for a total of 42 deaths in Nigeria on the day the peace conference ended, and brought frightening clarity to the enormous challenges ahead.

How Nigeria can bring this violence under control and find a path toward reconciliation was the work of the unique gathering here last week, which marked the fourth annual International Forum for Cities in Transition.

Organized by the University of Massachusetts Boston, the conference brought together some 50 delegates from divided cities in Lebanon, Kosovo, Bosnia, Iraq, Northern Ireland, Israel-Palestine and elsewhere.

The delegates came with practical lessons they’ve learned in helping their own cities reach out across sectarian and religious divides to find workable systems of governance, policing and education. The idea is for these municipal leaders to meet and share their stories and to learn from each other.

The city of Kaduna, a river town divided by a predominantly Christian community to the south and a Muslim community to the north, hosted the conference and has earned a reputation as a vanguard in efforts at reconciling the Christian and Muslim sides of the community.

While the wider conflict in northern Nigeria is largely defined along a Christian–Muslim divide, there are also reverberations of a struggle over land rights, indigenous versus settler communities, and economic inequities.

Fueling the conflict is a notoriously corrupt government elite that many feel exploits the religious tensions for its own gain; an unhinged military that is being questioned for either incompetence or complicity; and a ruinous economy that leaves 90 percent of the country living on less than $2 per day.

Out of this vast landscape of political cynicism and economic despair, local activists here say that recruits to the Boko Haram Islamic militant group are legion and the invitation to young Christian and Muslim to take up deadly street clashes seems endless.

Over the last 20 years, communal strife has killed more than 20,000 people, according to UN figures. Since 2009, when the feared Boko Haram unleashed a terrorist campaign targeting churches, Western organizations and police stations, the numbers of casualties has been rising steadily.

Boko Haram, roughly translated from a mix of local dialect and Arabic, means, “Western education is forbidden.” It is an Islamist insurgency in northern Nigeria that is part of a metastasizing of al Qaeda-inspired movements across Africa, including Somalia, Mali, Yemen and Chad.

When Boko Haram targets Christians, as it did with a car bomb that rocked the Shalom Church here in Kaduna in June 2012, it knows it can ignite much wider violence. The car bomb killed only three people, a relatively small number in the bloodletting that is taking place. But Boko Haram’s strategy for that blast wave of violence to reverberate far beyond the single bombing seems to work every time.

Immediately following the June 2012 bombing, Christian street gangs burned Muslim homes and shops and torched a mosque up the road.

That violence rippled further into the night and the following two days as small Christian and Muslim armies of youths, known as “Area Boys,” often fueled by drugs, squared off and killed each other with knives, clubs, and crudely fashioned weapons made of farming tools and cut glass.

When this street violence boils, the Nigerian military moves in and, critics say, too often fires indiscriminately, killing even more people. In the 48 hours that followed the Shalom Church bombing, more than 140 people were killed, according to local authorities.

How to stop these rampages was the business of the peace forum, and it brought together some of the Muslim and Christian leaders — political and religious — who are working together in these communities.

Their goal is to connect with the youths on both sides of the divide and find “early warning systems” that can control rumors and exaggerations that spread rapidly by cell phone and on radio broadcasts, too often touching off violence. Their goal is to know the wiring of each community so they can short circuit the explosions of violence before they happen.

As the delegates headed off to the airports at the end of the conference, I followed two of these leaders from Kaduna’s Interfaith Mediation Center out into the field.

Umar Farouk Mohammed, who is Muslim, and Sampson Auta, a Christian, work together as a team and on Saturday, they pulled together a town meeting to hear about a spike of violence in the community that had come to their attention.

In an old van with bad shock absorbers, they bumped down potholed roads to Kafanchan and a dusty town common where Muslim and Christian clerics from the community were gathered along with families that had recently lost loved ones and/or property in the violence.

Their stories were painful and difficult to hear — about loved ones savagely beaten and left for dead just for straying into the wrong side of the divide. There were stories of homes and shops burned to the ground, leaving families more destitute than they already were. Mohammed and Auta listened carefully and nodded in understanding.

One of the truth tellers at this meeting was Teresa Akwashiki, who works with a psychological counseling center and who lost her nephew in the violence. She said the key to reversing it was providing jobs for youths.

Nigeria has a youth unemployment rate that has been estimated to be as high as 70 precent, and so there is much work to do on that front. She also said fighting a scourge of drug use among youth was urgent. But most of all, she said, the community had to find a way to lift itself up out of a culture of fear that envelops the community.

“We are all living in fear every day. And it is fear that is giving room for this violence to grow,” she said. “With fear consuming everything around us, we won’t go far.”

Auta and Mohammed ended the meeting with new contacts in the community, and what they hoped would be a wider constituency for their long and arduous campaign to reduce violence.

On the way back to Kaduna, they said that they felt renewed in their efforts, and now part of a global network of divided cities like their own that have seen the impact this kind of hard, daily work can have.

At dusk, the bus headed back out through the potholes and the tense military checkpoints back to Kaduna. Along the way Umar Farouk Mohammed observed, “We have a lot of work to do. But we did well today. I think we have some new allies who will help us.”

As night closed in, we all squinted into the headlights of oncoming traffic along a narrow, treacherous road. Mohammed tried to sleep along the way. He knew that the following day, he and his partner Auta had another meeting of young people and a chance to build more allies on the long road ahead.