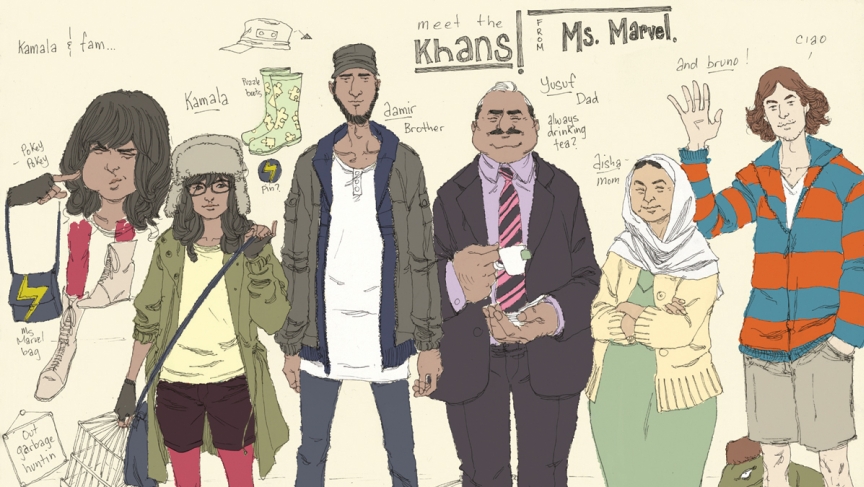 Who are some of the first superheroes that come to your mind? Superman, Spiderman, Batman, the Hulk, Ironman, Captain America... and what do they have in common? They're all white dudes.

Comic companies are trying to diversify their superhero ranks. There have been non-white characters, and even a few Muslim heros.

Marvel Comics announced this week a new superhero comic book series featuring Kamala Khan: a Muslim, Pakistani 16-year-old who lives in New Jersey. She'll be taking on the name of Ms. Marvel, after the former Ms. Marvel, who is now going by Captain Marvel.

"We've had many diverse characters at Marvel," said Sana Amanat. "But nobody at the forefront, on this scale."

Amanat is one of the editors who came up with the idea for Kamala Khan. It sprung from a conversation she had with a senior editor, Stephen Wacker. Amanat told a few anecdotes about growing up as a Pakistani Muslim in Jersey.

"In the town that I grew up in, there weren't many people who looked like me or who had my background," Amanat said. "In different ways, not only in terms of me being Muslim or Pakistani, but just in terms of my personality and how my family was."

This gave Wacker an idea. He asked, "Wouldn't it be nice if we had a superhero for all those girls that are growing up the way that you did?" Amanat recalled.

They reached out to G. Willow Wilson, a comic book writer in Seattle who converted to Islam 10 years ago. Once Wilson was on board, Amanat and Wacker pitched the idea for Kamala Khan to the Marvel creative committee.

Kamala Khan's story involves her struggle to figure out who she is, while dealing with the discovery of her superpowers. She's a polymorph, which means she can shrink, grow, and shape shift.

"We wanted to stay away from typically girly superpowers — things that sparkle, moving things with you mind, floating in the air," Wilson said. "We wanted to give her something more physical, a little bit more unexpected."

Though Kamala Khan is Muslim, that's not the central theme of the series, Amanat says it's just one factor in who she is.

"I don't think I necessarily wanted this to be about religion at all," Amanat said. "That's just one aspect of who she is. It forms one piece of her identity."

Shelina Janmohamed, a Muslim author in London, was excited to learn about Marvel’s new series. She wrote an opinion piece for The Telegraph entitled “Hallelujah! Even Muslim women can now be superheroes.”

“I really wish for my own sake that I’d had a superhero like Kamala Khan to try and help me make sense of angst,” Janmohamed said. “And just once in a while to come out of that geeky, angsty, slightly awkward teenage phase and see that I, too, could be some kind of superhero.”

Amanat says Marvel hopes to attract readers who may relate to Kamala Khan’s struggles and background.

“I’ve got nieces and I’ve got nephews, and for them to look out into the landscape of pop culture and see versions of themselves … I think that will make them feel a little more comfortable in their own skin,” she said.

Janmohamed said she has never read comic books before, but she’s planning on picking up this one when the first installment hits shelves in February, 2014.

"I think they've done something very savvy in terms of business,” she said. “But also, they've made a very interesting social development.”