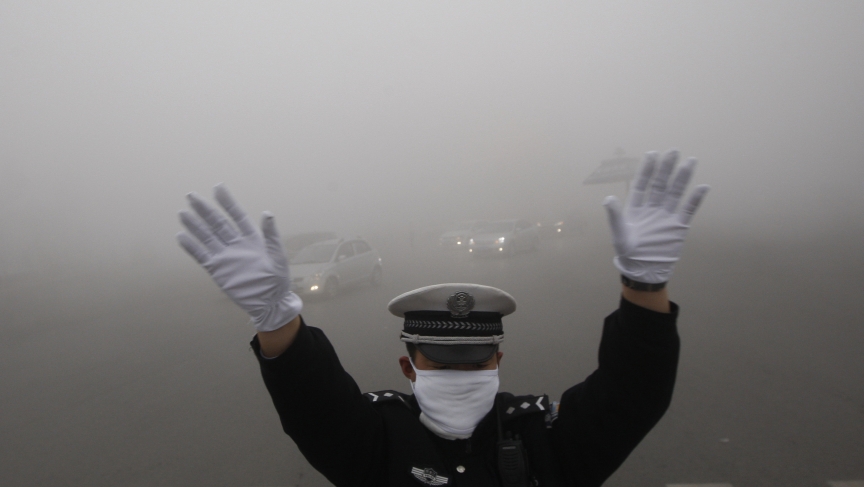 A traffic policeman signals to drivers during a smoggy day in Harbin, China, in late October. The second day of heavy smog with a PM 2.5 index forced the closure of schools and highways, according to Xinhua News Agency.

Visitors to China quickly learn a fact of life that millions of Chinese confront every day: the air in many of the country’s cities is often terrible. Deadly, even.

Until recently, the Chinese government was loathe to acknowledge this, and extremely slow to do anything about it.

“The Chinese government has done a ‘180’ on this,” Bell says. “When the U.S. embassy here in Beijing started monitoring air pollution, and then putting that information out on Twitter a couple of years ago, the government took offense. They basically said Washington is taking a political cheap shot at China.

“But now, China’s environment ministry has its own monitoring program, and they put that information out [themselves]. It’s generally considered to be well-run [and to provide] accurate data.”

Bell says the biggest factor behind the change has likely been the recent episodes of what he calls “unbelievably shocking” air pollution. One happened just last month, in the northern city of Harbin, where he says the smog got so bad, you couldn’t see halfway across the street, closing schools and the city’s airport.

Something very similar happened earlier this year in the capital Beijing, Bell says, and “the public is more concerned than ever.”

Hilton told him, “There was a time, maybe ten years ago, when people were almost proud of smog because it meant ‘we’re industrializing, we’re becoming a real country, we have the problems of modernity rather than the problems of the middle ages.’ So this was regarded as progress."

But, Hilton said, “that moment has definitely passed, and these very serious episodes have brought terrific pressure on the government. If you are the only power, you also are the only people to blame, and they know that.”

Bell says the government is doing more than talking about the problem. In September, it announced targets to reduce coal consumption and has also been investing in alternative energy, public transportation, electric cars, and the like.

But, he says, “environmentalists will probably tell you that it’s not enough, because again, the problem gets back to coal. That’s the real fundamental issue here, and they say that China is not being ambitious enough” in its plans to reduce coal use.

Bell says that’s largely because the model of economic growth that China adopted 30 years ago has been dependent on cheap, plentiful energy, in the form of coal.

“So if they’re going to go in a different direction, that’s a fundamental shift, and it’s not going to be solved quickly.”

Meanwhile, chronic air pollution problems are flaring up again this week in Tehran.

Schools in the Iranian capital are closed for three days and government agencies have been ordered to shorten their hours, as the city suffers through its latest bout of crippling smog.

Efforts to tackle the problem in recent years have largely failed.

You can see photos of Tehran's nasty air on the BBC's Persian Service Facebook page.