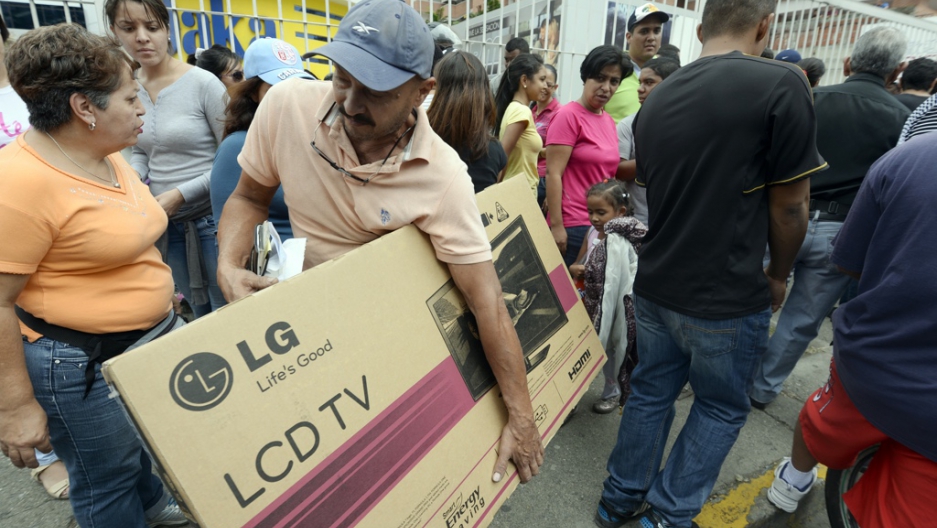 Shoppers loaded with purchases leave a Daka store in Caracas on Nov. 9, 2013. Venezuelan President Nicolas Maduro on Friday ordered the "occupation" of a chain of appliance stores accused of raising the prices of their items, so they will be sold "at a fair price."
Credit: Juan Barretto
Share

CARACAS, Venezuela — In his fight against the “economic war” he says the political opposition, in collusion with the United States, is waging against Venezuela, President Nicolas Maduro ordered the military occupation of electronics chains over the weekend and summoned the public to come shop at government-enforced “fair” prices.

The orders against Daka, KVG and Krash, which are basically Venezuelan equivalents of Best Buy, sparked chaos at the stores’ outlets. The authorities arrested five store managers and said they will be prosecuted for unjustifiably raising prices.

Thousands lined up outside the chains’ stores hoping to buy cut-price plasma televisions or appliances such as fridges, washing machines and sewing machines.

Pictures shared on social media as well as local newspaper reports said that one store in the country’s central city of Valencia faced looting. Some critics suggested that the entire operation was a form of looting organized by the government, just in time for municipal elections in December.

The government said five people are under arrest in the north-central Venezuelan city of Valencia for looting a Daka store.

Some critics suggested the entire operation was a form of looting organized by the government, just in time for municipal elections in December.

“This is for the good of the nation,” Maduro said on state television. “Leave nothing on the shelves, nothing in the warehouses … Let nothing remain in stock!”

Venezuela’s economy is in a tailspin. Annual inflation is at 54.3 percent and the severe shortage of dollars has created a black market where the greenback sells at nearly 10 times its official value. The dollar shortage has also caused a lack of basic products, such as toilet paper, chicken and cooking oil.

As a result, the popularity of Maduro, who came to power in April following the death of long-time leader Hugo Chavez, has plummeted. Analysts are expecting upcoming municipal elections to be a referendum on his leadership.

Critics blame the dire economy on government currency controls enacted by Chavez a decade ago to prevent capital flight. The government, meanwhile, blames what it calls an “economic war” being waged by the opposition, with help from Washington.

On Sunday night, Maduro added that food, vehicle and hardware businesses would be targeted this week in similar fair-price operations.

Head of the High Commission for the People’s Defence of the Economy Hebert Garcia Plaza attempted to explain the government’s decision to take over Daka on state television on Friday, accusing the chain of unfair markups.

Local economist Jose Guerra, a former Central Bank official, was critical of not just the events at Daka but the bigger picture. “Food today, hunger tomorrow,” he wrote on Twitter.

Venezuela’s opposition leader, Henrique Capriles, has long blamed the government for the state of the country’s economy. On Saturday, he tweeted: “Everything Maduro does leads to further destruction of the economy.”

“Today it’s Daka. Tomorrow it’ll be the banks where you save your money,” tweeted Maria G. Colmenares, a professor at a local university.

Oscar Diaz resorted to sarcasm to make his point: “Daka had flour, sugar, milk and other basics. The shortage is over! Ah sorry, they sell [appliances]! Oops.”