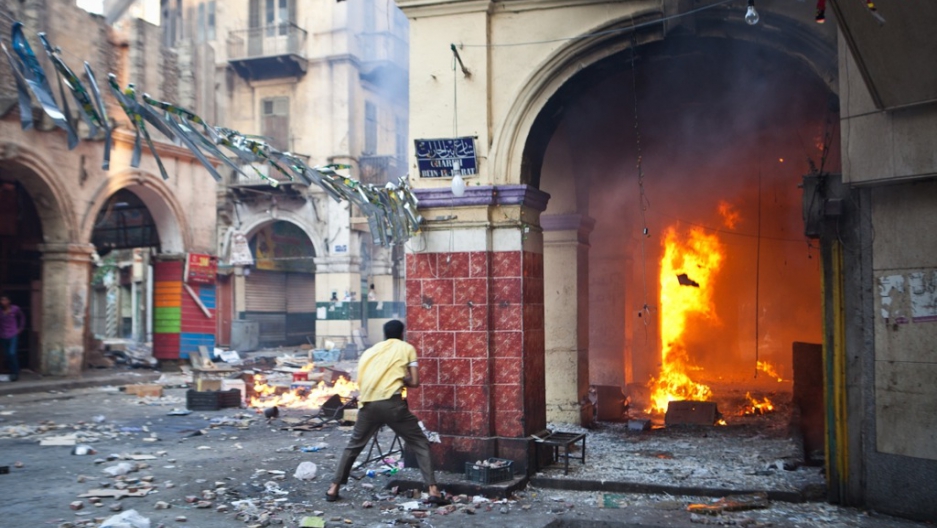 CAIRO, Egypt — Less than a month after Egypt publicly condemned an American decision to suspend portions of its annual military aid package, relations between the allies are back on track.

Egypt’s foreign ministry announced Wednesday that Cairo now expects an “intense period” of diplomatic visits from Washington. Despite the public frostiness that hung over the alliance just a few weeks ago, analysts say the relationship below the rhetoric remains strong.

The US has struggled to manage relations with Egypt in recent months, following a July 3 popular coup that pushed former President Mohamed Morsi from office.

According to Human Rights Watch, Egypt’s security forces should now be investigated for the deaths of more than 1,300 people in the months that followed. Most of the dead had been participating in mass rallies in support of the ousted leader.

Washington has long been one of Egypt’s biggest financial supporters, committed to an annual aid package of $1.5 billion. $1.3 billion of that is military aid. But in early October, the State Department announced that it would be suspending deliveries of tanks, fighter aircraft, helicopters and missiles, as well as $260 million in cash assistance to the government, “pending credible progress toward an inclusive, democratically elected civilian government.”

Egypt’s initial response was one of consternation.

A statement from the cabinet described the decision as strange, coming at atime when the country was "facing a war against terrorism." As well as leading a crackdown on Morsi’s rank and file supporters, the Egyptian army has renewed military operations against Al Qaeda-affiliated militants in the Sinai peninsula.

But Egypt is now keen to play down the rift. Presidential spokesman Ihab Badawi said Friday that the bilateral relationship remains important to Egypt, adding that this month’s fresh wave of diplomatic visits will “confirm a transformation in relations.”

The US has also made efforts to smooth the divide.

“The United States is a friend to the people of Egypt, of the country of Egypt, and we are a partner,” Secretary of State John Kerry told a news conference during an unannounced visit to Cairo last week.

Sharing a platform with Egyptian foreign minister Nabil Fahmy, the secretary of state played down the US suspension of aid, denying the decision had been intended to punish Egypt's military leaders and describing it as "a very small issue between us."

A separate congressional delegation is now in Egypt, the first of several expected in the coming months. The delegation, led by Foreign Operations Subcommittee chief Anne Marie Chotvacs, is reported to have signaled its disagreement with the October decision to suspend a portion of Egypt’s military aid.

Despite the high profile aid cut, “the message [now] is that everything is okay,” said Zack Gold, an independent Middle East analyst whose research focuses on Egypt-US relations. “The main point is that there is still a relationship under the rhetoric. The Egyptian authorities understand that they need to make vocal pronouncements against the US in order to satisfy their constituents, but everyone is working together behind the scenes.”

While the cooling of relations had caused the interim authorities to look elsewhere for funding — notably by cultivating ties with the Gulf states and Russia — recent Egyptian efforts to win support on Capitol Hill suggest that Egypt’s current leadership still sees American support as a crucial tool in their arsenal.

Cairo has now called upon the services of DC lobbying firm Glover Park Group. According to its contract, signed days after the aid suspension, the firm “will act as an advisor … on communications and government relations matters.”

And they appear to have been busy. Washington insiders describe several meetings and receptions involving Egypt’s new representatives on the Hill. The Arab world’s most populous nation is also reportedly close to finalizing a deal with a high profile DC-based PR firm.

This strategy appears to be working, and Abdelatty now points to a “strong will on both sides to preserve a relationship based on mutual interests.”

That mutual interest is critical. For the Americans, Egypt’s cooperation is vital to maintaining both regional and international security. Not only is it a key player in maintaining relative stability between Israel and the Palestinian territories, but its ongoing efforts in the restive Sinai peninsula are seen as furthering America’s own national security interests.

For Egypt, it was US military cooperation that allowed the country to re-emerge as a key regional actor. Egypt has modernized its armed forces using US equipment, and has updated its military doctrine and training routines with the help of American programs.

But as the two governments reaffirm the strength of their relationship, Gold suggests that the US foreign policy approach to Egypt has shifted focus.

Although democratization — a chief US goal at the start of the Arab Spring — remains important, he says, now the top priorities are stability and economic prosperity.

Democratization is now seen as a means to achieve these, rather than as an end in itself.