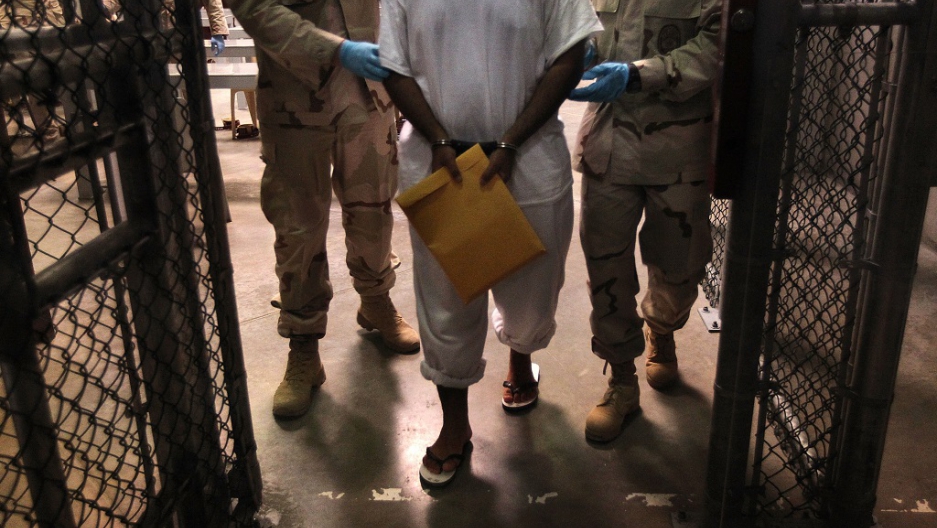 U.S. Navy guards escort a detainee after a 'life skills' class held for prisoners at Camp 6 in the Guantanamo Bay detention center on March 30, 2010 in Guantanamo Bay, Cuba. U.S. President Barack Obama pledged to close the facility by early 2010 but has struggled to transfer, try or release the remaining detainees from the facility, located on the U.S. Naval Base at Guantanamo Bay, Cuba.
Credit: John Moore
Share

Yemeni government officials and the Obama administration are mulling the construction of a secure facility in Yemen to house over 80 detainees currently being held at the US naval base in Guantanamo Bay, Cuba, US and Yemeni officials told the Los Angeles Times on Wednesday.

A Yemeni official has since confirmed to GlobalPost that the talks are taking place.

According to the LA Times, the proposed facility outside Sana’a would house Yemeni nationals, who make up over half of the prisoners held at Guantanamo Bay. The White House refused to confirm the report on Thursday.

President Barack Obama campaigned in 2008 on the promise of closing Guantanamo. But nearly a year into his second term, the facility is still home to 164 detainees. After several false starts toward shuttering Guantanamo, Obama earlier this year lifted a moratorium on the transfer of detainees to Yemen, a promising sign for those advocating closure.

The prolonged detention of Yemeni nationals has strained the otherwise amicable relationship between Sana’a and Washington. Some of the detainees at Guantanamo, several of whom have been held for more than a decade, have yet to be convicted of any crime. Yemeni President Abd Rabo Mansur Hadi has expressed a strong desire for their return, downplaying the concerns of US lawmakers that prisoners may engage in terrorism again upon release.

“We believe that keeping someone in detention for over ten years without due process is clear-cut tyranny,” President Hadi said in an interview last April.

“The United States is fond of talking democracy and human rights. But when we were discussing the prisoner issue with the American justice secretary, he had nothing to say,” he added.

According to the LA Times, officials involved in the current talks disagree over whether the facility should function "as another prison or as a halfway house."

Contacted by GlobalPost on Thursday, a Yemeni official expressed concern that both a divided US Congress and a deteriorating security situation inside Yemen will threaten the new deal for what he called a "secure rehabilitation facility."

“We are still months behind having the rehabilitation center up and running," said the official, who is not authorized to speak to the press.

"The [Yemeni] government understands that security and stability [in Yemen] will play a key role in convincing the divided Congress to support the administration’s bid to transfer detainees to Yemen," the official added.

A large number of Yemenis agree with their president — and plenty of Americans — that the prolonged detention of individuals without charge is unjust. Mistrust of the US government has also grown in recent years because of the Obama administration’s use of drone strikes in Yemen as part of its counterterrorism strategy.

Many Yemenis are wary of American intentions in building the Sana'a facility. But in spite of strained relations, the talks represent welcome progress after a long period of official mistrust.

“The talks are a great sign that the US and Yemen are holding serious discussions about jump-starting the return of detainees to their homes," Letta Taylor, senior terrorism and counterterrorism researcher at Human Rights Watch, told GlobalPost. "Yemenis make up the largest block of the detainees and there is no solution to the Guantanamo problem without a solution for Yemeni detainees, many of whom have been detained for over a decade without charge.”

Like officials involved in the talks, Taylor expressed concern over the implementation of the reintegration program for Yemeni detainees. In order to avoid creating a “Guantanamo with window dressing,” Taylor stressed the need for effective, voluntary rehabilitation.

"Rehabilitation must include programs that work to reintroduce detainees into Yemeni society — they need job training, psychological counseling, medical care and other tools necessary to rebuild their lives,” Taylor said.

Asked about the proposal for a secure facility in Sana'a, some Yemenis are quick to point out the government's weakness in providing security. The authorities have routinely been incapable of securing electricity and oil infrastructure from bandit attacks — a far cry from what would be needed to manage the delicate rehabilitation process of Guantanamo detainees. Prison escapes have been a major, long-standing problem.

"The US should consider recent prison breaks occurring directly under the nose of intelligence organizations and local government officials alike,” said Shuaib al-Mosawa, a prominent Yemeni journalist and former editor-in-chief of the English-language Yemen Observer.

“What needs rehabilitation right now is the Yemeni government.”