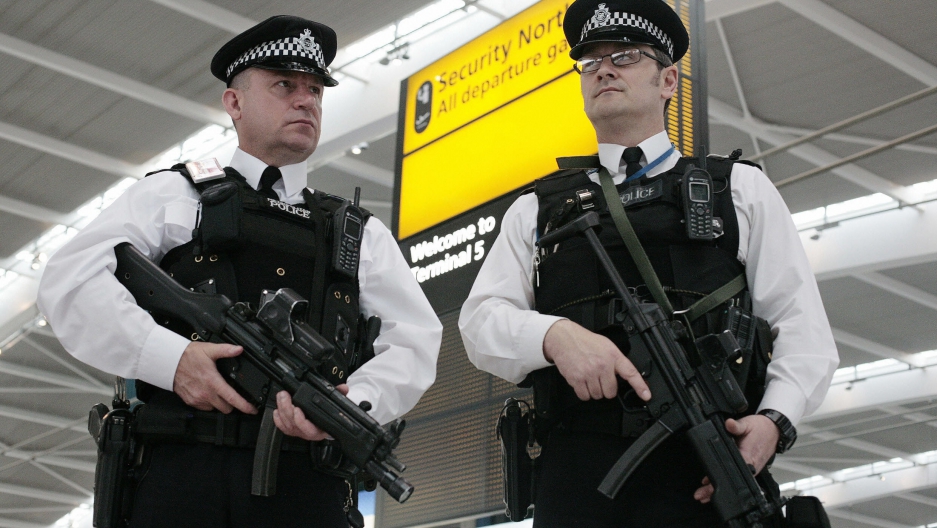 Rights groups are questioning the authorities' wide powers to detain people at airports and other ports of entry.
Credit: Shaun Curry
Share

Known as Schedule 7, the curious but wide-ranging legal provision enables the authorities to stop virtually anyone at British ports of entry for up to nine hours with no evidence or even suspicion of involvement in crime.

For many individuals subjected to the regulation, however, an airport interrogation is just the beginning of a series of strange encounters with the security forces.

British intelligence agencies are using such stops to recruit young Muslim men as informants, GlobalPost has learned through conversations with lawyers, human rights groups and individuals stopped under Schedule 7.

They have reported follow-up phone calls and visits to their homes, workplaces and neighborhoods by security agents asking them to provide information about others, or to carry out work on their behalf.

Ahmed, who requested his real name not be used for this report, was stopped for the first time in 2006, when he was returning home from a trip to Jordan to study Arabic. Pulled aside by four men in suits as he debarked his plane, the native Londoner was questioned for nine hours about his travel history, family and mosque.

The interrogators, who identified themselves as agents from the domestic security agency MI5, and the national security police Special Branch took fingerprints, photographs and an oral swab. They searched his luggage, confiscating his novice-level Arabic textbooks and language-class notebooks.

“The psychology of the whole thing — it’s humiliating, it’s aggressive,” Ahmed said in an East London accent. “They try to make you feel as small as possible, that you’re a criminal.”

A provision of the sweeping Terrorism Act of 2000, Schedule 7 gives the authorities broad powers during such detentions. Property may be confiscated for up to seven days. Any information on cellphones, computers or other electronic devices may be downloaded and the copies kept. Refusing to answer questions can be considered a criminal offense.

Alice Wyss of Amnesty International, one of several rights groups calling for a review of the regulation, describes its powers as “intrusive.”

“Drawn so broadly,” she says, “you can see the consequences for individuals who are caught up in them.”

Ahmed says that during his detention, he was asked to consider “helping us out.” Overwhelmed and sleep-deprived, he thought little of it.

A few months later, he was detained at another airport. This time, the MI5 agent was more direct.

“There’s a lot of ways that we can help each other,” Ahmed recalled him as saying. The agent handed him a card with a phone number.

Ahmed says he was asked to inform on other Muslims in which the agency had an interest. He was told the number would connect to an operator who would identify himself as a taxi dispatcher. Ahmed would ask for the agent by name before being connected.

Ahmed insists he’s never been involved in terrorism or extremism. He credits Islam with turning around his life after his wayward youth in one of London’s poorest and roughest neighborhoods.

“If I know of a crime, I’ll be duty-bound to stop that crime,” he said.

However, he says he has no intention of naming others.

“You know that from the streets,” he said. “You don’t answer about other people.”

The agent was more difficult to dismiss than his offer. He began calling Ahmed’s parents’ home, where he was living at the time. When Ahmed was out one day, the agent and a Special Branch officer visited the house to ask for him.

On a Sunday morning soon after, a motorcycle courier pulled up to the family home. Knocking on the door, he handed Ahmed’s father a package wrapped in brown paper, with Ahmed’s name printed on an address label.

When Ahmed opened the package, he found a box containing a brand new Nokia cell phone and a note: “Switch on.” He did. A single number was programmed into its address book — the phone number he was given at the airport.

Shortly after, Ahmed was returning home from a pilgrimage to Mecca with his family when he was stopped again for five hours of questioning. This time, agents also detained his mother. That was a step too far, he says.

The next day, he called a civil rights lawyer. Before they could file a case in court, however, the phone calls, visits, suspicious packages and airport detentions immediately stopped. Ahmed believes that’s because his phone was being monitored.

Unlike the detentions, during which refusing to answer questions is illegal, people aren’t obliged to cooperate on subsequent visits, she said, although “obviously when one has information regarding individuals involved in terrorism, we’d encourage them to share that.”

Some campaigners see the interrogations differently.

“They use the existing climate of fear regarding terrorism to take advantage of people,” says Asim Qureshi of CagePrisoners, a group that works with people affected by the war on terror.

Being confronted at one’s home and pressured to provide information without the presence of a lawyer or clear statement of rights is threatening, he adds.

“It has to be done with due process of the law,” he says. “Otherwise people often get intimidated into saying things they wouldn’t otherwise have said or even believe.”

More from GlobalPost: Spain: Friendship amid the Basque conflict

Multiple reports about the campaigns to recruit young Muslims as informers have surfaced over the years.

In 2009, five young Muslim men told the Independent newspaper they’d been pressured to work for MI5.

One of them, a community worker named Mahdi Hashi, was later taken into custody and stripped of his British citizenship while visiting family in Somalia. He surfaced last December in a US court, where he faces terrorism charges he denies.

Michael Adebolajo, a suspect in the fatal stabbing of soldier Lee Rigby in London last May, was also recruited by MI5 months before the attack, a friend of his told the BBC. His trial is set to begin this month.

Ahmed likened the frequent stops of young Muslim men to police stops of young black men in the United States. His encounters with security forces made him feel persecuted for his religion, a feeling he believes others in his community share.

“You keep hitting someone with a stick,” he says, “he’s gonna turn around and hit you one day.”