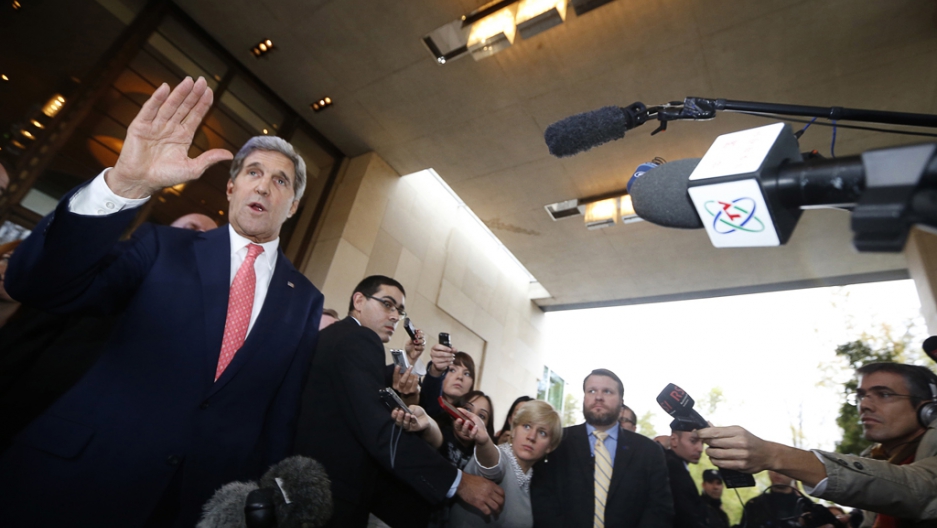 US Secretary of State John Kerry speaks to the press upon his arrival in Geneva on November 8, 2013.
Credit: AFP
Share

JERUSALEM — Western powers appear to be close to an interim agreement on curtailing Iran's uranium enrichment in exchange for an undefined reduction in the sanctions that have crippled Iran's economy.

The world's foreign ministers converged upon Geneva, where the talks are being held.

Yukiya Amano, the head of the International Atomic Energy Agency, will arrive in Tehran on Monday "to strengthen the dialogue."

But despite the diplomatic frenzy, significant gaps remain on various fronts. Upon landing, Kerry underscored the fact that "there is not an agreement at this point."

No details have been disclosed. But it is being widely reported that the deal would include a freeze on Iranian uranium enrichment — but not the dismantlement of nuclear facilities — in exchange for the loosening of sanctions.

But the United States faces considerable pushback from a number of traditional allies, among them the unlikely duo of Israel and Saudi Arabia, both of which are threatened by Iran's nuclear ambitions.

The Israeli government in particular seemed taken aback, even "shocked," in the words of Channel 10 political analyst Raviv Drucker, by whatever message Kerry delivered in an unscheduled meeting he held with Israel's Prime Minster Benjamin Netanyahu.

In brief, unusually caustic comments made before and after the meeting, Netanyahu said the possible deal was an "historic mistake."

"I understand that the Iranians are walking around very satisfied in Geneva, as well they should be, because they got everything, and paid nothing, they wanted," Netanyahu said.

"They wanted relief from sanctions after years of a grueling sanctions regime," Netanyahu added. "They got that. They are paying nothing because they are not reducing in any way their nuclear enrichment capability. So Iran got the deal of the century and the international community got a bad deal. This is a very bad deal. Israel utterly rejects it and what I am saying is shared by many, many in the region whether or not they express it publicly."

"He feels tricked," a senior Israeli official told GlobalPost, confirming the commentaries of most political observers.

"From his point of view, what's going on is outrageous," the official added. “What he understands is that they are giving the Iranians quite a lot, and in exchange the Iranians give nothing. He sees the destruction of years of effort in building the sanctions regimen that finally brought Iran to this point — and who's conceding? The West is. And for what? For nothing. No reversal, only a freeze. And from a guy who is on the record boasting about how he tricked the West."

The official was referring to widely disseminated comments made by Iranian President Hassan Rouhani when he was Iran's chief negotiator on the nuclear issue, in which he said: "When we were negotiating with the Europeans in Tehran we were still installing some of the equipment at the Isfahan site. There was plenty of work to be done to complete the site and finish the work there. In reality, by creating a tame situation, we could finish Isfahan."

A White House spokesman said Israeli criticism was "premature," adding "there is no deal."

In an interview published this week US Defense Secretary Chuck Hagel conceded that the sanctions Netanyahu advocated for over a decade, often in opposition to the American and European positions, had borne fruit.

"And I think that Iran is responding to the constant pressure from Israel, knowing that Israel believes them to be an existential threat. I think all of this, combined, probably brought the Iranians to where we are today. Whether the Iranians will carry forth on that, we’ll see."

Iran has said publicly it hopes to have sanctions lifted on its banking sector and oil industry even under an initial, interim agreement.

Meir Javdanfar, a leading Israel-based expert on Iran, said, "Netanyahu's concern is based on the fact that in the past Iran has lied about its nuclear program. It hid the sites at Fordow and at Natntaz until they were exposed."

Still, he added, Netanyahu's uncommonly blunt comments exposed the "very bad chemistry" between him and the Obama administration.

"I think it is about to get about to get much worse. Netanyahu doesn't trust Kerry over the Palestinian issue and this is reflected now in his reaction to what may be happening with Iran."

The US Secretary of State and Netanyahu publicly bickered this week, with Kerry criticizing Israel's ongoing building in the West Bank.

In an interview with Israeli and Palestinian television, Kerry warned that "if we do not resolve the question of settlements, and the question of who lives where and how and what rights they have. If we don’t end the presence of Israeli soldiers perpetually within the West Bank, then there will be an increasing feeling that if we cannot get peace with a leadership that is committed to non-violence, you may wind up with leadership that is committed to violence."

But Kerry's muted response to Netanyahu's outburst suggested another possibility, in which the two leaders may be playing the roles of good cop-bad cop on the issue of Iran, which both view as a rogue state.

"It works for both sides," the Israeli official told GlobalPost, while admitting he had no evidence of this strategy.

"It's very convenient for Kerry to land in Geneva when he can point at Netanyahu and say 'Look, I have to take my allies into account. My hands are tied.' They've done it before."