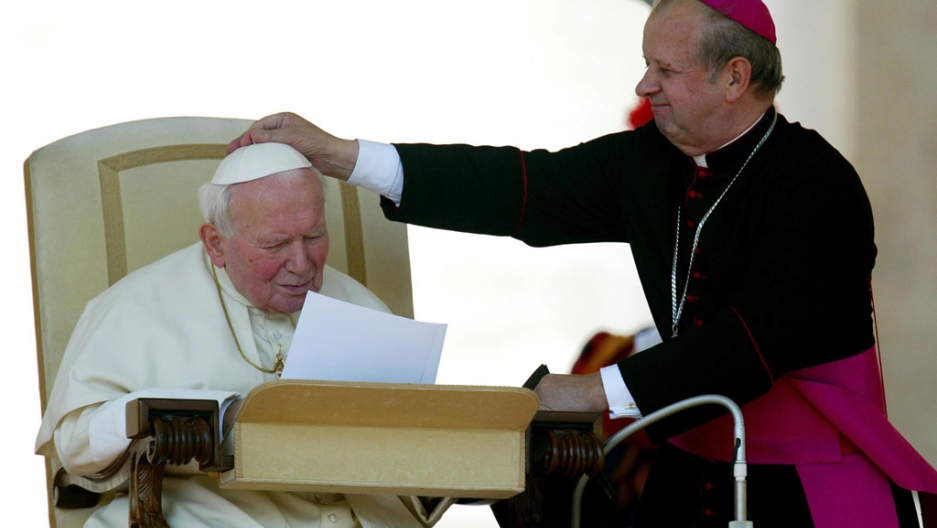 In a new book, John Paul II’s longtime secretary claims that the former pope is not to blame for his support and praise of a disgraced power broker accused of pedophilia and bribery, according to a Catholic News Service report.

Pope Francis has ordered the canonization of John Paul II despite his failure to act on 1998 pedophilia charges lodged by nine ex-seminarians at the Vatican against Legion of Christ founder Father Marcial Maciel Degollado, a native of Mexico.

During a 1993 speech in St. Peter’s Square, John Paul said, “You are all sons and daughters of Father Maciel!” In 1994, he called Maciel “an efficacious guide to youth.” John Paul continued to praise him after the allegations were filed against Maciel at the Vatican's Congregation for the Doctrine of the Faith — where they gathered dust for six years.

“When the Holy Father met him, he knew nothing, absolutely nothing,” Catholic News Service quotes Dziwisz. “For him, [Maciel] was still the founder of a great religious order and that’s it. No one had told him anything, not even about the rumors going around.”

Dziwisz [pronounced gee-vitch], moved to Italy from Poland as a young monsignor and lived in the papal apartment serving as the pope’s personal secretary for nearly 40 years. He was the man literally closest to the pope on a daily basis, and the gatekeeper for the pope's guests at the private 7 a.m. Mass in the small chapel of the Apostolic Palace. People often made donations for the privilege of attending.
Catholic News Service quotes Dziwisz on why John Paul failed to act: “Unfortunately, it was the consequence of a still extremely bureaucratic structure.”

It seems all too convenient to blame the pope’s silence on the bureaucracy of the Curia. And believe that Ratzinger — who had a standing lunch with John Paul every Friday the pope was in Rome — never said word one about Maciel to John Paul? Dziwisz, now, is now making himself a victim of that "bureacratic structure."

The pope is supreme arbiter of canon law. He can reverse, change or intervene in any proceeding, like a one-man supreme court.

In late 2004, after John Paul praised Maciel yet again, Ratzinger ordered an investigation. The Legionaries had a history of channeling money to Dziwisz to arrange guests at the papal Masses.

The Legion hosted a lavish reception in Rome when Dziwisz became a cardinal in March 2006. Two months later, as Pope Benedict, Ratzinger dismissed Maciel to “a life of prayer and penitence.”

In 2010, when I was on assignment for National Catholic Reporter, two priests who had left the Legion gave me a deep look at the order’s dealings with Dziwisz.

One priest recounted that he arranged for a Mexican Legion benefactor to give Dziwisz $50,000 so his family could attend Mass in the chapel of the Apostolic Palace. "We arranged things like that," the priest said, referencing Dziwisz. Dziwisz’s 2008 memoir A Life with Karol: My Forty Year Friendship with the Man Who Became Pope says nothing of donations.

“The pope kneeling in prayer with his eyes closed, in a state of total abandonment, almost of ecstasy, [was] completely unaware of who was entering the chapel,” wrote Dziwisz. “The Holy Father attached extreme importance to the presence of the lay faithful."

The priest said that in hindsight, he regretted the $50,000 payment. A second priest had similar misgivings that I took to be a twinge of guilt.

"This happened all the time with Dziwisz," he confided. He added that Legion officials frequently visited Dziwisz. “They were welcomed. They were known within the household."

This priest gave context to the donations. As he told me for the report, “The expression is opera carita — 'We're making an offering for your works of charity.' That's the way it's done. In fact you don't know where the money's going." At that point he paused, and said, "It's an elegant way of giving a bribe."

At National Catholic Reporter we took careful steps before publication of that story; Dziwisz was by then archbishop of Krakow. My editors arranged for a Polish journalist in New York to translate my questions seeking his response to the priests’ statements and fax them to the cardinal’s press secretary. The answer came back: the cardinal “does not have time for an interview.”

But he had time to read the questions, and he understood exactly what they meant.

Maciel channeled money to other members of the Curia, including Cardinal Angelo Sodano and Cardinal Eduardo Martinez Somalo, as I reported in the NCR series and expanded on in Render unto Rome: The Secret Life of Money in the Catholic Church (2011).

Maciel bought protection from some of the most powerful men in the church to avoid being prosecuted for abusing seminarians. The exchanges could be rationalized as “a pious cause” under Vatican legal standards — charitable gifts, rather than bribes, as Nicholas Cafardi, a canonist and the dean emeritus of Duquesne University Law School told me. In theory, though, a pious cause should be reported to the vicar of Rome, whereas the Mercedes automobiles that Maciel gave to certain officials were simply gifts.

“Cardinals do have to report gifts for pious causes. If funds are given for the official's personal charity, that is not a pious cause and need not be reported," said Cafardi.

None of the cardinals responded to my interview requests at the time.

How many cardinals report their pious causes? The porous nature of money in the Vatican and the lack of accountability explain why the Roman Curia has had so many recent scandals.

"Maciel wanted to buy power," said the priest who facilitated the $50,000 to Dziwisz.

The priest left the Legion for moral reasons, he said. "It got to a breaking point for me [over] a culture of lying [within the order]. The superiors know they're lying and they know that you know," he said. "They lie about money, where it comes from, where it goes, how it's given."

The Legion of Christ has now been cleared after a Vatican investigation ordered by Benedict, following the news that Maciel fathered at least three children with two women from Mexico.

How much the Legion paid them has not been revealed. One of the sons has a lawsuit pending in Connecticut against the Legion, seeking restitution and damages.

Cardinal Velasio De Paolis, the “delegate,” or papal overseer, guided the writing of new constitutions for the order.

Here, too, Dwisiz played a role.

Maciel paid for the renovation of the Rome residence for the Argentine cardinal who was prefect of the congregation overseeing religious orders from 1976 to 1983, the late Eduardo Pironio.

"Pironio got his arm twisted to sign the Legion constitution," explained one of the priests. The constitution included the Private Vows, by which all Legionaries swore never to criticize Maciel and report any such criticism by others to Legion superiors.

It did not take a constitutional scholar to see how Maciel rewarded spying as an act of faith, and grounded his men in lockstep obedience to deflecting scrutiny of his sexual secrets.

Cardinals on the consultors' board at Congregation for Religious balked at granting approval.

Jason Berry, a religion blogger for GlobalPost, is author of Render unto Rome: The Secret Life of Money in the Catholic Church.

More from GlobalPost: The Story behind the story: Jason Berry on the Catholic Church