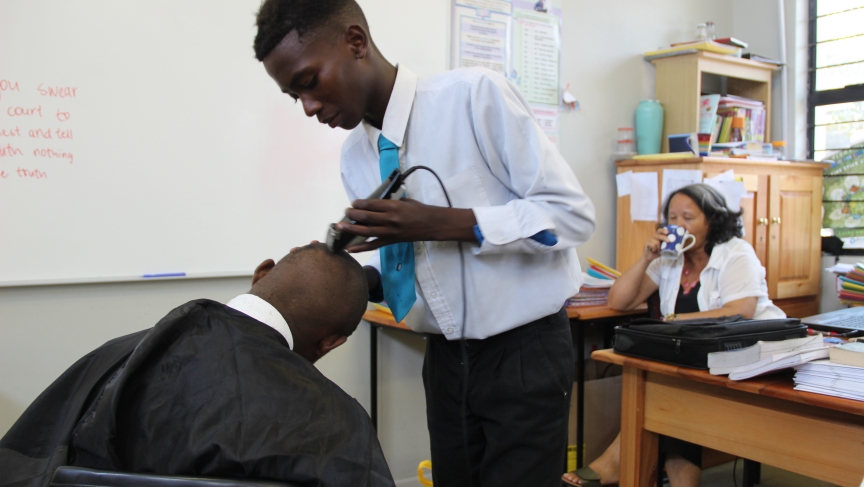 Earlier this week, I noticed something unusual at the Centre of Science and Technology (COSAT), the public high outside Cape Town that I’m following this year. There were a lot of boys with shiny, bald heads. I asked a group of ninth-graders what was going on, and they led me straight to an English teacher, Mrs. Godden.

“We’re just trying to keep to the code of conduct,” Mrs. Godden told me.

The code of conduct – the school’s dress code – doesn’t allow certain hairstyles, she said, so she and another teacher had forced some students to shave their heads. She said the real issue wasn’t hair – it was another problem that plagues this low-income township: “gangsterism.”

This school has been relatively immune to the influence of gangs, but when Mrs. Godden saw boys with what she calls “upper cuts” (what Americans might call flattops), she got worried, because she thought that was a “gangster hairstyle.”

Mrs. Godden felt she had to take action, and shaving heads was a first step.

“It creates the idea with the kids that they cannot come with street culture into the school.”

She added that she wasn’t just telling kids to cut their hair – she was making them do it, right here.

I stepped into her classroom, which looked like it had been converted into a barbershop. One student was shaving another’s head, while several more watched and waited. There was hair everywhere.

A ninth-grader named Phambili was having his hair buzzed. I asked how he felt about it.

“Very, very, very angry,” Phambili said. He said he thought he would look ugly without hair – and he was scared that girls wouldn’t be attracted to him anymore.

At first, I didn’t have that much sympathy for Phambili and the others. After all, they had violated school rules, right?

But then I heard a different side of the story.

Lukhanyo, a junior, said the school’s dress code doesn’t say anything about hairstyles. It just says students must have their “natural hair” – meaning no wigs or hair extensions. Lukhanyo said he didn’t understand why flattops suddenly weren’t allowed.

“In our townships, we normally do this kind of [hair]cut,” he said. “So we don’t get why it is suddenly wrong.”

I asked him and the other boys if there were gangs at COSAT, and if “upper cuts” were a gangster hairstyle. They laughed and said no – the teachers were misreading the situation.

Mrs. Godden walked into the room, put her hand on one of the boys’ shoulders, and told me they were enjoying this process. She said the boys knew she was making them do this because she cared for them.

I asked her if her classroom barbershop had a name.

“We can call it the Love Shop,” she said, smiling.

The boy with the clippers rolled his eyes, and continued shaving his friend’s head.