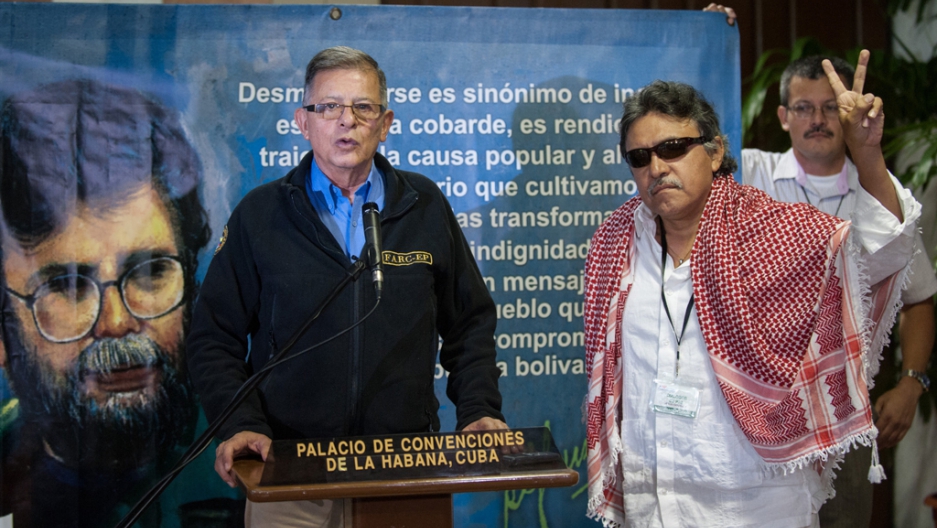 BOGOTA, Colombia — Headlines in the Colombian media labeled as “historic” Wednesday’s breakthrough in peace talks aimed at ending the country’s half-century-old guerrilla war. But the euphoria may be fleeting.

Negotiators for the South American country’s government and Marxist rebels announced they had reached a deal to allow the guerrillas to participate in legal politics should the fighting come to an end.

Until now, the rebels had stuck to their position that it was too dangerous for leftists to run for office in Colombia and that the only route to power was the warpath.

“What has been agreed to today represents a new democratic opening,” Humberto de la Calle, the government’s lead negotiator, told a news conference in Havana, Cuba, where the talks have been held since November 2012. “This will open up the path for peace to take root and for the conflict to end.”

Despite De la Calle’s upbeat speech, the mood in Colombia has been one of pessimism — even disbelief — that guerrillas of the Revolutionary Armed Forces of Colombia, or FARC, will ever lay down their arms.

President Juan Manuel Santos hopes a peace treaty will be his ticket to re-election in the May 2014 balloting. It still could be. Yet for Colombians impatient after years of false starts, the pace of the talks has seemed excruciatingly slow. The two sides so far have agreed on just two of the six points on the agenda after a full year of butting heads in Havana.

As a result, some politicians are painting Santos as soft on terrorism and naive about the true aims of the FARC, Colombia's largest rebel group, which has kidnapped thousands of civilians and relies on drug trafficking, extortion and other crimes to fund its war.

For a variety of reasons, Santos’ job approval ratings have plummeted since the negotiations began, and there have been murmurs of suspending the talks until after the May elections.

Leading the charge against Santos and the peace process is former President Alvaro Uribe, a hard-line conservative and one of Colombia’s most popular public figures, who is banned by the constitution from running for another term. Uribe has formed a right-wing political party whose presidential candidate, Oscar Ivan Zuluaga, has suggested that he would cancel the peace talks if elected.

For detractors, more evidence that the FARC is dithering emerged Tuesday, with the release of photos depicting the rebel force’s negotiators relaxing and smoking cigars aboard a catamaran in the Caribbean Sea just off Havana.

“What’s very worrying to me is the lack of public support for the government’s peace policy,” Daniel Pecaut, a French political scientist and an expert on the Colombian conflict, told Bogota newspaper El Tiempo. “I’ve rarely seen a president subjected to so many attacks from both the left and the right. It’s worrisome that such an important issue has failed to garner political support.”

In fact, polls show strong public support for peace talks with the FARC.

But they also suggest most Colombians don’t want their government to give too much away in order to make peace, according to Javier Restrepo, director of public opinion at Bogota-based Ipsos Public Affairs.

For example, in a September Ipsos poll, 72 percent of those surveyed said they would not accept demobilized FARC members participating in politics even if that meant breaking off the talks.

Explaining this dichotomy, Restrepo told GlobalPost that after a decade-long military offensive that severely weakened the FARC, many Colombians believe the guerrillas can be defeated on the battlefield — and that there’s no reason to provide major concessions at the peace table.

There’s also deep suspicion about the FARC’s true motives. During the last peace process in the early 2000s, the rebels didn’t give an inch in the negotiations while they used a specially designated “peace zone” where the talks were being held to train troops, stash kidnapping victims, and prepare for a wider war.

Many Colombians rushed to social media sites, which experts say have been a key pressure valve in the war-weary country, to express an array of emotional responses to the unexpected news.

“This Havana thing is like promoting my kidnappers to company manager as a bonus for their actions, a clean slate,” writes Martha de Restrepo, who identifies herself on Twitter as an Uribe follower in the Colombian city of Medellin.

Blogger Jose Carlos Garcia reacted differently. “At stake is not the signature on paper in Havana. It’s our viability as a nation able to overcome our demons,” he tweeted.

Of course, support for the current peace process could expand in the wake of Wednesday’s agreement.

Although many of the details have yet to be worked out, the two sides announced that in the event of a final accord, guerrillas who disarm and run for office would be provided with special security measures. Access to the media would be broadened and special congressional seats would be created for war-torn areas that could, in theory, boost the FARC’s political representation.

“Now that we are advancing and achieving results, this is not the time to stop the talks but to accelerate them,” President Santos said in a nationally televised speech Wednesday night.

“This has been a difficult path and it will become even more difficult,” Santos added. “That’s why I need your support. I need the backing of Colombians in this national endeavor.”