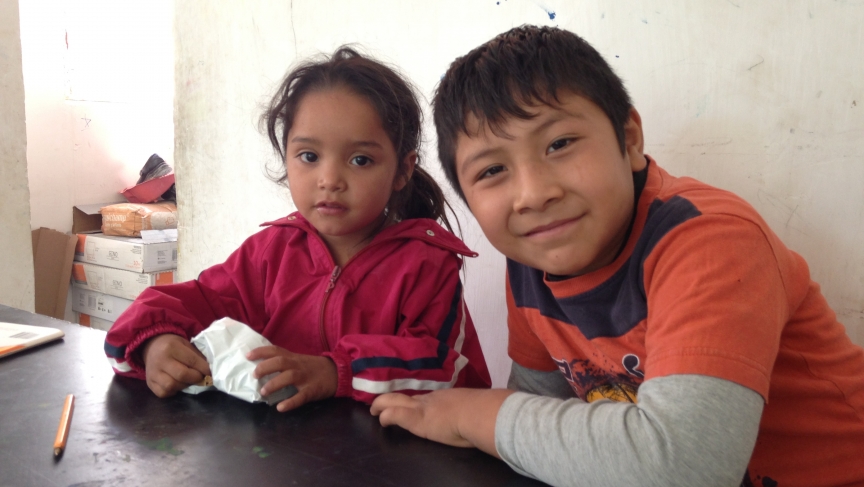 In the Mexican border city of Ciudad Juárez, children visit the new Los Soles study center in the city’s outskirts.

Many residents of the Mexican border city of Juárez are eager to say goodbye to one of the bloodiest eras in the city's history. For years, the city was the epicenter of a drug war that resulted in the death of more than 10,000 people here.

In his inaugural address, the new mayor of Juárez, Enrique Serrano, said that the city will no longer be distracted by bullets. Instead, he announced a $23 million investment in infrastructure improvement projects.

"The storm is behind us now," Serrano said. "Juárez has a promising future ahead."

Indeed, much of Juárez is breathing a sigh of relief. In 2010, the murder rate averaged eight people a day. Now, it is less than two per day. Local police have also reduced the number of kidnappings and car thefts. Once abandoned sections of the city are now alive with new businesses.

But by no means is Juárez rid of its violent past. On the western edge of the city is a former squatter community called Anapra. Drive down one of the few paved roads here and instead of sidewalks, you’ll see margins of desert sand littered with potato chip bags and threadbare socks. Women push rickety strollers and lug grocery bags across a treeless terrain. The place is known for being a recruitment zone for organized crime.

It’s also a place where Lourdes Contreras is trying to make a difference. She’s 46 and grew up in Anapra. She knows there’s little opportunity here. So, a year ago, Contreras decided to open up a study center for troubled youth. It's called Los Soles, named after the sun.

Inside, children sit at a tiny table scribbling with markers. Others practice multiplication tables. In the kitchen, a volunteer mother heats up tortillas for lunch. Up to 70 kids stream through here on any given day.

Many of the children were abandoned and abused. In some of their notebooks, they draw pictures of bleeding hearts and stick figures shooting bullets from a car.

One of the more extreme cases is that of Kimberly, a curious 4-year-old who wears black Mary Janes.

In an interview, she innocently offered fragments of the horror she lived — how she witnessed her parents getting murdered earlier this year. They were left tortured and bound inside their home. Kimberly spent the night hugging their corpses. The next morning, she turned up at her grandma's house, soaked in their blood.

Los Soles survives off individual donations and fundraising by its volunteer staff. When drug violence in Juárez peaked, the federal government invested $250 million to support violence prevention programs like it. But that money has mostly run out.

"The longstanding problems of Juárez — lack of opportunity, poor schools — remain and are only improved by the actual efforts of private citizens themselves," said Howard Campbell, an anthropology professor in neighboring El Paso. He has written about Juárez and researched it extensively.

There's only so much the volunteers at Los Soles can do. Most are mothers and grandmothers who never finished school. They help the kids with their homework, provide a little food and encourage them to stay out of trouble.

But the odds are against the kids. As long as there's profit to be made smuggling people and drugs across the border, these children will continue to be courted by organized crime.

"Consequentially, you have fertile ground for another round of violence and social problems in Juárez," Campbell said.

For now, the people of Anapra are enjoying a tenuous peace, while the volunteers at Los Soles work in hopes of a better tomorrow.