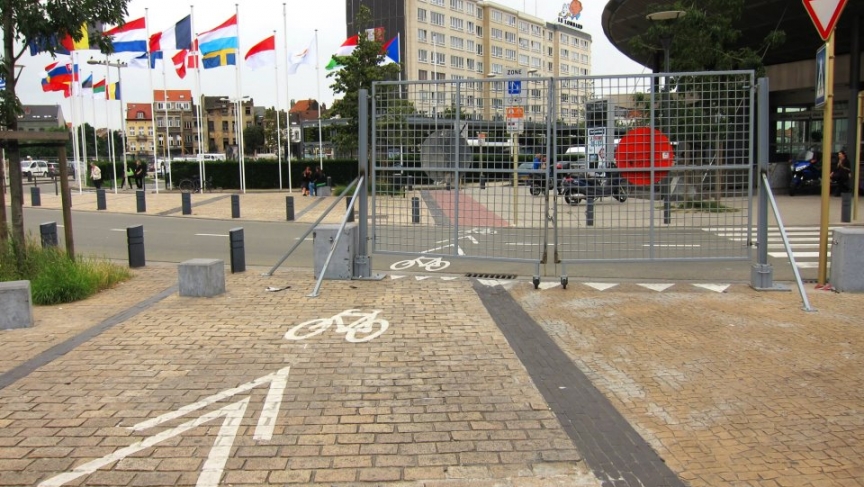 I had been living in Brussels for about a year when I stumbled on David Helbich’s utterly brilliant Facebook page, a collection of photos enshrining what he calls “Belgian Solutions.”

I had no idea whether Helbich was Belgian or not. But I did know this: he seemed to be almost perfectly documenting the surreal things I saw every day on the streets of the Belgian capital, the kinds of things I would snap with my camera phone and send along to my wife with a cheeky “WTF?” attached.

At the time, I vaguely thought about contacting Helbich and maybe doing a radio piece on him. But I worried about how to translate the funny. I worried about the constant scream of the editors to “make it relevant.” I mean, it was relevant to me because I was living it. But you, dear reader — we worry constantly about whether you’ll care enough, whether you’ll find Belgian solutions relevant enough, to read on.

All this to say that it wasn’t until I returned stateside that I realized just how big a chord Helbich and his pictures had struck, both with me and with a growing number of fans and fellow Belgian solution seekers. From afar, I’ve watched the page grow steadily over the past year. I’ve watched contributors start to send in their own Belgian solution photos, not just from Belgian cities like Antwerp and Bastogne, but also from faraway places such as Athens and Baghdad. It came as no surprise when I read last month that Helbich put 300 of his best photos into a new book, titled "Belgian Solutions."

I decided it was finally time to send the email. Relevancy be damned, I was going to talk to David, and ask him about the book.

“It’s a small book, postcard-sized,” Helbich laughed down the line recently from the BBC studios in Brussels. “You don’t have to look at it all in one go. It’s a perfect bathroom book.”

It turns out that Helbich is German, born in Berlin and raised in Bremen. After a stint in doing social work in Holland, he ended up in Amsterdam studying musical composition. He then moved to Freiburg, Germany for a couple of years, but missed being in a bigger city. He had friends in Brussels, and a good feeling about the city.

“I was jumping around between dance, music, choreography, installation art. I didn't know what I was doing, and I didn't want to know. And in Brussels — maybe it has to do with the character of this city, it's such a melting point for nations and ideas and identities — I thought that that this was the right place to go.”

And then he started to notice a theme emerging.

“Maybe it came with an understanding of the city, but I started to see things other people wouldn't see immediately. A cable hanging out there, isn't that weird? Then you realize the whole city is kind of taped together. I think Brussels has like, these layers. On the ground, it's like a puzzle. On the human level, it's taped together. And then from the sky, there are hanging cables.”

Truly, the evidence is everywhere. Look around and you’ll see staircases that disappear into solid brick walls; construction fences redeployed by picnickers as windbreaks along a canal; electrical wires so jerry-rigged that you’re amazed the entire city block hasn’t been consumed by a giant fireball.

On the face of it, these sound more like candidates for your standard fail blog — the kinds of things that get tons of web clicks,  but do little but make fun of someone else’s misfortune or stupidity.

Take a closer look, though, says Helbich, and focus on the solution, not the fail.

“The staircase that ends in a wall: I called this a solution, not a failure. At one time, it made sense. Then somebody just closed the door and thought, ‘Hey, let’s keep the staircase, because someone might want to sit on it, or something.’ It looks incredibly absurd, almost surreal, but on the other hand it also makes sense.”

Helbich started to share the photos in an album on Facebook, both to see what the reaction would be and to get others involved in the project.

Another of my favorite Facebook photos shows a bright yellow, 50 foot extension cord snaking out of the back of a Toyota Prius parked on the street. The cord runs across two sidewalks and another street before ending up in a nearby convenience store.

Surreal, yet somehow sensible. That is the essence of a Belgian solution.

“I’m not so interested in laughing about how badly somebody failed,” Helbich says. “I’m more interested in seeing that someone found a funny way to solve a problem he had there at this moment.”

Of course, he notes, “Everything that’s a little bit funny in Belgium also has a little sad side.”

And that’s true. In their own way, these Belgian solutions are a kind of metaphor for the taped together nature of the entire country, divided as it is among Dutch speakers, French speakers, and a tiny German-speaking community. The regions of Flanders and Wallonia each have their own Parliaments with as much power, in some ways even more, than the federal government. And in the middle sits Brussels, the only officially multi-lingual part of the country, with its OWN parliament.

Each little part of Brussels comes complete with it’s own mayor, and its own legion of city hall workers.

But wait, there’s more. Don’t forget Brussels is the capital of Europe, the seat of the European Union which directs its 27 member states on how things should be done.

Amid all these layers of rules and regulations, you’d think it would be impossible not to solve problems quickly and efficiently. But instead, notes Helbich: “It's an example of how too much bureaucracy can, in the end, lead to a certain kind of anarchism.”

When you think about it that way, you aren’t surprised when you see a dedicated bike path run directly into a steel fence near one of Brussels’ main train stations. It doesn’t matter whether the fence makers bisected the bike path, or the bike path guys said to hell with the fence in front of them. Both are right, and both are wrong. Both failed, but also managed to solve their respective problems.

And in so doing, Helbich emphasizes, made us laugh by giving us a beautiful little piece of surreal art.

“Somehow Belgians are very conscious of the fact that nothing is fixed. People don't care in the end. It just enriches the whole thing. And maybe it gives a certain sense of nothing, and yet everything is changeable. And that's incredibly inspiring for an artist.”

“Or maybe even for people in politics. You can always think, ‘Okay, we don't have to conserve the state of being. We are ready to change everything, because everything is already quite open somehow.’”

Belgium, of course, put that to the test in recent years, going for more than 500 days without a government. And yet, the tape held. After months of negotiation, a government did manage to form, and, for now at least, Belgium’s still a single country, a semi-functioning democracy with many little democracies inside of it.

I couldn’t resist asking him if there was a lesson in here for the US government and its recent shutdown woes.

“Take it all with a bit more humor,” Helbich said. “When I read about American politics, people are incredibly cramped, if you take my meaning. They're so forced, and things are so exaggerated just to make a point.”

And when humor’s not enough?

“Why don't you just tape it? Duct tape will solve it. Voila.”

At the end of our interview, I asked Helbich whether the linguistic and cultural divides in Belgium played out at all on his site. He told me no, things have not fractured into Flemish Solutions and Wallonian Solutions. He says the biggest arguments aren’t about the Belgian part, but about whether something really qualifies as a solution.

Still, he jokes, now that his book has become a hit and more people know about him, he has wondered whether it might be time to disappear for a while. But secretly, he says, he’s hoping that the phrase “Belgian Solutions” gets into the dictionary, in all three of the country’s official languages.

I can already see something in the style of the Belgian painter Rene Magritte’s famous "pipe that is not a pipe" painting.

Picture any of the photos below with a caption that reads: Ceci n'est pas une solution.