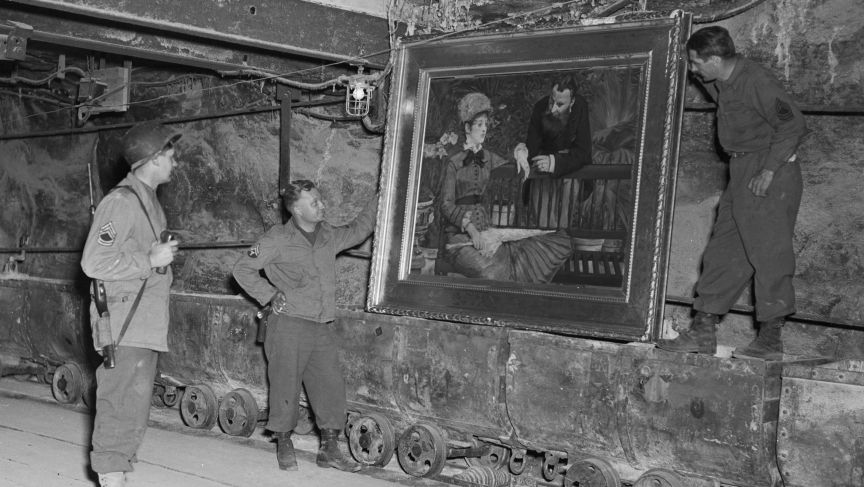 U.S. soldiers examine the painting, "Wintergarden," by French Impressionist painter Edouard Manet, stolen by the Nazi regime and hidden in a salt mine in Merkers, Germany April 15, 1945.

Over the weekend, the German weekly magazine Focus broke the story that German police had found an enormous trove of modernist paintings crammed in an apartment in Munich.

The pieces include works by the likes of Picasso, Matisse, and Chagall — masterpieces thought to have been lost or looted from Jews during World War II.

It seems police first discovered the paintings more than 2 years ago in 2011 by chance, when tax authorities were investigating Cornelius Gurlitt. He had been caught in a border check aimed at finding Germans with undeclared foreign bank accounts.

The paintings — around 1500 — were reportedly crammed in his apartment between canned food and empty juice cartons.

Cornelius Gurlitt is the reclusive son of art dealer Hildebrant Gurlitt, who "was very much involved in the wheelings and dealings of the art world under the Nazis," says Webster.

"It's a very strange story. Gurlitt was actually one-eight Jewish. He was a museum director... in the very east of Germany... and it seems to have been his expertise that attracted the Nazis to him. And he was asked to investigate artwork that would be suitable for Hitler's personal collection."

After the war, Gurlitt claimed he was a victim of the Nazis and managed to escape punishment. He also claimed that the artwork had been destroyed during the war in the firebombing of Dresden in 1945.

It's unclear why the German government did not reveal its discovery of the art in 2011. Webster says the complexity of authenticating the paintings and handling the likely requests for restitution to the former owners may be a reason.

"This is a huge can of worms and I think that's why the discovery of this trove of art was covered up," she says.

So did Hildebrant Gurlitt actually save the paintings for posterity, since the Nazis viewed much of the modernist art as "degenerate" and burned many paintings?

"I would hesitate to call him a saviour," says Webster, "but it may well be that he rescued works of art that were destined for the bonfires, either to sell them off to private dealers or for his own collection."