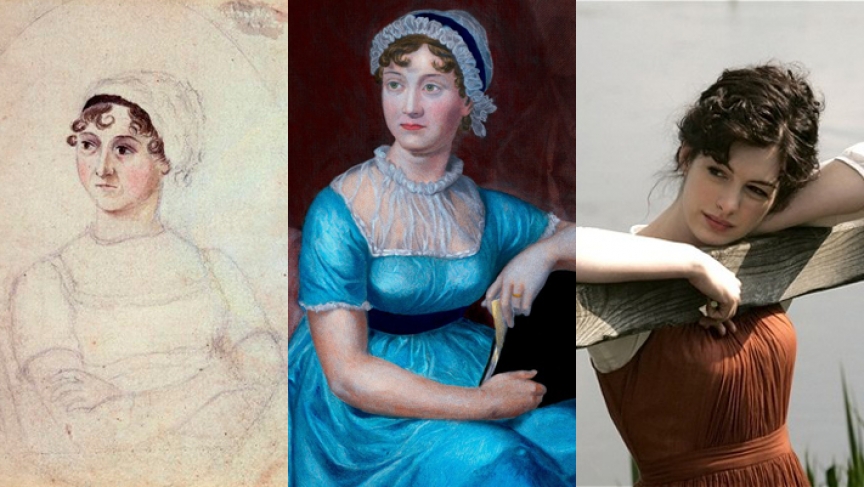 Give or take a few anti-feminist hecklers on Twitter, the choice of Austen has been a popular one. That’s been the easy part. Choosing how to portray Austen has been far more vexing. Jane Austen, after all, is something of British national obsession. People do not agree about who the “real” Jane Austen was, as the Bank of England has discovered.

“We heard that the bank was going to put Jane Austen on the banknote and I emailed them a portrait that we considered was suitable,” says Elizabeth Proudman, who chairs the Jane Austen Society.

There’s not much to choose from when it comes to pictures of Austen. There are a couple of purported images of the novelist. But the only undisputed contemporary portrait is a sketch from 1810, done by Austen’s sister Cassandra.  Austen sits unsmiling, a little tired looking, her arms crossed.

Not attractive enough, it seems, for a £10 note.

There’s another picture. It was published in a biography of Austen 60 years after the sketch. It was somewhat based on it, but jazzed up: a rounder face, no sign of fatigue, bigger eyes and a nice frilly bonnet.

“This is the best image of her we can have,” says Proudman.

And that’s what the Bank of England thinks, too. But not Austen biographer Paula Byrne.

“It’s a Victorian, highly sentimentalized makeover,” says Byrne. “She looks like a doll.”

If Jane Austen looks like a doll, what does that say about her novels? Are they really that cosy and cuddly?

“She’s a subversive writer,” says Byrne. “She’s a feminist, she writes about social class. It perpetuates this ridiculous myth about the safe Jane Austen.”

So much for agreement over putting Austen on Britain’s currency.

Still, if the late Victorians airbrushed Austen, they didn’t go nearly as far as we have.  Anne Hathaway, star of the 2007 movie Becoming Jane, is as glamorous as that 1810 sketch is not.

Of course, the argument about Austen’s image isn’t just about her, or feminism. It’s also about the people that Brits choose to memorialize: upholders of power, or those who rail against it.

Jane Austen may or may not have much to do with that larger debate; alas, she’s not around to chime in. It’s a good thing, really, that she created characters who have lived on, and been re-interpreted time and again — in Britain and far beyond.

The World in Words podcast on iTunes