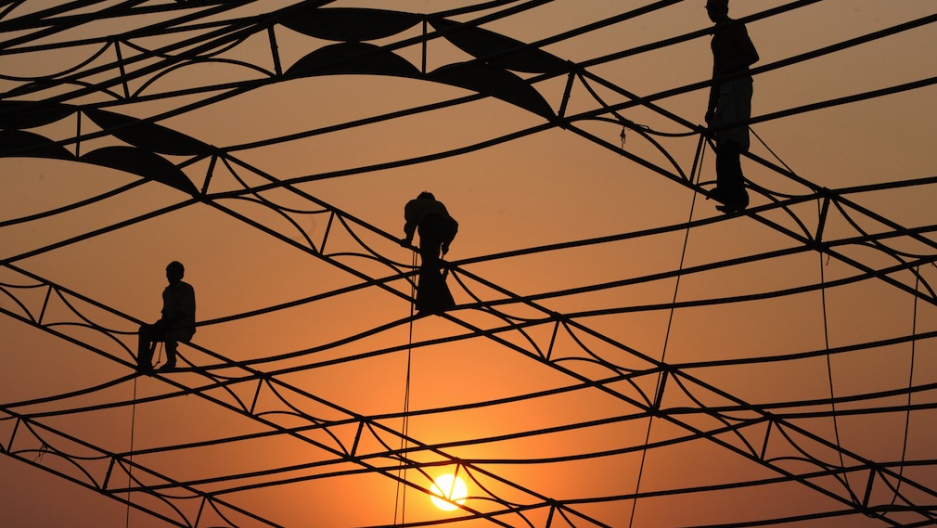 NEW DELHI, India — “A man never begins by presenting himself as an individual of a certain sex; it goes without saying that he is a man," wrote Simone De Beauvoir in The Second Sex.

What it’s like to be male, therefore, is easy to overlook.

A project called “Let’s Talk Men” addresses this vacuum, by challenging South Asian filmmakers to create works of fiction and non-fiction from a male point-of-view.

Consider the life of Bunty.

Indian audiences met him fourteen years ago, in “When Four Friends Meet,” a documentary examining life in a New Delhi slum from the male perspective.

Back then, Bunty was sweet and shy, full of happy dreams. But his dreams have been shattered.

In “When We Meet Again,” a recently released documentary that revisits the friends, we learn that his wife died after accidentally electrocuting herself at home. A younger woman is imported from a poor village to be his new wife and a substitute mother to his two children.

By day, Bunty works as a salesman for Vodafone India, the nation’s third largest mobile operator. At night, he zips around on a scooter delivering “Indian and Chinese” food to the city’s better-off residents. In between meeting the needs of work and family, he is having an extra marital affair.

All four of the films in “Let’s Talk Men” take us into the underprivileged milieu of South Asian men struggling to survive in a fast-changing world, and left behind by a lack of education, access and experience.

In “Men At Work,” for example, Nepali filmmaker, Kesang Tseten introduces us to a series of vignettes taking us into predominantly male worlds: a lonely young boy employed as a ‘servant’ in a wealthy home; young mechanics at a repair garage; children in training to be priests at an ashram; and Nepali youth getting ready to serve the British Army as part of its Gurkha regiment.

In Pakistani film“Zinda Bhaag,” which released in the US this October, three friends experience an unequal challenge as they try to elevate their economic situation by “doing the dunky” — illegally immigrating to Europe to earn better salaries.

By examining the embattled male, the filmmakers shed light on how the struggle to survive and succeed impacts how these men behave — and at times how they lash out at the women in their lives.

“The moment we talk about women, the gender aspect jumps out of you,” says the bespectacled and bearded Rahul Roy from behind his desk in the home-based production office he has built with his wife, filmmaker, Saba Dewan. Men, on the other hand, escape responsibility for any actions they might take as men, unless they have committed a serious crime.

Given his mandate, Roy’s location in New Delhi is illuminating.

The city has long been notoriously unsafe for women, a reputation fortified by the brutal 2012 gang rape and death of a young woman on New Delhi bus. The incident launched widespread protests and citywide programs to create a safer environment for women.

In Roy’s documentary, three of the four men, including Bunty, represent the typical South Asian male. Conversations about handling women who rebel – including their wives – reflect the mindset that resulted in so much outrage following the 2012 protests against mistreatment of women.

In one scene we see the men laughing about how a woman needs to be beaten up a little bit when she misbehaves, to set her right.

"In the first film there was a lot of sexism and misogyny in the way girls and women were talked about," reflects Roy. "Now, to see them in their relationships — to see it at work — was very, very disturbing."

The tragedy, however, is in the 14-year change.

As India explodes with commercialism, a real estate boom, and billboards advertising American style picket-fence housing projects, and the latest gadgets, Roy’s documentary remind us just how wretched it is to be part of the underclass, to be one of the under-privileged whose lack of education, class, caste and location prevents his passage into a better life. His characters represent the country’s urban poor, most of who can’t seem to climb out of poverty no matter how hard their work.

When he first started filming them, Roy remembers feeling connected to the four friends.

“I could see so many similarities in spite of the class, cultural and education differences,” says Roy thinking back on the first film. “It really surprised me that I could see myself in these boys. Upon returning to film them more than a decade later, much of this similarity has changed.

Bunty’s friend Sanjay, who drives an auto rickshaw 12 hours a day, smiles when his four year old looks into the camera and says, “My papa hasn’t become anything. He’s just an auto driver.”